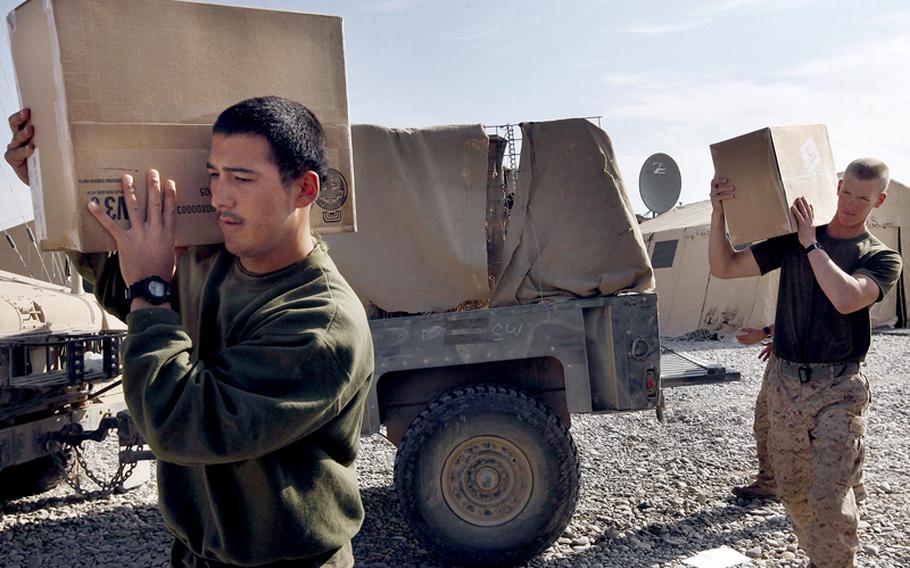 NAPLES, Italy &mdash; The Defense Department is unable to track billions of dollars in supplies or ensure on-time delivery to units in Afghanistan, according to a Government Accountability Office report released last week.

While the Pentagon has made strides in tracking everything from vehicles to food in one of the &ldquo;harshest logistics environments on earth,&rdquo; more needs to be done, the Oct. 7 report states.

The lack of data on meeting required delivery dates is among the biggest problems, the GAO reported.

For shipments with complete data in the same period, 42 percent of unit shipments and 63 percent of sustainment shipments arrived late, with the majority arriving more than one week late.

But without accurate and complete data on when shipments are delivered, DOD lacks the information needed to assess its performance and to take actions to improve timely delivery.

The lack of data also impedes the collection of information on theft and damage to shipments.

And tracking shortfalls have sometimes resulted in cargo convoys languishing at the front gates of bases because the unit receiving the delivery has no way to know the gear has arrived, the GAO states.

Part of the problem lies in blurred lines of responsibility, according to the report. TRANSCOM stops tracking supplies once they arrive at the major logistics hubs such as Bagram and Kandahar air fields in Afghanistan.

Once in country, U.S. Forces-Afghanistan, or USFOR-A, has many systems for tracking cargo when it&rsquo;s in transit and delivered, the report states.

&ldquo;The fragmented nature of DOD&rsquo;s chain of command for distribution to Afghanistan ultimately limits visibility, control, and accountability for items needed by the warfighter,&rdquo; the report states.

The GAO makes 15 recommendations for the DOD to improve the supply systems, among them that U.S. Central Command have USFOR-A report its data to Transportation Command and that TRANSCOM incorporate the information to provide a more complete data set.

DOD officials agreed with most of the recommendations, but not that TRANSCOM should oversee the final leg. They cited the surge of 30,000 troops into the war zone as part of the problem of tracking some items.

Yet many of the issues identified in the report are &ldquo;systemic&rdquo; and have been reported over the past several years by the GAO and other organizations, the report states.

&ldquo;We are concerned,&rdquo; the report states, &ldquo;that DOD&rsquo;s comments indicate that the Department does not fully recognize the significant challenges that confront its global distribution system in supporting operations in Afghanistan and that only limited progress will be made to address the problems we identified in this report.&rdquo;