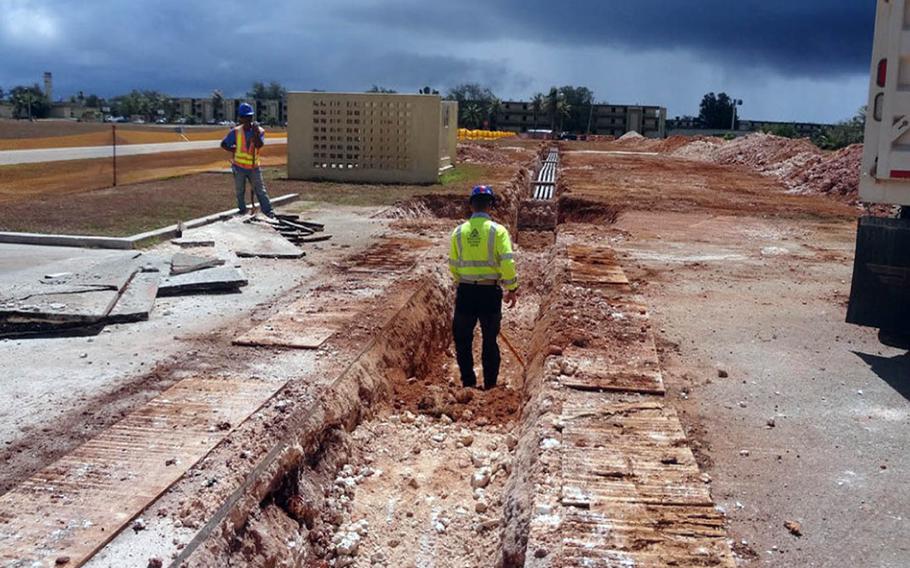 Technicians work at removing unexploded ordnance discovered at a utilities construction site on Guam. The Defense Department has spent years planning to move about 4,100 Marines from Okinawa to Guam, 2,700 to Hawaii and 800 to the U.S. mainland. (Courtesy of the U.S. Navy)

The Marine Corps does not yet have a reliable schedule for relocating troops from Okinawa to Guam, despite years of planning and infrastructure improvements underway on the U.S. territory, a government watchdog says.

Marine Corps planning in particular lacks a contingency for delays caused by labor shortages and endangered-species protection in the dozens of construction projects required on Guam over the next five years, the Government Accountability Office said in a report released Wednesday.

“If [the Defense Department] does not have a reliable schedule or has not completed risk planning for Guam, it may not have complete information to identify and address risks that may result in cost overruns and schedule delays,” the agency said in the redacted public report.

The relocation plans were the result of sustained public pressure by Okinawans on U.S. and Japanese officials to lessen the American military presence on the small island south of the mainland.

Plans call for Marines to relocate to Guam between 2022 and 2026. Construction is underway in the northern part of the island on and near Andersen Air Force Base. Training ranges are planned on Tinian and Pagan islands in the nearby Commonwealth of Northern Mariana Islands, but those proposals have met strong opposition from locals.

The DOD estimates construction costs on Guam and the CNMI islands to be $8.7 billion in fiscal year 2012 dollars, the GAO said. Japan will pay roughly $3.1 billion of that.

The GAO report found that Marine Corps officials have not thoroughly completed a risk-management plan to address construction risks that could affect the cost and scheduling for overall infrastructure improvements on Guam.

A risk-assessment strategy is necessary because the Marine Corps will have 15 active construction projects on Guam by 2018, with 43 projects expected to be ongoing by 2021.

While the Marine Corps has analyzed risks on a project-by-project basis, it “has not identified its strategy for the collective impact of risks to infrastructure resulting from an increase in construction projects,” the report said.

Building contractors expect the need for 2,800 foreign workers during the peak of construction, and both Navy and Guam officials told the GAO that getting visas for such workers is difficult.

There is also a good chance that the discovery of unexploded ordnance and cultural artifacts could delay projects, the report said.

“For example, the Marine Corps has plans to build a live-fire training range on the northwest end of Guam that may require the discovery and preservation of artifacts on 21 sites that, according to the Navy, are eligible for listing on the National Register of Historic Places, which may result in additional costs or schedule delays,” the report said.

The Navy has already delayed two construction projects due to the discovery of endangered species of butterflies and orchids, the report said.

DOD concurred with the GAO’s recommendation that the Marine Corps update its master schedule for overall relocation.