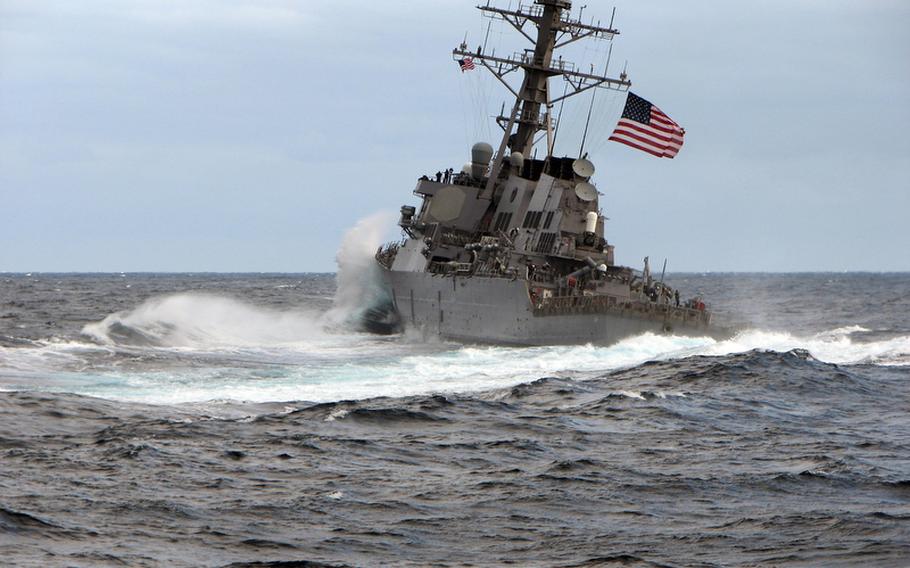 Waves crash over the bow of the guided-missile destroyer USS Carney. The Carney is one of four ships that the U.S. Navy plans to base in Rota, Spain, to support President Barack Obama?s phased, adaptive approach for missile defense in Europe. (Anthony J. Sganga/U.S. Navy)

Waves crash over the bow of the guided-missile destroyer USS Carney. The Carney is one of four ships that the U.S. Navy plans to base in Rota, Spain, to support President Barack Obama?s phased, adaptive approach for missile defense in Europe. (Anthony J. Sganga/U.S. Navy) 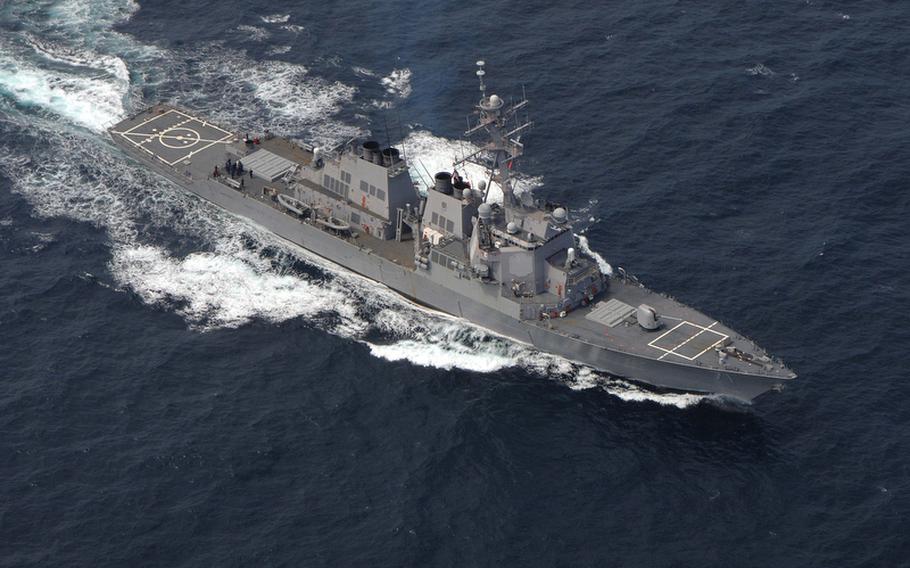 The guided missile destroyer USS Ross, seen here under way in the Atlantic, is one of four ships the U.S. Navy wants to base in Rota, Spain. The Government Accountability Office said basing the ships in Rota might not be the most cost-effective or efficient option for the Navy, which is facing budget constraints. (Michael Sandberg/U.S. Navy) 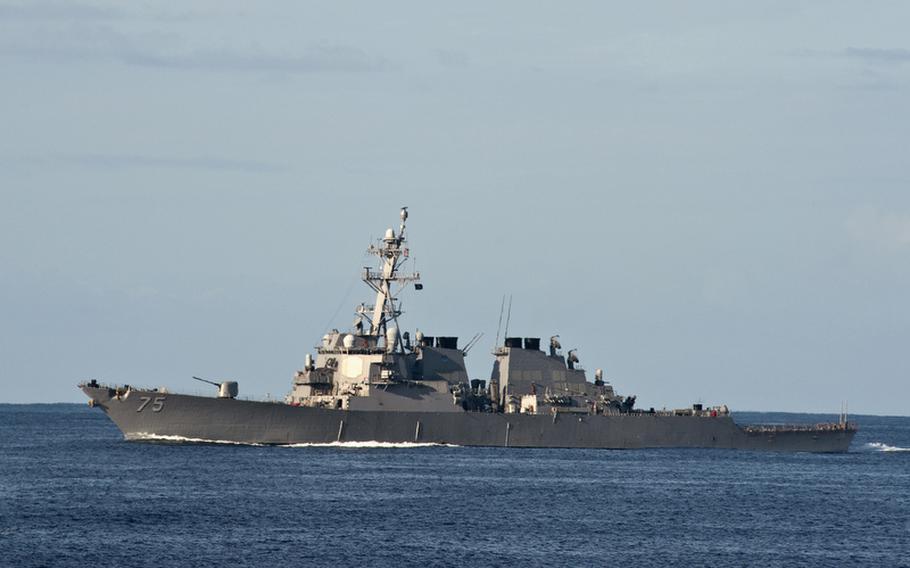 The guided-missile destroyer USS Donald Cook heads for a scheduled deployment in the U.S. 5th and 6th Fleet areas of responsibility in 2011. The Donald Cook is among four ships the U.S. Navy wants to base in Rota, Spain. (Scott Pittman/U.S. Navy) 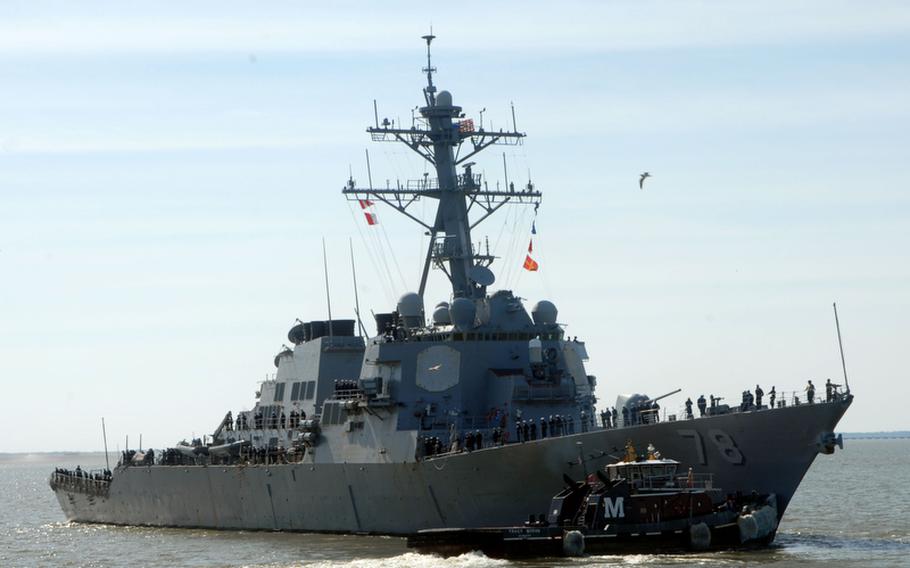 Tugboats assist the guided-missile destroyer USS Porter as it departs Naval Station Norfolk, Va., in March. The Government Accountability Office is questioning the Navy&#39;s analysis of cost savings in the service&#39;s decision to base the Porter and three other ships in Rota, Spain. (Kayla Jo Finley/U.S. Navy)

KAISERSLAUTERN, Germany &mdash; The Department of Defense has yet to fully calculate the cost of significant force posture changes in Europe, including the withdrawal of two combat brigades and a plan to permanently station four Aegis-class destroyers in Spain, a Government Accountability Office report concludes.

The GAO reviewed the two DOD decisions affecting forces in Europe at the request of the Senate Armed Services Committee, according to the report, examining the extent to which the Defense Department analyzed the associated costs and savings.

In reviewing the Army reductions in Europe, the GAO report said the full cost savings from eliminating two combat brigades in Germany can&rsquo;t be determined until the Defense Department better defines its plans for rotating forces to the region from the United States.

&ldquo;The general sense is, if you bring forces home, it saves the government money over time,&rdquo; said John Pendleton, GAO Defense Capabilities and Management director and a lead author of the report, released this week. But DOD officials have told Congress that &ldquo;there are costs associated with bringing troops home,&rdquo; such as the need for more troop rotations overseas, he said.

&ldquo;I think it&rsquo;s fair to say the department made the decision to return forces from Europe before they worked out the details on how they&rsquo;re going to do the rotations,&rdquo; Pendleton said.

GAO staffers aren&rsquo;t saying those details should have been worked out ahead of time, Pendleton said, but it&rsquo;s important &ldquo;they start to decide now,&rdquo; for transparency, planning and budgeting purposes. &ldquo;You don&rsquo;t want to give an installation back,&rdquo; and then not have a place to house rotating troops, for example, he said.

&ldquo;It&rsquo;s certainly expensive to have people forward-stationed. It&rsquo;s also expensive to pick them up from the United States and carry them forward to do training,&rdquo; he said.

The review comes as the Pentagon looks to rebalance its forces overseas, to reflect new strategic priorities and save money in the face of budgetary pressures. Some lawmakers in Washington have expressed a desire to see more base closures abroad, particularly in Europe.

In addition to the troop drawdown, the Defense Department announced last year that the U.S. will permanently station four Aegis-equipped ships at Naval Station Rota &ndash; two ships in fiscal 2014 and two in fiscal 2015, the GAO report notes. The ships are to support President Barack Obama&rsquo;s phased, adaptive approach for missile defense in Europe.

&ldquo;The Navy concluded that forward stationing ships was the most efficient option, but GAO found that it did not fully consider the option to rotate crews from U.S. bases and, in a classified analysis, it used different assumptions for forward stationing versus deploying from the United States,&rdquo; the report says.

Basing ships in Rota may be the &ldquo;most straightforward, expeditious way&rdquo; to support the Navy&rsquo;s ballistic missile defense mission in the region, Pendleton said, but &ldquo;they could not show us the full costs over the long term.&rdquo;

The Navy said keeping forces and ships in Rota requires significantly fewer ships overall in the fleet to meet European missile defense requirements, Pendleton said. But the Navy&rsquo;s analysis didn&rsquo;t account for the long-term maintenance costs of keeping ships at a forward location, which can be higher than for ships stateside, he said.

The GAO report also said the Navy provided little documentation for its analysis of the rotational crews&rsquo; option, one that avoids permanently relocating ship crews and their families.

&ldquo;GAO recommends that DOD conduct a comprehensive cost analysis associated with the Navy&rsquo;s decision to station ships in Rota, assess options and costs related to rotating forces in Europe, and clarify roles and responsibilities&rdquo; for collecting cost data, the agency said in a summary of its recommendations.

In a response, attached to the GAO report, DOD officials disagreed with the study&rsquo;s recommendation &ldquo;that additional analysis is required to evaluate ballistic missile defense requirements in the Mediterranean.&rdquo;

&ldquo;There are no plans for any changes or delay with regard to our ships to Rota, Spain, as part of the European Phased Adaptive Approach,&rdquo; Pentagon spokeswoman Cmdr. Wendy Snyder said in an email Friday.

Regarding the Army&rsquo;s planned force reduction in Europe, the DOD concurred with the agency&rsquo;s recommendation that it identify and assess options to rotate forces in Europe and their associated costs. DOD noted that the Army is currently studying costs and options for rotating personnel and equipment through Europe for training and exercises with allies and partners.

The GAO report said the planned Army reductions in Europe &mdash; including the removal of two heavy brigade combat teams, a corps headquarters and various combat support and service support units &mdash; will likely save money, but to what extent is uncertain.

A 2010 Army analysis found $2 billion in savings over 10 years by returning forces from Germany, but assumed that facilities estimated at $800 million would need to be built in the United States to house them.

But in February, it was announced that the 170th Infantry Brigade in Baumholder and the 172nd Separate Infantry Brigade in Grafenw&ouml;hr and Schweinfurt would be eliminated from the Army&rsquo;s force structure as part of larger end-strength reductions.

&ldquo;Given this force structure reduction, the savings to the Army and DOD could be billions more because the costs of manning and equipping two brigade combat teams (with approximately 4,000 personnel each), among other units, would no longer be incurred,&rdquo; the report says.

But the same 2010 Army analysis said it could potentially cost the Army about $1 billion over 10 years to rotate two brigade combat teams to Europe twice a year. Army officials told the GAO team, however, that they are considering rotating smaller formations, such as companies or battalion-size elements, the report says.

Decisions about the size and frequency of those rotations &ldquo;will be a key cost driver,&rdquo; the GAO report says. &ldquo;Costs will be incurred not only to pay for the rotations, but assumptions about these rotations will also be used to decide which Army installations in Europe to retain.&rdquo;