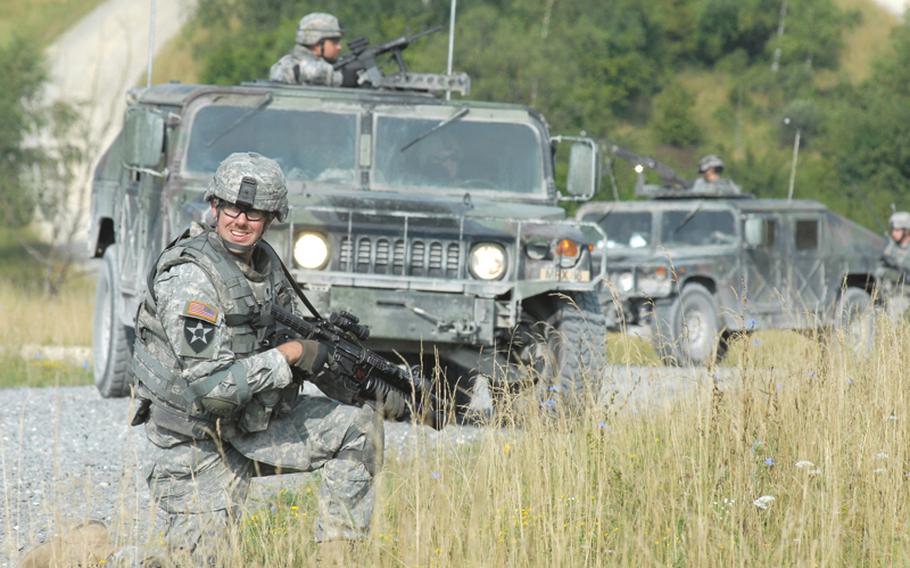 A 172nd Infantry Brigade soldier scans for trouble during training at Grafenwohr, Germany, in 2008. A recent GAO report said the Army does not have an adequate plan to meet the training needs of its brigade combat teams in the coming years. (Seth Robson/Stars and Stripes)

The Army does not have an adequate plan to meet the training needs of its brigade combat teams in the coming years, according to a recent Government Accountability Office report.

The current plan &mdash; known as the Army Force Generation model &mdash; calls for the service&rsquo;s fighting units to take part in 36 or 37 training rotations each year, the GAO report said, but the Army&rsquo;s three maneuver combat training centers are only staffed to run 28 such rotations annually.

And even though the Army plans to increase its rotations by six each year using an Exportable Training Capability &mdash; during which trainers travel to the unit&rsquo;s home base instead of the units traveling to the training center &mdash; it would still not be enough to meet current requirements, the GAO stated.

Under the Force Generation model, brigade-sized elements should conduct two maneuver exercises before heading back to a combat zone. One concentrates on basic skills and the unit&rsquo;s general mission, with the other focusing on a rehearsal of the tasks the unit will face in an upcoming deployment.

How this shortfall could affect future operations in Iraq or Afghanistan is unclear, the report noted.

&ldquo;The Army has not completed an assessment to determine its full range of options for meeting future brigade combat team training requirements, or the risks associated with not conducting the desired number of training rotations.&rdquo;

Army officials did not respond directly to a question Thursday about whether the shortage of maneuver training rotations would have a negative effect on brigade combat teams&rsquo; readiness, though they did note that the service has instituted a number of innovations, such as mobile training teams, home-station training, and modern simulation training.

The 42-page report, issued last week, also touches on training conducted by the U.S. Marine Corps, adjustments at training centers as the military shifts focus from Iraq to Afghanistan and training opportunities for National Guard and Reserve forces.

In a letter included with the report, the DOD largely agreed with two of the GAO&rsquo;s recommendations.

One recommendation is that the Army explores all options for training its brigade size units and identifies risks involved if some brigades don&rsquo;t receive such training, according to a letter from Samuel Kleinman, the Defense Department&rsquo;s deputy undersecretary of defense for readiness.

The GAO also suggested the Army study how seven mobilization training centers are used to train smaller reserve element forces and determine if the facilities and training are adequate.

Kleinman wrote that the two issues are already under review and the Army has adjusted training rotations until long-term solutions can be found. Those adjustments have often been to give priority to units about to deploy as opposed to units who are honing skills and aren&rsquo;t deploying, according to the report.

For the complete GAO report on the Army's brigade plan, go to www.gao.gov/new.items/d10720.pdf