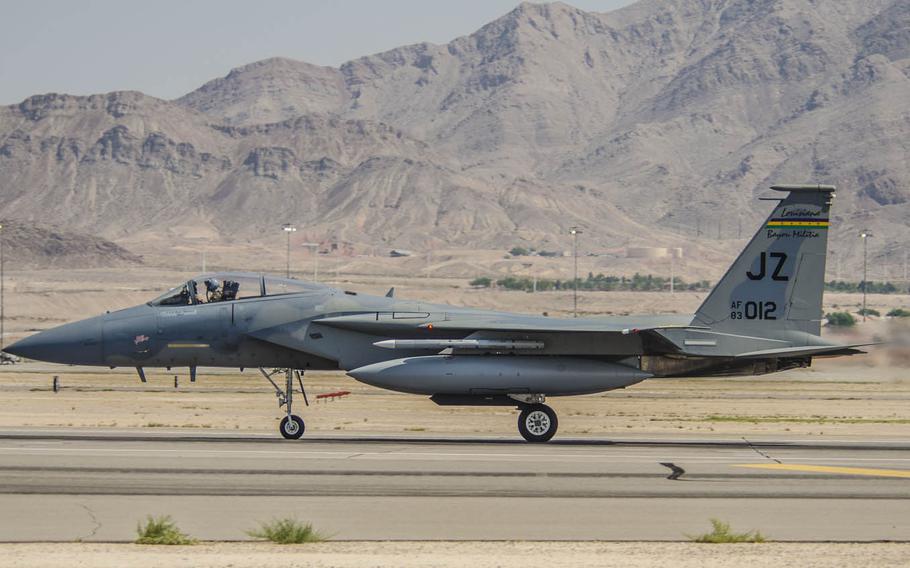 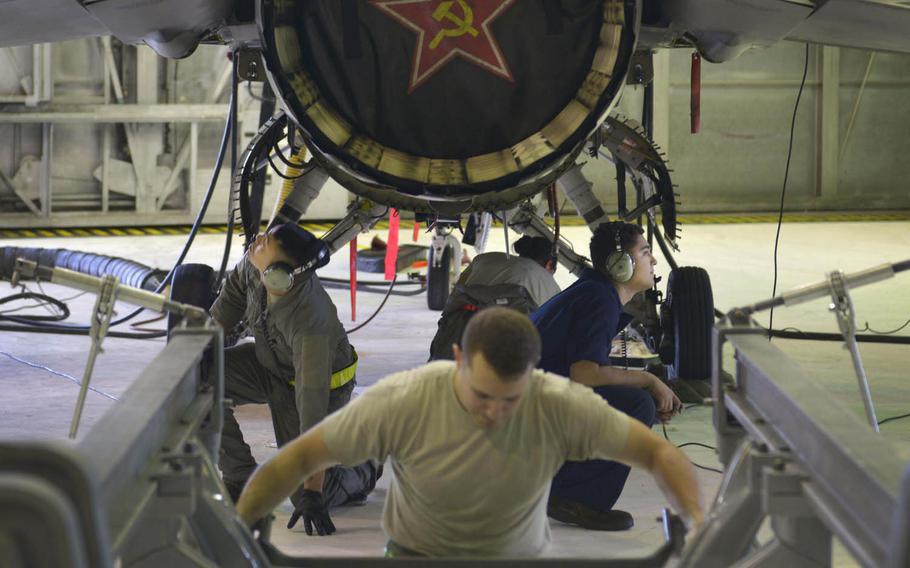 Airmen from the 354th Maintenance Squadron work on an F-16 Fighting Falcon during Red Flag drills last month at Eielson Air Force Base, Alaska. The 18th Aggressor Squadron used F-16s to simulate adversaries during the exercise. An audit by the Government Accountability Office found that playing the role of the "enemy" during exercises is one reason fighter squadrons are not receiving full core-mission training. (Isaac Johnson/U.S. Air Force)

But the Government Accountability Office says those unmet requirements for the full range of core missions might not reflect current and emerging training needs and threats because the Air Force has not comprehensively assessed the assumptions underlying them, such as “the total annual live-fly sortie requirements by aircraft” and the “criteria for designating aircrews as experienced or inexperienced.”

The GAO said squadrons were able to complete mission-training requirements for ongoing contingency operations such as close air support to ground forces, but had limited ability to complete training for all core missions.

Based on interviews with wing and squadron commanders, the audit found that the four most common reasons for incomplete training were unavailability of aircraft because of maintenance, high deployment rates, extensive use of aircraft for large exercises and personnel shortages.

Seven squadron commanders told the GAO that in recent years maintenance units for U.S.-based squadrons have been “consistently manned below their authorized levels.” Lack of maintenance personnel has led to shortages of the aircraft needed to meet annual live-fly training requirements.

“Certain fighter squadrons have been deploying every eighteen months for a 6-month period each time,” the audit said. “When they return from deployment, squadrons have 12 months to rebuild proficiency across their full range of core missions before their next six-month deployment. Some squadron commanders told us that this high deployment rate typically reduces aircrews’ 12-month training schedule by at least 2 months, because they must focus on close air support training in preparation for the next deployment.”

Squadrons are also spending more time playing an “adversary air” role during large-force exercises, such as the multinational Red Flag drills. The squadrons pose as the “enemy” during training sorties.

Air Force officials told the GAO that the demand for adversary aircraft has increased because one of the two squadrons dedicated to adversary role-playing at Nellis Air Force Base was eliminated last year because of budget cuts.

“Specifically, with fewer aircrews assigned to a squadron, aircrews are required to take on a larger share of the administrative functions of the squadron, including scheduling training and weapons evaluation,” the audit said.

This problem is exacerbated in squadrons that operate using aircrews from reserve components.

“For example, the two F-22 squadrons in the 1st Fighter Wing are integrated with F-22 aircrews from the 192nd Fighter Wing of the Virginia Air National Guard,” the audit said. “As a result, there are fewer active-duty aircrews in the squadron. However, according to both F-22 squadron commanders, these aircrews are required to perform the administrative duties for the full squadron, because the Air National Guard aircrews are typically available only on the weekends, and their time with the squadron is used for training.”

Air Combat Command has taken some steps to increase the number of sorties aircrews are able to conduct, and it is attempting to relieve some of the demand for adversary air by contracting with a private company. Beginning in October, the Air Force intends to spend about $25 million to contract six A-4 fighters – a design first used in the 1950s – to provide two months of adversary air for exercises.

Some squadron commanders have dealt with the maintenance crunch by implementing “hot pits,” a practice where the aircrew flies a sortie, lands and refuels, and then immediately flies another sortie. That routine avoids some of the maintenance problems that arise from the complete shutdown of aircraft, the audit said.

The Air Force has announced initiatives to increase maintenance personnel but expects it will take several years to see the effects, the audit said.

But on a more basic level, the GAO audit questioned the assumptions used by the Air Force in setting training requirements to meet certain objectives.

The audit concluded that the Air Force lacked a systematic evaluation of the effectiveness of training for combat squadrons against expectations.

“Specifically, Air Combat Command has not established the desired learning objectives or training support elements needed to accomplish training expectations and does not collect data to assess effectiveness,” the audit said.