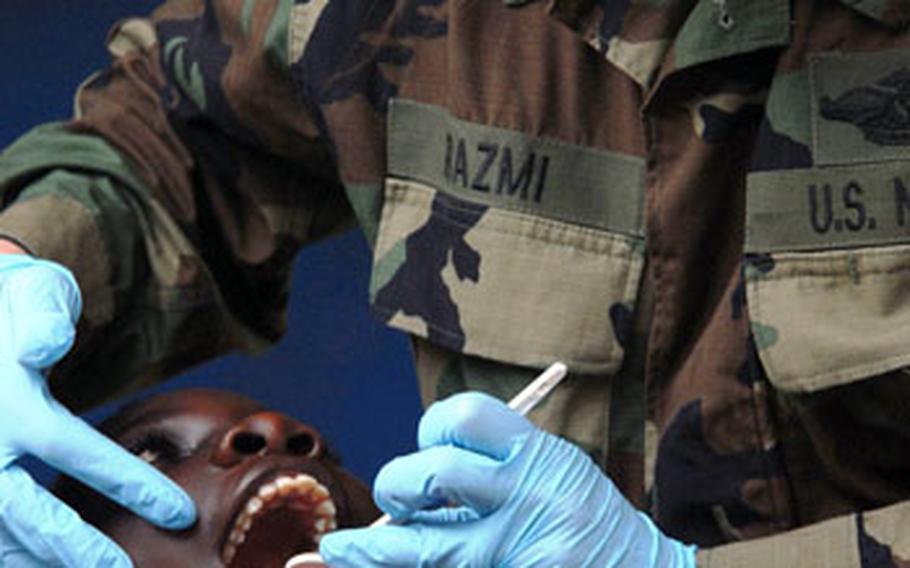 Lt. Cmdr. Shay Razmi, a dental officer, examines the teeth of students from the Twin-City Special School for the Mentally Handicapped on March 5 during the USS Nashville’s 18-day port visit to Sekondi, Ghana, in support of Africa Partnership Station. (Matthew Bookwalter/Courtesy of U.S. Navy)

U.S. Africa Command needs to do a better job of conveying its mission and focus, if it is to overcome lingering concerns that the Defense Department is trying to militarize U.S. foreign policy in Africa, according to a government report issued last week.

Combating those misperceptions about its role on the African continent is one of three hurdles to the ultimate success of the Pentagon&#8217;s newest combatant command, according to a Government Accountability Office report.

The GAO found problems with AFRICOM&#8217;s efforts to integrate its headquarters staff with personnel from other agencies, such as the State and Treasury departments.

Initially, AFRICOM targeted 125 people to join its ranks &#8212; about 25 percent of its command staff &#8212; but later reduced that goal as other agencies could not provide that level of staff support. Its goal for fiscal 2009 is 52 interagency positions, which is about 4 percent of its staff. As of October, it had 13 staff members from outside the DOD, the report states.

Investigators also addressed cost issues, advising the Pentagon to limit expenditures on temporary AFRICOM infrastructure until decisions are made on the long-term locations for the command. Renovations to the interim headquarters in Stuttgart, Germany, are estimated to cost about $140 million by the time they are completed.

A decision on where to locate the command&#8217;s permanent headquarters has been delayed into fiscal 2012.

In the meantime, AFRICOM needs to continue to build credibility, according to the GAO report. While the military&#8217;s large size brings the promise of increased resources in efforts to create stability in Africa, that capacity has created worries among the command&#8217;s U.S. partners and African nations, the report found, about "the potential encroachment into civilian responsibilities like development and diplomacy."

Some African countries fear, for example, that AFRICOM will be "used as an opportunity to increase the number of U.S. troops and military bases in Africa," according to the report.

Some nongovernmental organizations, meanwhile, have shared their perceptions that AFRICOM would further "militarize U.S. foreign aid and lead to greater U.S. military involvement in humanitarian assistance."

This has led to fears that nongovernmental aid workers may be at risk in Africa if their activities are confused or associated with the U.S. military, the GAO report states.

AFRICOM spokesman Vincent Crawley said the need to counter misperceptions about the AFRICOM mission comes as no surprise.

Crawley said AFRICOM is pleased with the number of interagency representatives on its command staff so far.

The initial staffing numbers discussed more than two years ago have since been revised due to changing needs and the staffing challenges of other government agencies, he said.