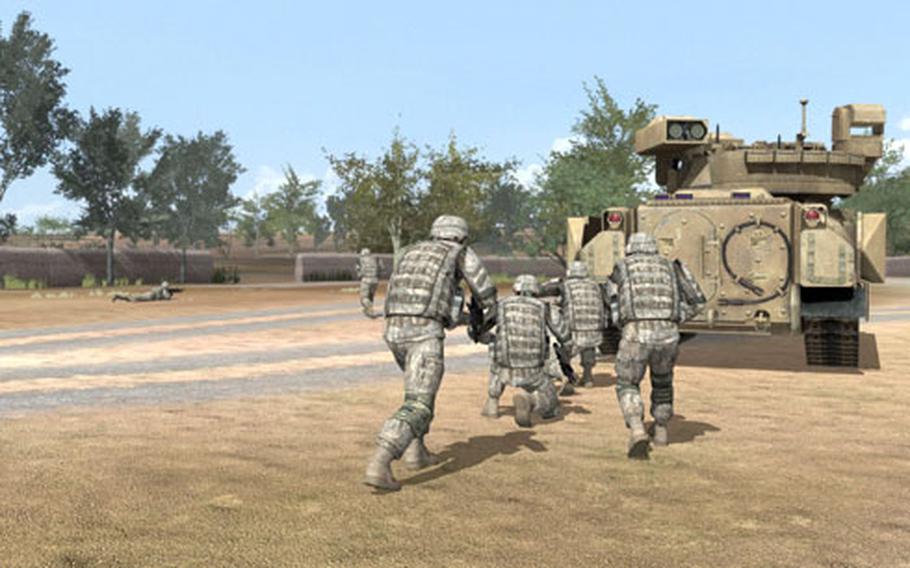 Buy Photo
Troops head for cover as they return fire in a screen shot from the training simulation "Virtual Battle Space 2" used at the Joint Multinational Simulation Center in Grafenwohr. (Seth Robson/Stars and Stripes)

Tom Lasch, JMSC&rsquo;s director of models and simulations, said the organization, which opened a simulation building packed with hundreds of computer screens at Grafenw&ouml;hr on Friday, is looking for a civilian "first-person simulation specialist."

The simulations, which include "America&rsquo;s Army," "Darwars Ambush" and "Virtual Battle Space 2 (VBS2)," need regular testing because the manufacturers constantly add patches and extra features that could make the software malfunction, Lasch said.

"We use VBS2 for first-person shooter-type simulations to teach basic combat skills &mdash; individual as well as collective," Lasch said.

"It is at the lowest beginner level where soldiers learn the importance of cross talk within a vehicle or vehicle-to-vehicle as the convoy commander," he said.

On Friday, Capt. Phil Hensel was using the gaming technology to march virtual soldiers around an Iraqi town.

In one simulation, a computer screen showed terrorists manufacturing a car bomb and using it to blow up a police station. The screen showed how U.S. forces could trace the origin of the bomb using satellite imagery, conduct interviews with Iraqis to find out where the terrorists were hiding, and conduct a raid on the enemy hideout.

Hensel, a first-person shooter simulation officer, said he wasn&rsquo;t a big computer gamer before he came to JMSC but he didn&rsquo;t have a problem adjusting to the gaming technology.

"We have a lot of convoy trainers," he said. "A lot of them are support units but we also have people train on raids for time-sensitive targets."

The JMSC staff can add multiple events to the simulation training &mdash; things like enemy ambushes, roadside bomb attacks or vehicle breakdowns. "We just need clear guidance from the unit and we can set up a lot of different things for them," he said.

The simulations, which include accurate maps of large parts of Baghdad and several Iraqi towns, do a good job replicating Iraq, said Hensel, who served there 2004-05 and again in 2006-07.

"I was in Baghdad and I can pick out places that I have been from the simulation," he said.

The veteran of an Iraq deployment from 2005 to 2007 said the flexibility of the gaming technology is helpful since every unit does things differently.

Lasch said "Generation Y" soldiers &mdash; those born since the late 1970s &mdash; grew up with computers and computer games and they enjoy using the gaming technology.

"It is very intuitive for these young soldiers to use," he said. "That is part of the beauty of it."