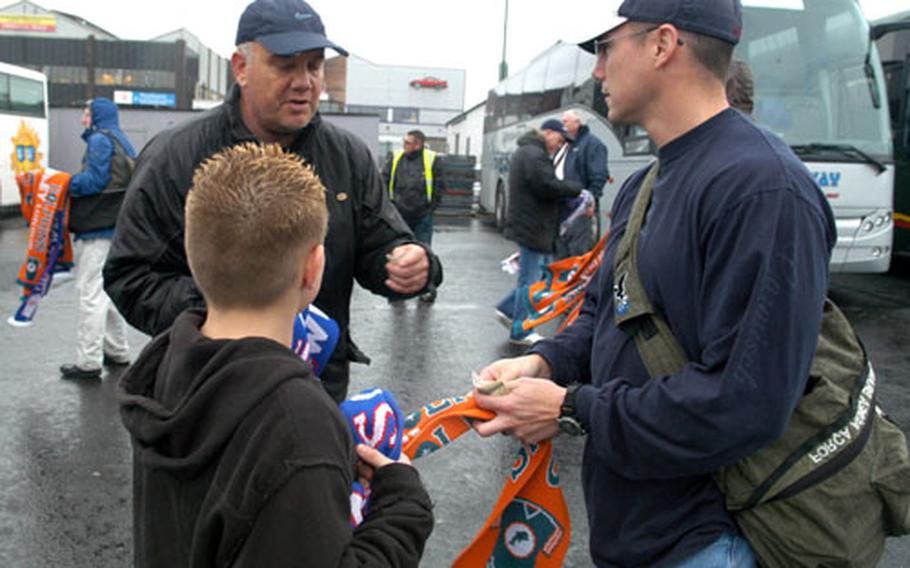 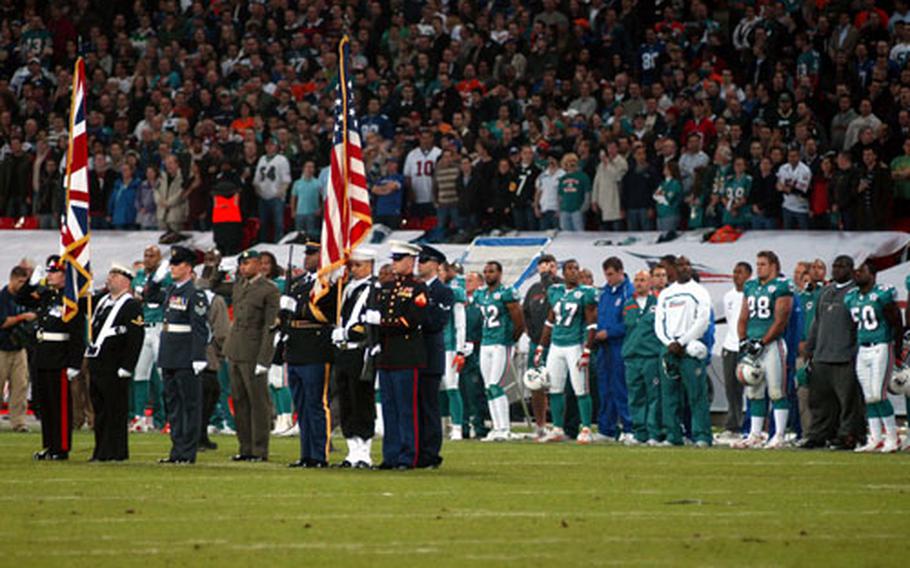 A joint color guard performs duties in honor of the British and American colors before the start of the New York Giants and Miami Dolphins game. The U.S. color guard is based out of RAF Molesworth. (Sean Kimmons / S&S) 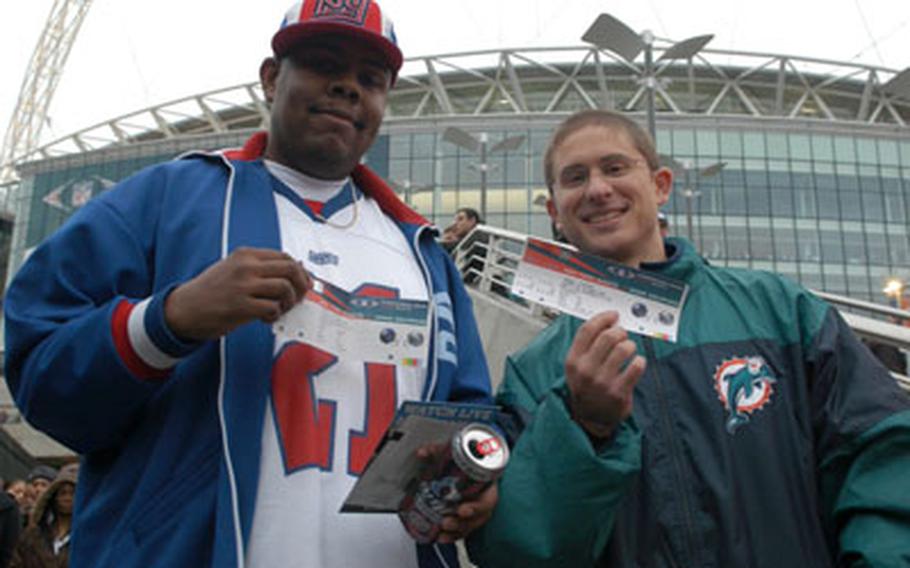 Air Force Staff Sgts. Terrell Stevens, left, and Ricardo Cisneros, both from the 100th Operations Support Squadron at RAF Mildenhall, hold up their newly acquired game tickets. Both traveled to the game without tickets, but then were given free tickets by a few generous fans right before the kickoff. (Sean Kimmons / S&S) 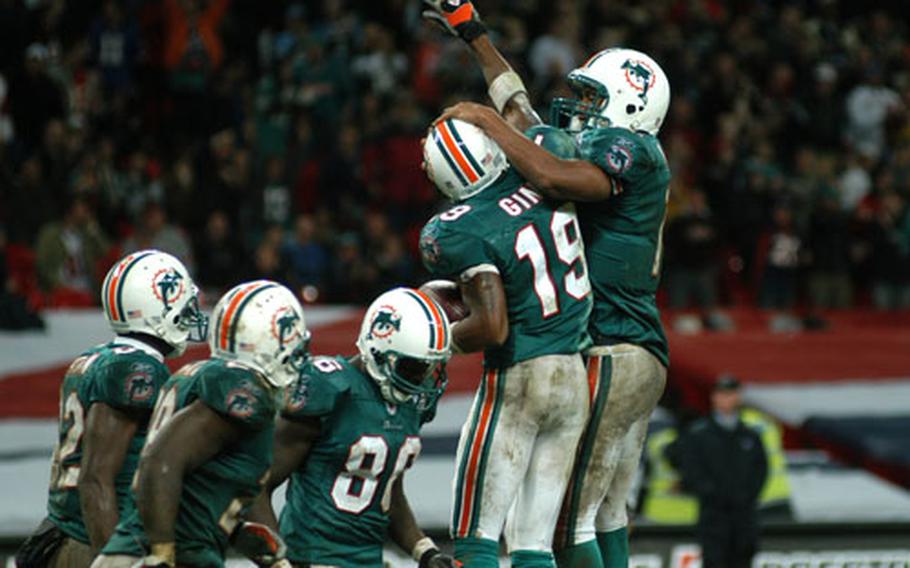 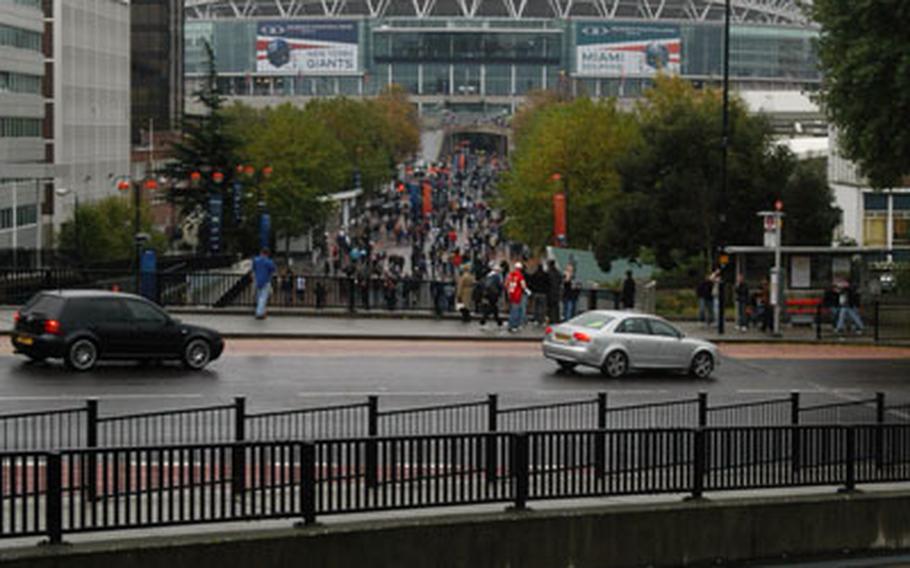 The two RAF Mildenhall airmen were braving a steady rain Sunday as they stood in line for the NFL game viewing party at the Wembley Arena when, in a matter of minutes, two random fans gave the two airmen tickets to the historic, sold-out game.

Cisneros, 29, of Miami, and Stevens, 29, of Washington, D.C., were among a contingent of about 100 airmen and their families who traveled in a pair of chartered buses from RAF Lakenheath to Wembley Stadium for Sunday&#8217;s game between the Miami Dolphins and the New York Giants.

While their comrades filtered into the arena for a viewing party, Cisneros and Stevens marched proudly into the stadium, where nearly 81,176 fans jammed into the sleek, contemporary stadium for the first regular season NFL game played outside North America.

Cisneros arrived at Wembley decked out head to toe in Dolphins gear and, like so many die-hard fans on Sundays across America, said he expects his team to prevail despite the Dolphins&#8217; winless record heading into the tilt with the Giants.

Fellow RAF Mildenhall officer Maj. Anthony Caparella, 34, of Phoenix, brought his 10-year- old son, Jake, to the viewing party at Wembley Arena, which offered a low-cost alternative to the stadium tickets with big- screen televisions as well as games and festivities targeted for families.

Many of the American military members on hand said it was a surprise to find the NFL invading the land of the British Premier Football League, arguably the world&#8217;s dominant sporting league with fans from Tokyo to Tegucigalpa, Honduras, sporting Manchester United jerseys.

Stevens said he expected to see the Giants in London.

The airmen on hand joined thousands of Americans from across Britain who converged on Britain&#8217;s signature stadium for a game that brought Super Bowl-style hype to the land of fish and chips.

British pop band The Feeling played two of its Radio One hits alongside gyrating Miami Dolphin cheerleaders in a pyrotechnic-laden pregame extravaganza. Scores of fans from South Florida and the Big Apple arrived clad in their team&#8217;s jerseys, but they were vastly outnumbered by fans geared up in the jersey of a variety of other NFL teams.

The game was less about cheering for a particular team as it was about being witness to the first trans-Atlantic export of America&#8217;s national obsession.

Sheets of rain and chilly temperatures that led to a largely sloppy game with little scoring did nothing to dampen fans&#8217; spirits. The Giants overcame the weather, the jet lag and the Dolphins to notch a 13-10 victory.

A flyover with Royal Air Force Typhoons as well as a U.S. Air Force KC-135 Stratotanker and two F-15C fighter jets was canceled due to low cloud cover.

But the RAF Molesworth color guard was not hampered by the weather. They joined a contingent of British troops for a pregame rendition of &#8220;The Star-Spangled Banner&#8221; followed by &#8220;God Save the Queen.&#8221;

British army bombardier Mark Pantony, 27, of Lincoln, was one of the few troops involved in the multinational color guard who had experience in high-profile appearances.

The NFL is hoping British fans thought the same of the game.