Gambling on teamwork with local Iraqis 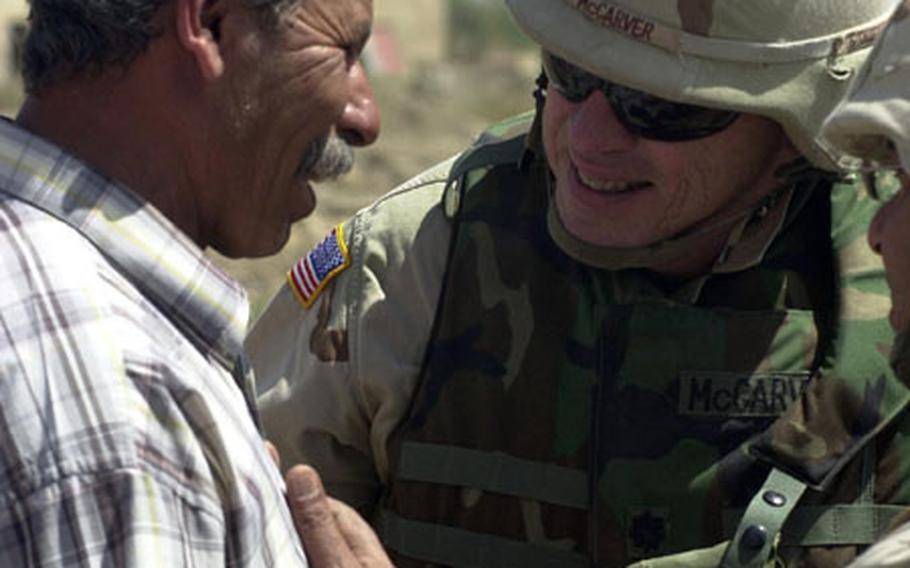 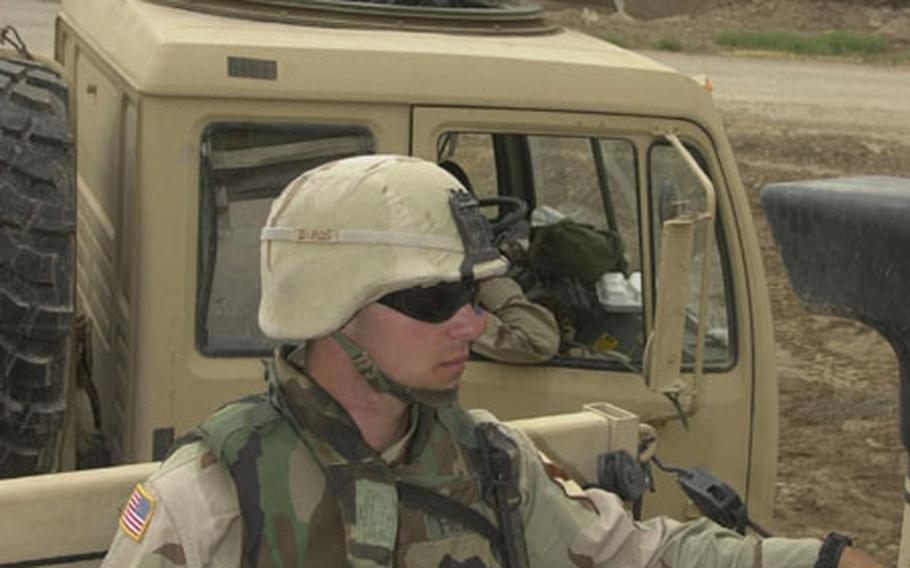 Capt. Matthew Hintz surveys work just outside the Camp Blackjack section of Camp Victory North. Hintz and other support personnel volunteer to go outside the wire and work with squatters to clear up the area. The work is crucial, Hintz said, because if Iraqis see blighted neighborhoods around a division headquarters, they&#39;ll doubt the U.S. resolve about rebuilding Iraq. (Terry Boyd / S&S) 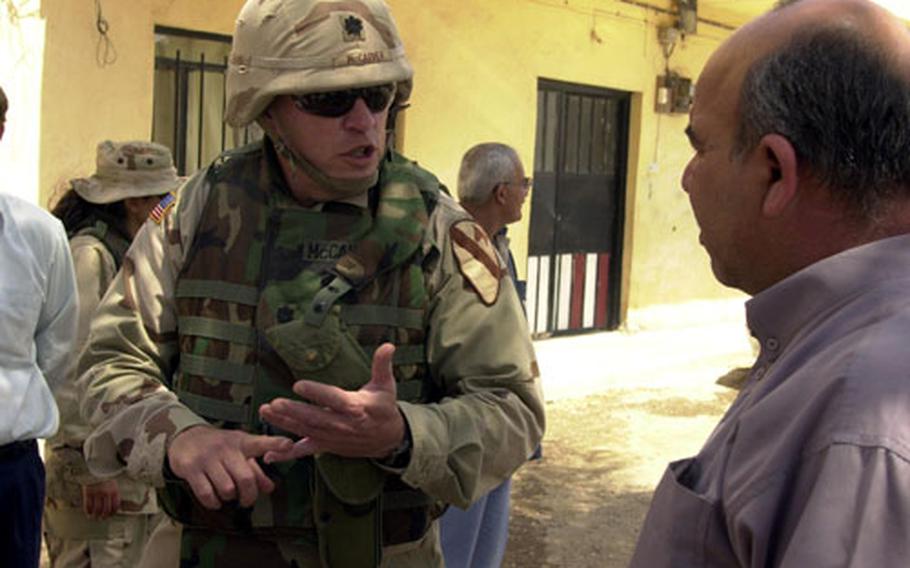 Lt. Col. Ray McCarver Jr., 15th Forward Support Battalion commander, ticks off projects either under way or planned at a veterinary college just outside the gates of Camp Blackjack. McCarver is gambling that he can win local squatters&#39; support and keep them from selling out to anti-American elements. "We&#39;re their only freakin&#39; chance," he said. (Terry Boyd / S&S) 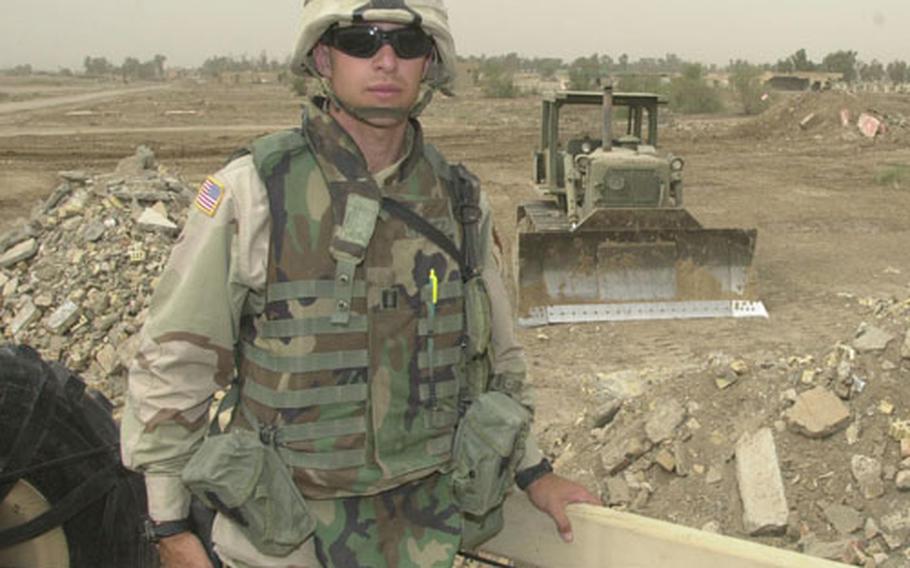 Capt. Matthew Hintz surveys work just outside the Camp Blackjack section of Camp Victory North. Hintz and other support personnel volunteer to go outside the wire and work with squatters to clear up the area. The work is crucial, Hintz said, because if Iraqis see blighted neighborhoods around a division headquarters, they&#39;ll doubt the U.S. resolve about rebuilding Iraq. (Terry Boyd / S&S)

McCarver, commander of the 1st Cavalry Division&#8217;s 15th Forward Support Battalion, nicknamed &#8220;The Gamblers,&#8221; is betting all Iraqis aren&#8217;t secret insurgents biding their time until they can turn on the Americans.

He and his soldiers are gambling that they can win over the people living just outside this sprawling new base, &#8220;to make sure they have a vested interest in our not being attacked,&#8221; he said.

The stakes are high, and other units have tried to do the same, only to watch Baghdad neighborhoods go bad over night.

But McCarver must control the area abutting Camp Victory North to the east to deny sanctuary from which to attack this division headquarters on the edge of Baghdad&#8217;s international airport.

The expedient move, McCarver said, might have been to evict the 1,500 or so Iraqis living in his Victory North sector, headquarters for the 1st Cav&#8217;s 2nd Brigade Combat team.

But the right thing &#8212; for the moment &#8212; is to work with the varied pockets of people spread over an approximately 10-square-mile area in hopes that both Americans and locals can benefit in a symbiotic relationship.

Evicting the people &#8212; all squatters &#8212; has its own risks, said Capt. Matthew Hintz, a civil affairs officer for the FSB.

This way, dispossessed people get security while 1st Cav gets a built-in early warning system.

Still, there is altruism at work. Why, McCarver asked, can&#8217;t this area, which soldiers have dubbed &#8220;Compton&#8221; after the troubled Los Angeles suburb of the same name, be the first brick in the foundation of a new society?

Locals told him that before February, U.S. patrols rarely entered these neighborhoods, and if they did they didn&#8217;t return for follow-ups, McCarver said.

The Gamblers got a chilly reception when they began canvassing the area. Residents wouldn&#8217;t even come out and talk.

Hintz, 27, from Wisconsin, volunteered to approach local men without his weapon, McCarver said. It fell to 1st Lt. Amy Cronin, assistant operations officer, to talk to the women, he said.

Day by day, Hintz, Cronin and others won trust by proving the Gamblers were comfortable going into homes, talking, then following up on concerns.

They&#8217;ve identified five zones, all with different characteristics, ethnicities and income levels &#8212; an eclectic mix of people including Sunni professors at the veterinarian college, the damaged middle-class neighborhood, and clusters of displaced Shiites and at least three Gypsy enclaves living in bombed-out buildings on the former Republic Guard air base.

The Gamblers began identifying leaders, most particularly a 30-year Republic Guard veteran named Adnan. McCarver said Adnan always was ready to help, but never asked for anything in return. In fact, the 50-something soldier didn&#8217;t particularly want to become the de facto muktar, or mayor, the commander said, adding, &#8220;Sometimes a guy doesn&#8217;t want to be a leader, but sometimes it&#8217;s thrust upon him.&#8221;

As Gamblers and locals have gotten to know one another, Hintz and his crews of FSB volunteers have spent hundreds of hours doing everything from picking up garbage to demolishing buildings to writing up proposals for new windows in the elementary school.

At the same time, the Gamblers push entrepreneurship and community pride, Hintz said. He allows local men to tear down vacant buildings that could be used for attacks, then turn a buck selling the steel rebar and other recyclables. The ultimate goal &#8220;is that we fill them up with ideas,&#8221; Hintz said, such as picking up garbage and reporting infiltrators as matters of routine.

So far the gamble is producing tangible payoffs. Camp tower guards have yet to fire a round, Hintz said.

Do the Gamblers understand the Iraqis? Not entirely. What they began to understand was that the squatters had no friends, Hintz and McCarver said.

Hintz got a blunt lesson in reality when he tried to get the area represented on the neighborhood council in nearby Ameriyah. Council members relayed to Hintz via another U.S. officer that the best course &#8220;would be to shoot two or three of them, and they&#8217;ll all leave,&#8221; he said.

The land could become a different sort of battleground in the future because of its proximity to Baghdad International Airport. Land speculators already are trying to buy up nearby parcels.

In a way, McCarver, Hintz and company don&#8217;t even like to talk much about their run of luck, much like a gambler on a streak.

For one, forward support battalions don&#8217;t do force protection. The Gamblers&#8217; main job is providing logistics for the 1st Cavalry Division&#8217;s 2nd Brigade Combat Team, overseeing support functions such as the mayor&#8217;s cell, mechanical repairs and medical care. McCarver said the Gamblers decided to take on force protection to free up as many war fighters as possible for combat.

Gamblers who run bulldozers and trucks, demolish buildings, fill in old Iraqi fighting positions and work on community projects are volunteering during their off time, said Capt. Matthew Hintz.

He also refers frequently to Malcolm Gladwell&#8217;s book &#8220;Tipping Point,&#8221; which looks at how small changes can unleash larger trends. How, for example, crime plummeted under former New York Mayor Rudolph Giuliani after Giuliani made what seemed like cosmetic changes.

The Gamblers use this approach while coming up with their own methods.

&#8226; They&#8217;ve started work programs, hiring local men at $5 per day. For just a few thousand dollars, they&#8217;ve opened up hundreds of acres for better line of sight from base gun towers while removing garbage and bombed-out buildings on a former Republican Guard air base.

&#8226; To solve one of the main security issues &#8212; multi-story dorms on the veterinary college campus that actually overlook Victory North walls &#8212; Gamblers started patrolling with the school guards, and now are atop the dorms each night. U.S. soldiers also patrol the neighborhoods with locals.

While the approach works for the Gamblers, McCarver says he&#8217;s not sure it can be a template for other divisions. Situations in Iraq vary from block to block, he says. &#8220;Everywhere is different,&#8221; he says.