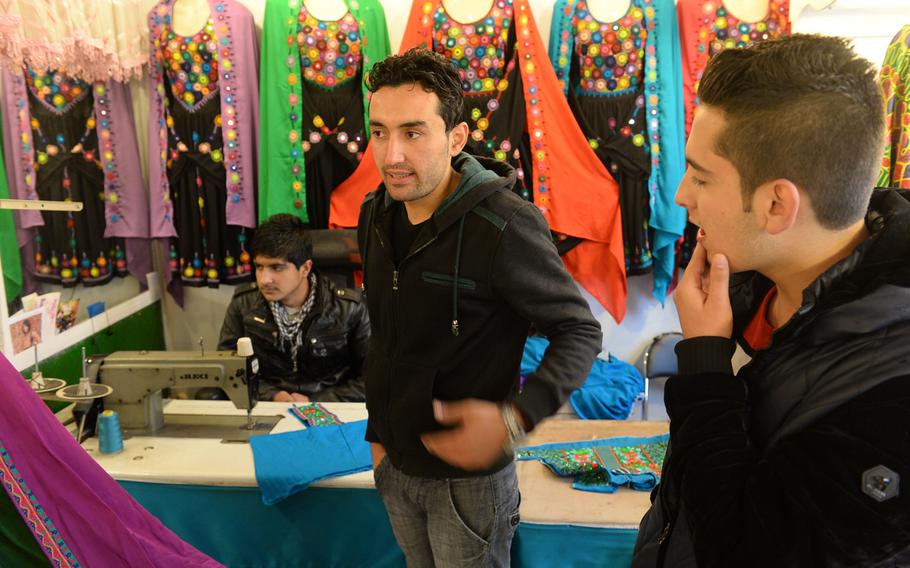 Khaled Qadis, center, discusses the drop in business at his family's dress shop in Kabul, Afghanistan. Last year saw a 50 percent drop in business over 2013, he said. (Josh Smith/Stars and Stripes)

Khaled Qadis, center, discusses the drop in business at his family's dress shop in Kabul, Afghanistan. Last year saw a 50 percent drop in business over 2013, he said. (Josh Smith/Stars and Stripes) 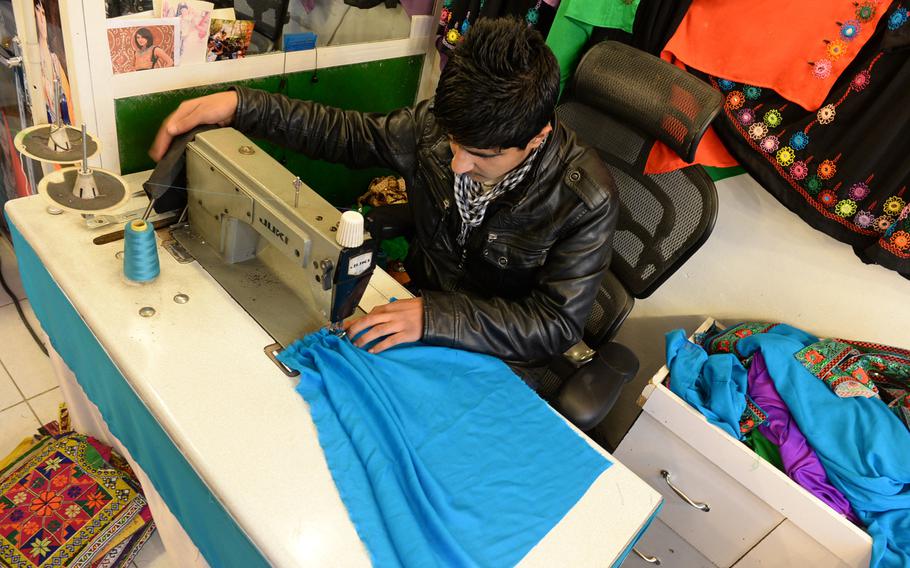 Rahim Amiri operates a sewing machine in his family's dress shop in Kabu, Afghanistan. The shop is one of many in Afghanistan that have seen business drop off as political controversy and ongoing violence lead to uncertainty. (Josh Smith/Stars and Stripes)

KABUL, Afghanistan — The Qadis family dress-making business boomed in the heady days after the Taliban were ousted. But 12 years on, the family is among a vast majority of Afghans who say economic prospects are bleak.

Economic sentiment in Afghanistan has been sharply declining since 2011, when 33 percent thought conditions were getting better; the figure for 2013 was 10 percent.

“In the past, business was really good,” Rahim Qadis said over the whir of a sewing machine as he stood between rows of brightly colored dresses. “But in 2014, our sales were down 50 percent compared to the year before.”

Customers are reluctant to spend because of uncertainty over the country’s future stability, Qadis said.

“The lack of security is the only problem,” he said. “People don’t know what will happen. And so they don’t buy.”

As the NATO coalition force has shrunk and moved to a mission more focused on training and advising than combat operations, Qadis is just one of many Afghans who have a dark outlook on their economic future. And security is not the only worrying factor: Nearly four months’ into his tenure, President Ashraf Ghani is still struggling to build a Cabinet. The situation raises concerns about political stability and his pledges to fight rampant corruption.

“This climate of uncertainty has fostered a crisis of hope that may prove as big an enemy to sustainable development and growth as any security threat,” wrote Gallup’s Julie Ray, who laid out the findings in a report on Gallup’s website.

The Gallup survey, conducted in August and September, was based on in-person interviews with 1,000 adults over the age of 15. It had a margin of error of plus or minus 3.6 percent.

Economic progress is often trumpeted by international aid organizations and coalition governments as evidence of the success of foreign military and economic intervention. Gross domestic product has risen “dramatically” to more than $20 billion, or more than five times what it was in 2002, according to the U.S. Agency for International Development.

But with the pullout of most international troops — together with the rise in insurgency violence and the reduction of international aid efforts — economic growth has leveled off.

Afghanistan averaged real GDP growth of about 9 percent each year from 2003 to 2012, according to the World Bank. But in 2013 that growth tumbled sharply to 3.7 percent and dropped even further to a projected 1.5 percent in 2014, Gallup noted. Per capita GDP remains 215th in the world, out of 228 countries, according to the CIA’s World Factbook.

The slowing growth has a real impact on the lives of Afghans, as many as 35 percent of whom are unemployed. The respondents in Gallup’s latest poll see the outlook for jobs as the worst it’s been since 2008, with 69 percent saying now is a bad time to find a job and just under 20 percent saying it’s a good time.

“We are passing through a sensitive time, and obviously the political instability has adversely affected the economic side as well,” said Kamal Safai, who sits on a budget and finance commission in Afghanistan’s parliament.

A major part of the economic crunch is due to Afghanistan’s continued dependence on foreign aid and investment.

“The uncertainty surrounding the security transition and the elections stalemate in 2014 have certainly drained Afghans’ positivity about their economy,” Ray wrote on the Gallup website. “But even more problematic for a country whose economic growth has been largely reliant on international aid and spending, the situation has also spooked investors.

Safai said he hopes some of that investment will return under the administration of Ghani, a former finance minister and World Bank official, who has pledged to improve relations with international donors. That was a hope echoed by Gallup researchers, but the survey’s results paint a bleak picture for Afghans as international attention shifts elsewhere.

“With the U.S. and NATO combat mission ending only a few weeks ago, Afghans clearly have more questions than answers about what the future holds,” a report on the Gallup poll concluded. “Afghans are now the most discouraged they have been since 2008 about the economy and jobs; more are suffering; and the plurality think they will be worse off after the troops leave and that the Taliban will resurge.”