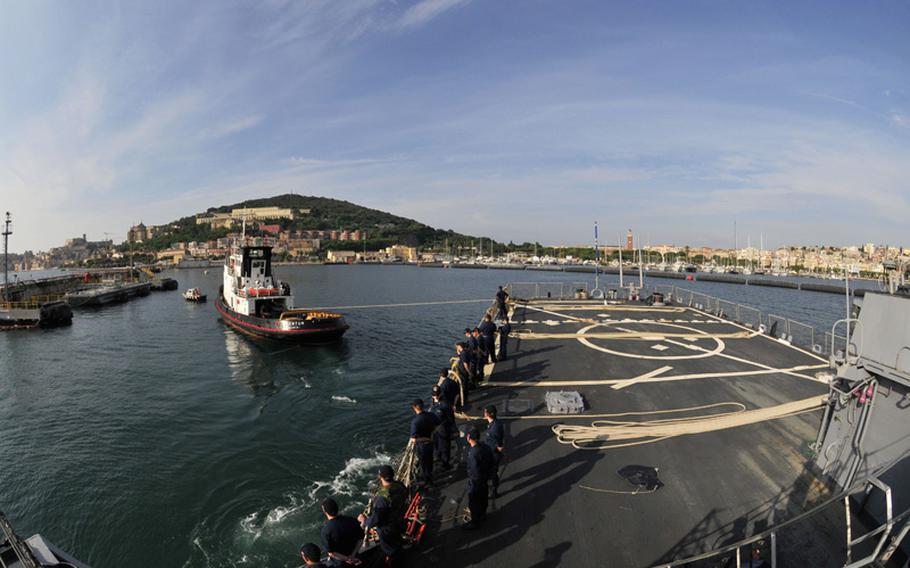 NAPLES, Italy &mdash; The water supply in Gaeta, home to the flagship for the U.S. Navy&rsquo;s 6th Fleet, has been declared nonpotable, requiring residents and workers there to use bottled water for drinking, food preparation and brushing teeth.

The announcement this week by Naval Support Activity Naples represents the latest water trouble for U.S. military community members in southern Italy. Earlier this year, drinking water near Naval Air Station Sigonella was also declared dangerous. Since 2008, the Navy has cautioned Naples personnel living off base to drink, cook and brush their teeth with bottled water.

In Gaeta, town officials declared all tap water nonpotable because of recent heavy rain that has resulted in a significant amount of dissolved rocks and minerals in the water supply that might allow for the growth of disease-causing organisms, said NSA Naples spokesman Timothy Hawkins.

Local Italian health officials are working to disinfect the water supply with chlorine. But it&rsquo;s unlikely the water will be deemed safe before April, when the rainy season generally ends, Hawkins said.

The particles make the water appear cloudy. Anyone who has come into contact with the water and is experiencing symptoms of nausea, cramps, diarrhea and headaches should see a health care provider. There have been no reported illnesses linked to the water quality, Hawkins said.

Until the water supply is declared safe, Gaeta visitors and residents have been asked to use bottled water for any needs, including making ice and feeding pets.

Gaeta is the home port of the USS Mount Whitney, the 6th Fleet&rsquo;s flagship, and is about a 90-minute drive north of the fleet&rsquo;s Naples headquarters.