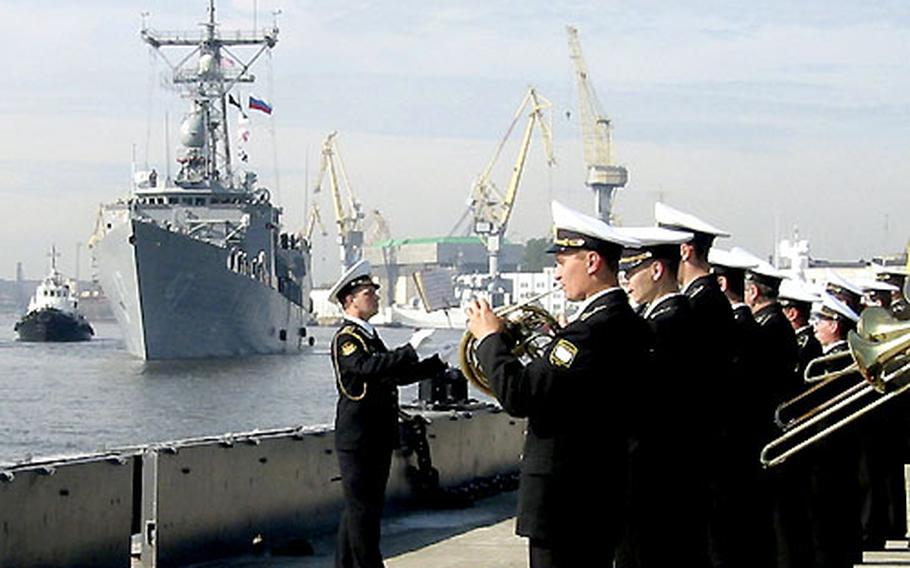 Destroyer Squadron 60’s USS Nicholas prepares to moor in St. Petersburg, Russia, as the Russian Naval Band plays on the pier. The frigate was in Russia for a ceremony celebrating John Paul Jones during the city’s 300th anniversary. Jones volunteered and served as a rear admiral for the Russian navy after the Revolutionary War. Nicholas is one of two ships currently assigned to the Gaeta, Italy-based destroyer squadron. (Leonardo Day / Courtesy of U.S. Navy)

Starting a war with three people may make things tough, but once the staff of the Gaeta, Italy-based Destroyer Squadron 60 grew to eight-strong, the entire Mediterranean Sea was in their hands.

The eight-person unit was set up in February to command some of the U.S. 6th Fleet&#8217;s destroyers and frigates, but had only three people assigned at the start of Operation Iraqi Freedom.

&#8220;They really hit the deck running without their full compliment,&#8221; said Capt. Dale Little, 6th Fleet&#8217;s operations officer. &#8220;Once they stood up and were operational, they played a significant role in planning maritime interdiction operations and leadership interdiction&#8221; of Iraqi leaders attempting to flee through the Mediterranean.

During maritime interdiction operations, Navy crews sometimes board and search civilian vessels suspected of supporting terrorists and question the ships&#8217; crews. The destroyer squadron has taken a lead role in the interdictions.

These overseas-based staffs provide continuity to the fleet commander.

One of the squadron&#8217;s original jobs, protecting military vessels traveling through the Strait of Gibraltar, has since been turned over to NATO warships, allowing U.S. warships to assume a wider variety of missions.

Even with the shifting of roles, DESRON 60 units escorted more than 65 combatants and 355 allied merchant vessels. They still provide operational control over the escorts in the Strait.

The squadron currently has two ships assigned; one taking part in a Baltic Sea exercise and the other making high-level diplomatic port visits, known as engagements, in the Black Sea.

The schedule has kept the staff so busy that it didn&#8217;t have time for a formal startup ceremony. They settled on a simple cake-cutting on the mess decks of the La Salle a few weeks ago.

The squadron is up to six people and will soon have its allotted eight. The staff now ranges from Capt. Tim Taylor, who in Navy terms is the squadron&#8217;s commodore, to the junior member, an enlisted surface warfare specialist-qualified first class petty officer.