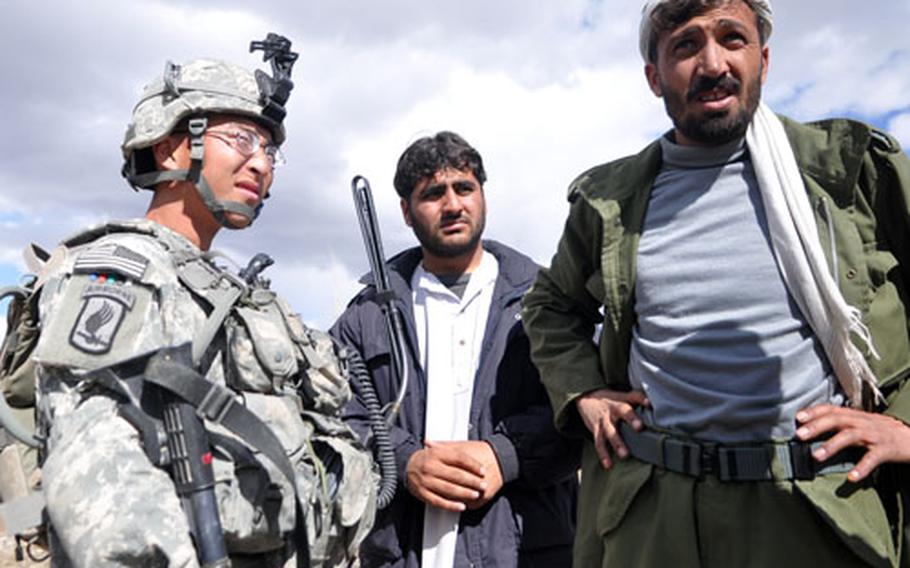 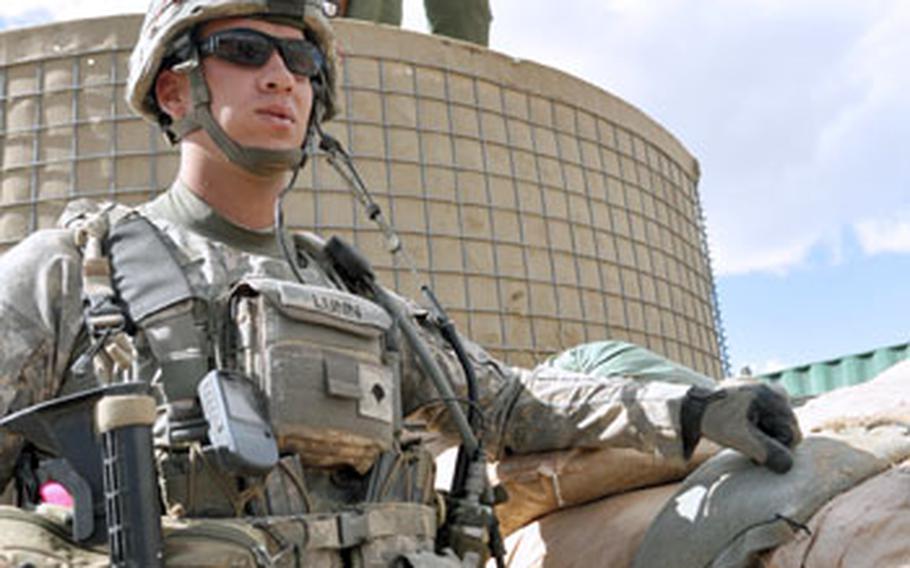 A member of the Afghan Provincial Protection Force stands on a Hesco barrier behind U.S. Army Spc. Nick Lunnat a checkpoint in Wardak province, in eastern Afghanistan. The program, which arms local militias, has been hailed by locals and U.S. military commanders alike. (Heath Druzin / S&S) 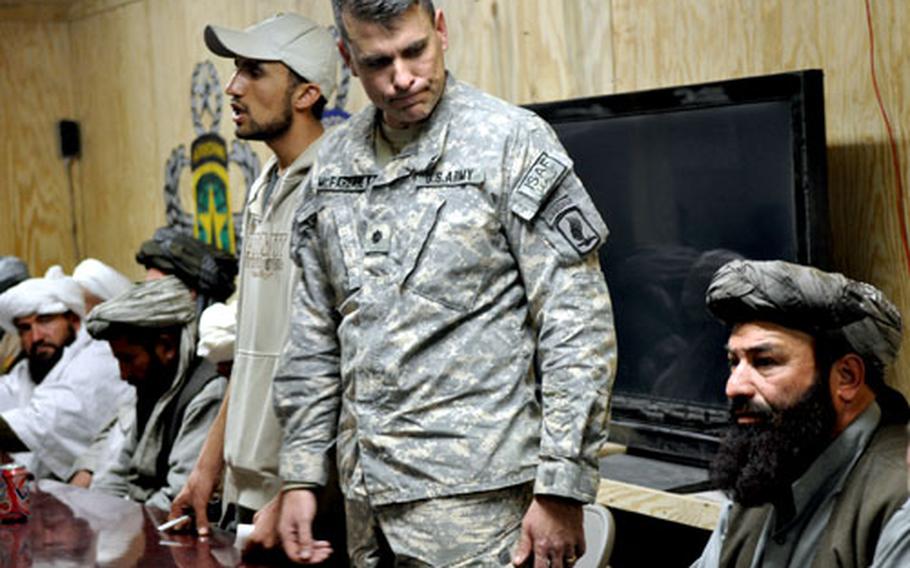 NERKH DISTRICT, Afghanistan &#8212; From village shopkeepers to district elders to U.S. Army company commanders, nearly everyone agrees: The shabbily dressed, occasionally uniformed men with Kalashnikovs manning checkpoints throughout Wardak province&#8217;s populated mountain valleys aren&#8217;t just part of the solution to improved security in this perilous corner of Afghanistan &#8212; they are the key to stability.

But despite the praise lavished on the year-old Afghan Provincial Protection Force program, which arms local militias and encourages them to defend their villages, the future of the effort is in limbo.

Known by their old acronym, &#8220;AP3,&#8221; the militias are made up of local villagers who are given automatic weapons and some training and are paid to protect their communities. With roughly 1,200 members, the militias make up a significant fighting force in a province with a little over 500,000 residents.

Compared with the often thieving, inept Afghan National Police, and the Afghan National Army, whose soldiers are rarely from the areas where they are stationed, the local militias seem to have drawn much more trust from regular Afghans.

Started by U.S. Special Forces, the militias are somewhat reminiscent of the &#8220;Sons of Iraq,&#8221; a program that paid 100,000 mostly Sunni men, many former militants, to take up arms against the insurgency. &#8220;Sons of Iraq&#8221; is widely credited, in concert with a surge of U.S. troops, with bringing about a precipitous drop in violence across Iraq.

In Wardak, like many far-flung, rugged regions of Afghanistan where villages just a few miles apart and separated by jagged mountains may as well be different countries, an aversion to outside control runs deep. The Taliban, the central government, NATO forces &#8212; all are treated with mistrust by villagers used to taking care of themselves and being left alone.

The governor of Wardak province, Muhammad Fidai, lists expanding the militias as the No. 1 security priority for a province riven by violence and lawlessness. Fidai sees the militias as a good way to bring former Taliban fighters to the government&#8217;s side and keep security forces honest in a country where police are seen as bandits as much as protectors.

They also have proven to be a good source of local intelligence.

There have been problems with the program, including commanders skimming money from their fighters&#8217; pay, a common practice across the security forces in corruption-imbued Afghanistan, and a dangerous propensity for showing up to work out of uniform, which U.S. commanders fear could lead to friendly-fire incidents. Overall, though, they have received high marks from both Afghans and coalition members.

The idea of expanding the program was discussed in a November briefing with Gen. Stanley McChrystal, the top coalition commander in Afghanistan, but he asked for another six to nine months to study the program before making a decision, said coalition spokesman Lt. Col. Todd Breasseale.

Leading the Afghan Provincial Protection Force is a colorful figure emblematic of the shifting alliances and murky connections that define the ever-evolving battlefield coalition commanders face in Afghanistan.

Ghulam Muhammad, an imposing figure with a thick beard dyed a deep red and dark, penetrating eyes, made his name as a fierce mujahedeen commander during Russia&#8217;s disastrous war in Afghanistan. He then fought with the Taliban and was detained by American forces before not only switching allegiances, but agreeing to head the militia program.

At Forward Operating Base Airborne during a meeting of roughly 60 Wardak elders, many of whom fired accusations at their American hosts, it was clear who was in charge. Nearly every elder who got up to speak said they were there only at the request of Muhammad. When McFarlane tried to calm an irate elder from the volatile Tangi Valley, the elderly Afghan thrust a bony finger at him.

In some ways, though, the very success of the program, taking place in a province just next door to Kabul, the capital, spotlights the inherent weakness of the central government and the heavy odds against President Hamid Karzai extending his reach to much of rural Afghanistan.

Its very implementation implies that any nationwide force &#8212; police, army, or otherwise &#8212; will have limited powers in a diverse country that never has had much of a national identity.