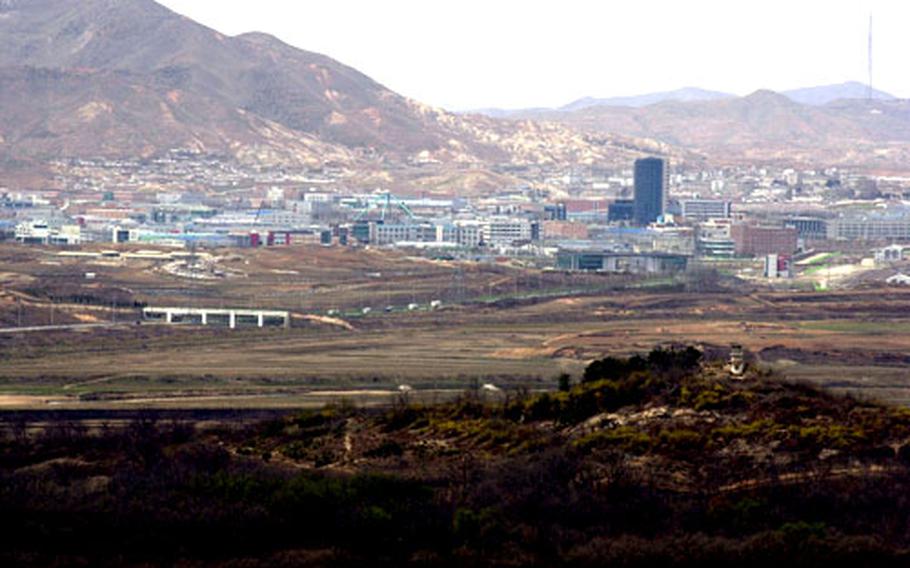 Buy Photo
A caravan of vehicles from South Korea passes under a bridge en route to the Kaesong Industrial Complex in North Korea in April 2010. About 1,000 South Koreans work in the complex, which supports about 120 companies and more than 43,000 workers. (Jon Rabiroff/Stars and Stripes)

Buy Photo
A caravan of vehicles from South Korea passes under a bridge en route to the Kaesong Industrial Complex in North Korea in April 2010. About 1,000 South Koreans work in the complex, which supports about 120 companies and more than 43,000 workers. (Jon Rabiroff/Stars and Stripes) 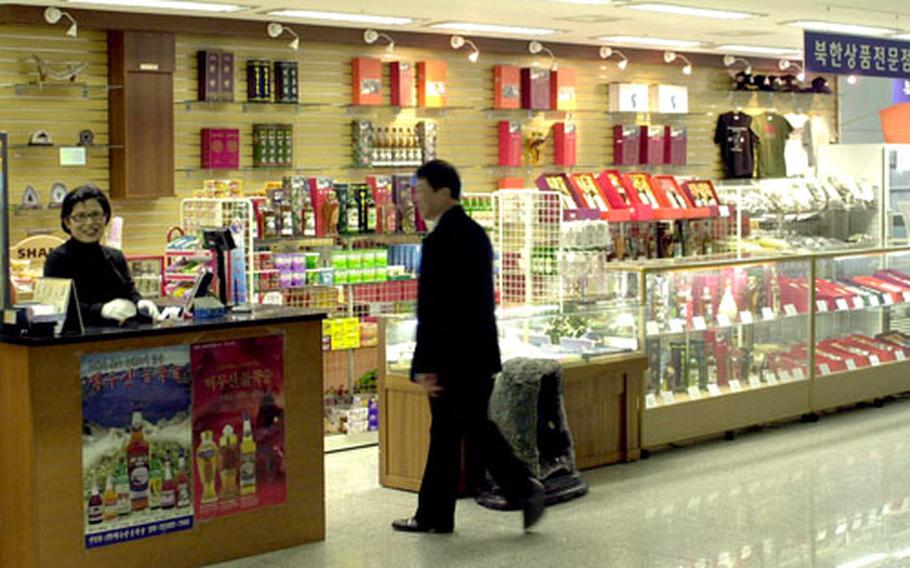 Some of the goods manufactured at the Kaesong Industrial Complex are sold in a building just south of the Demilitarized Zone where South Korean workers have their immigration and customs paperwork processed and wait to join caravans headed to the North Korean facility. This image was captured in April of 2010. (Jon Rabiroff / S&S) 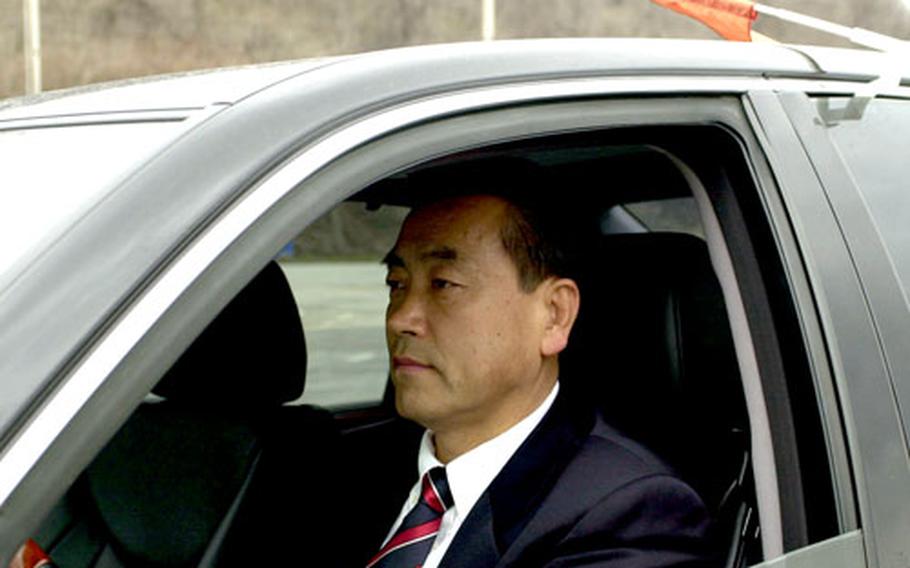 Kwak Sang-bae, president of Chung Song Trade Co., a women&#39;s clothing manufacturer, drives to join a caravan of vehicles headed from South Korea to the Kaesong Industrial Complex in North Korea. Kwak said he is worried he and his company could get caught in the middle if hostilities resumed between the two Koreas, "but, as a businessman, I am trying to do my best under the circumstances." (Jon Rabiroff / S&S) 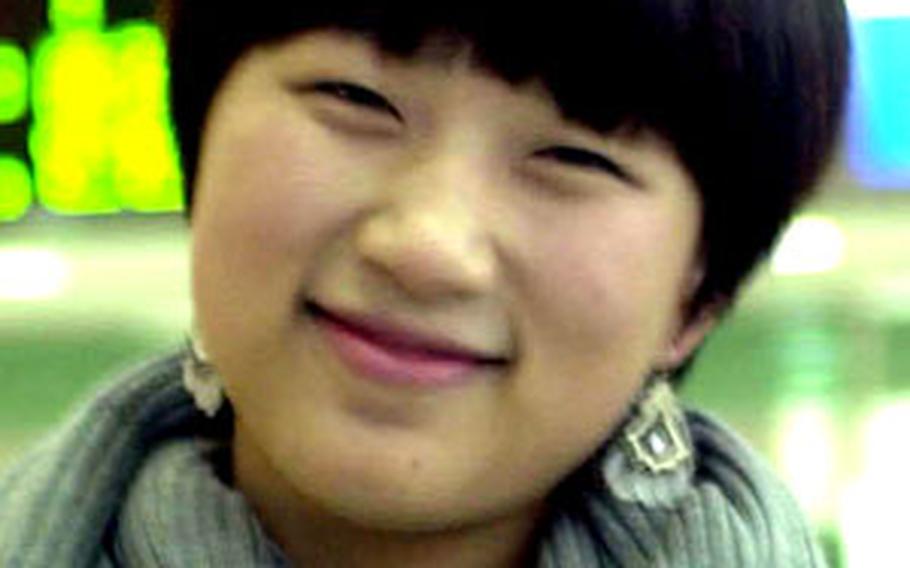 Kim Na-rae, 23, prepares to join a caravan headed from South Korea to the Kaesong Industrial Complex in North Korea, where she is employed as a clothing embroidery designer. Kim said she was initially nervous about working in North Korea, but eventually realized that the people there are a lot like South Koreans. (Jon Rabiroff / S&S)

Kim Na-rae regularly travels three miles into enemy territory inside North Korea to work as a clothing embroidery designer &#8212; ignoring threats that the leadership there will someday turn Kim&#8217;s homeland into a &#8220;sea of fire.&#8221;

She is one of the 1,000 or so South Koreans who routinely venture across the Demilitarized Zone into North Korea to work at the Kaesong Industrial Complex, even though the two countries are technically at war and come close to resuming hostilities a couple of times each year.

It was launched during the administration of former President Roh Moo-hyun.

However, long-term plans to expand the complex to more than 25 square miles, 2,000 companies and 600,000 workers are frequently stalled by continuing friction between the North and the South.

The future of the 5-year-old complex is once again in doubt.

In a statement released in early April through the official Korean Central News Agency, the North said it would &#8220;entirely re-evaluate&#8221; its involvement in the Kaesong Industrial Complex if relations continue along a confrontational path.

Last week, South Korean media reports &#8212; citing an unnamed South Korean Unification Ministry official &#8212; said North Korean military officials who inspected the complex expressed concerns the South could use high-rises there to spy on the North or sneak troops into the country through the complex&#8217;s water system. The inspection intensified speculation the North might end or suspend its participation in the complex.

In a dispute last week, the North confiscated five buildings owned by South Korea at Diamond Mountain &#8212; a jointly operated tourist resort in North Korea that, much like the industrial complex, was designed to benefit South Korean businesses and the North Korean economy.

The North said it was seizing the buildings as compensation for losses it has sustained since the South stopped sending tours in 2008 after a North Korean soldier shot a South Korean tourist who reportedly wandered near a restricted area. The North said the shooting was accidental.

During its short history, the industrial complex &#8220;seems to hang there in limbo &#8230; swinging back and forth depending on the political winds at the time,&#8221; according to David Garretson, an international relations professor at the University of Maryland&#8217;s University College in South Korea.

For her part, Kim said she plans to continue working, trying to shut out the political posturing.

When the complex opened in December 2004, benefits for both countries were clear.

The impoverished North would open a flow of cash into the country through land leases and wages that factories paid to tens of thousands of North Korean workers.

Businesses in the South would get access to low-paid workers for the labor-intensive production of clothes, electronics equipment, kitchen appliances and more.

If not for Kaesong, those businesses would have to look to open factories in such countries as Vietnam, Cambodia or Indonesia, according to Ok Sung-seok, president of the Nine Mode Co. and vice-chairman of the Kaesong Industrial Park Corporations Association.

Kaesong factories now produce goods worth more than $250 million a year. North Korean workers there make about $65 a month, but can earn as much as $90 by working overtime in addition to their regular 45-hour workweeks, Ok said.

South Koreans work primarily in managerial positions, and their pay varies depending on their employer. Most work three or four days a week, and while some return to their homes each day, many stay overnight between workdays in dormitorylike accommodations.

Kwak Sang-bae, president of the Chung Song Trade Co. at Kaesong, said every business in the complex has a North Korean government official assigned to oversee and represent North Korean workers.

To Ok, the arrangement at Kaesong goes beyond commerce.

Ok fears further growth in factories could be jeopardized &#8220;because of the latest aggravated, unstable situation between the two Koreas.&#8221;

Because relations between the two Koreas have been tense even in the best of times, transportation between South Korea and the industrial complex is complicated.

For the project to begin, both countries had to clear what is now the Western Transportation Corridor &#8212; a yearlong effort that, on the South Korea side alone, required the removal of 1,700 land mines, Son said.

Now 20 DMZ convoys cross each day, with workers from the South going back and forth and materials heading North and manufactured goods heading South. Everybody must clear customs and immigration in both countries, going both ways, and no one is allowed to cross the DMZ without being granted clearance at least three days in advance, Son said.

After manifests are checked and immigration and customs are cleared, vehicles heading north line up for inspection. South Korean and U.N. vehicles then escort them as a convoy from the southern boundary of the DMZ to a point close to the Military Demarcation Line &#8212; the official border between the two countries and the midpoint of the DMZ.

After the convoy crosses the border, two North Korean military jeeps take over escorting duties to the industrial complex.

The corridor has been closed to vehicles on occasions when tensions between the two countries have been high. Son said the last time was for two days during the 2009 U.S.-South Korea Key Resolve/Foal Eagle exercise, an annual event the North routinely condemns as an act of aggression.

Ok said North Korean and South Korean workers at the complex are free to talk with each other about anything, except politics or government.

&#8220;We usually talk about our families, like how your children study well at school, or about our lives,&#8221; he said. &#8220;Listening to them, I cannot help thinking that there is a huge difference in the standards of living between us.

Kwak said that when his company opened a men&#8217;s clothing factory in the complex in 2007, Moon Pies were handed out to all the workers.

None of the North Koreans ate their snack.

Nationalism does sometimes find its way into conversations.

Yu Eun-jae, who is in charge of distribution for a cell phone parts manufacturer in the complex, said he stopped sharing details of his personal life at work, because a North Korean worker kept saying how far superior his country&#8217;s education system is compared to South Korea&#8217;s.

Kwak said he believes North Korean workers at the Kaesong factories enjoy an atmosphere of freedom they would not find in state run businesses in the North.

Still, he added, &#8220;I am afraid and worried that we could be in danger if hostilities get worse. But, as a businessman, I am trying to do my best under the circumstances.&#8221;

The complex for both sides &#8220;is very profitable. At the same time, the communication is there for both sides,&#8221; said Son, the Canadian lieutenant commander with the U.N.