Futenma troops step up to back blood drives 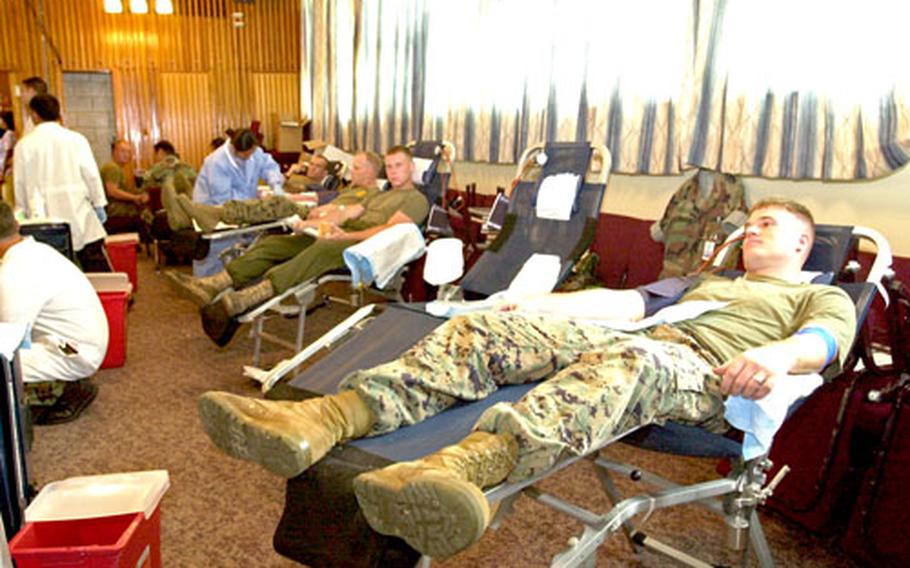 Wheeler routinely organizes blood drives on the air station and always has free food, prizes, and most recently, time off work for those who donate.

He added that he enjoys being the middleman, linking the Armed Forces Blood Bank Center on Camp Lester to donors. He also said commanding officers of the various units support giving time off to their troops.

During the last day of the recent drive, C. Tracy Parmer, donor recruiter, said support shown from all at the air station has been outstanding.

Parmer said drives that Wheeler coordinated have collected almost 1,000 units of blood. On Thursday the center netted 166 units and another 50 by noon on Friday.

Parmer said the center needs about 400 units a month to meet its demand throughout the Pacific. Some of the blood collected Thursday was used the same day as a patient was evacuated off the island.

One donor at Friday&#8217;s event knows firsthand the importance of blood donation. Sgt. Robert Gosse, who works in aircraft recovery, said his life was saved after he received a transfusion several years ago at Camp Lejeune, N.C.

While stationed at nearby Cherry Point, N.C., Gosse had a tonsillectomy. About a week after the procedure he began spitting up blood. A fellow Marine was there and help was called.

With no helicopter available for transport to Camp Lejeune, Gosse was taken by ambulance and given several units of blood during the trip. The next day, he said, he awoke in intensive care and was told the cauterization done to close blood vessels after his tonsils were removed had opened up. He&#8217;d lost one-third of his body&#8217;s blood.

While the offer of time off may have been enticing for some last week, the Marine sergeant said he gave because he knows it makes a difference.