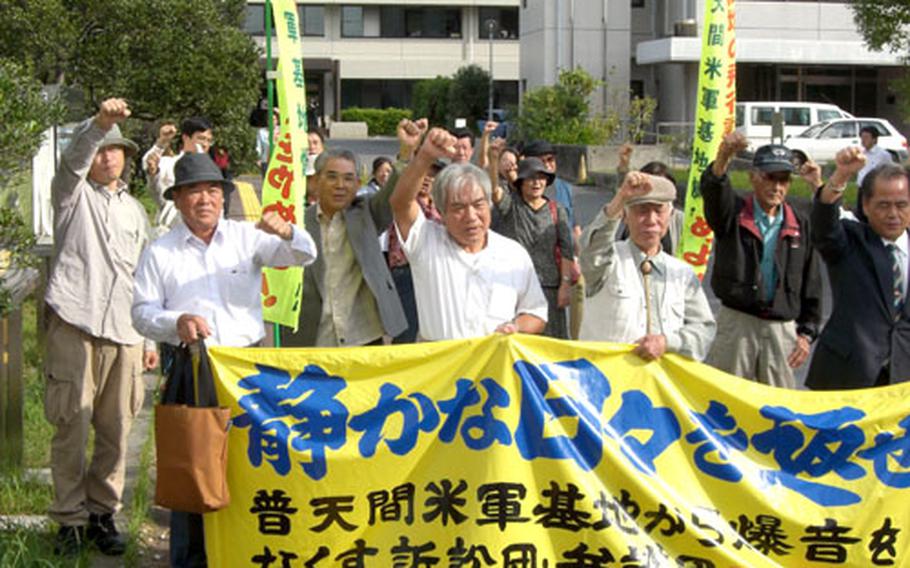 Futenma residents and their supporters gather Thursday at the Okinawa Branch of Naha District Court in support of an ongoing lawsuit against the Japanese government over aircraft noise from Marine Corps Air Station Futenma. (Chiyomi Sumida / S&S)

The jarring noise and vibrations caused by helicopters also is endangering their health, the residents claim.

Lawyers for the government countered that the noise from the air station&#8217;s flight operations does not exceed tolerable limits.

The original lawsuit, filed by 404 Ginowan residents in 2002, named the Japanese government and the base commander as co-defendants, claiming noise from the base operations damaged their physical and mental health. They sought an end to flight operations between 7 p.m. and 7 a.m. and $2.56 million in compensation.

However, Japan&#8217;s Supreme Court dismissed the case against the base commander last March, ruling the Japanese government was the sole defendant and could be responsible for any damages.

Nozomi Kanetaka, the residents&#8217; lawyer, said the helicopter noise affects civilians living near the base more than jet aircraft do, causing discomfort from &#8220;headaches, sleep disorders and irritation.&#8221; He cited an Okinawa prefectural government noise study that found the helicopter noise exceeded what the Environmental Ministry considered an acceptable level.

Government lawyers countered that the methodology used in the prefecture study was flawed.

&#8220;Their sampling method failed to eliminate any bias factors,&#8221; the lead government lawyer argued, submitting a large pile of documents as evidence. &#8220;The grounds for the cause of hearing losses were not thoroughly studied.&#8221;

Noise levels registered at the air station did not exceed the benchmark for hearing loss, he said.

Kanetaka argued that the constant low-frequency noise from the helicopters complicates noise problems at the air station.

&#8220;Low-frequency noise is not easily diminished by distance. It has a nature of infiltrating obstacles, therefore soundproofing does not help,&#8221; he said. &#8220;Residents near Futenma air station are compelled to live in an abnormal environment, where they are exposed to roaring aircraft noise when they open windows and suffer from low-frequency noise when they close windows.&#8221;

MCAS Futenma is to be closed once a replacement facility is built on Camp Schwab by 2014.

The next court session is set for Jan. 18.