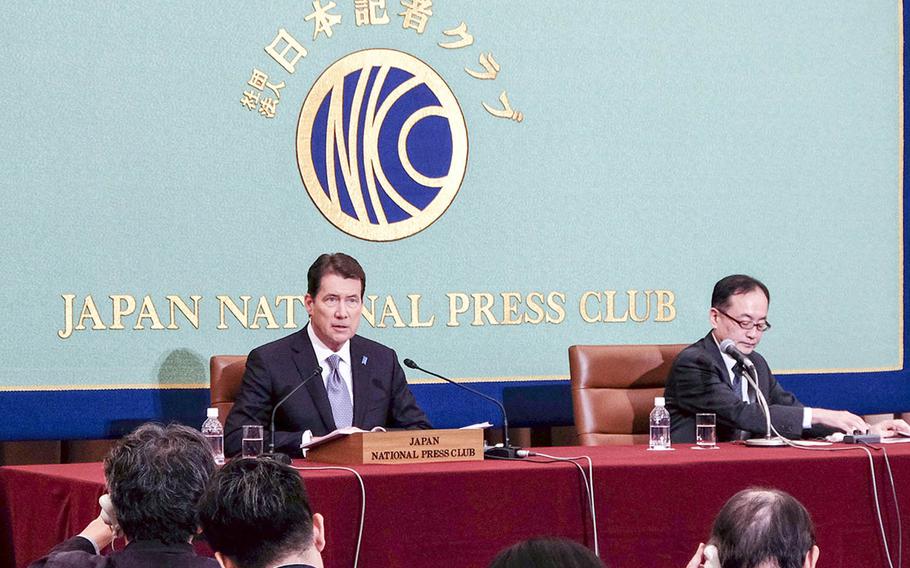 TOKYO — “Considerable progress” is being made on a controversial project to relocate a large Marine base within Okinawa, the United States’ new envoy to Japan said Friday in Tokyo.

U.S. Ambassador to Japan William Hagerty, speaking to reporters at the Japan National Press Club, also called the plan to move Marine Corps Air Station Futenma to Henoko in Okinawa’s rural north the “only solution,” despite fervent protests from locals who want the base moved completely off the southern island prefecture.

“It was clear to me that there are issues surrounding the Futenma location,” said Hagerty, who visited Okinawa earlier this week. “The population has grown significantly around [Futenma]. The only solution to this date that has been negotiated has been relocating to Henoko.”

While on Okinawa, Hagerty met with anti-U.S. base Okinawa Gov. Takeshi Onaga, who told him the relocation plan amounted to “discrimination” against Okinawans, according to local media reports. Onaga was elected in 2014 after campaigning on stopping the relocation and expelling the Marine’s controversial Osprey tilt-rotor aircraft.

The ambassador told reporters Friday that keeping the base within Okinawa is “necessary,” considering the recent uptick in tensions with North Korea, which has conducted a spate of ballistic-missile tests this year that landed in waters near Japan.

“I look forward to making more progress in Okinawa, in a manner that minimizes disruption but maintains our readiness, which is critical at a time like this when the North Korean regime is putting so much pressure on national security in the region,” he said.

“We made significant progress on trade and security issues during the visit,” he said. “U.S, and Japan relations are closer than they’ve ever been before. I’m very optimistic about the future of our relationship.”

“Our goal and our intent is to denuclearize the [Korean Peninsula],” he said.

Japan will take on a larger role in defending the region, and the U.S. will support this by helping to expand its defensive capabilities, the ambassador added.

“The United States will strengthen its presence in this region and Japan will assume larger roles and responsibilities in the alliance,” he said. “The president underscored his commitment to make available advanced defensive equipment as Japan expands its defense capabilities. We have unique threats in the region, but we see that threat the same.”