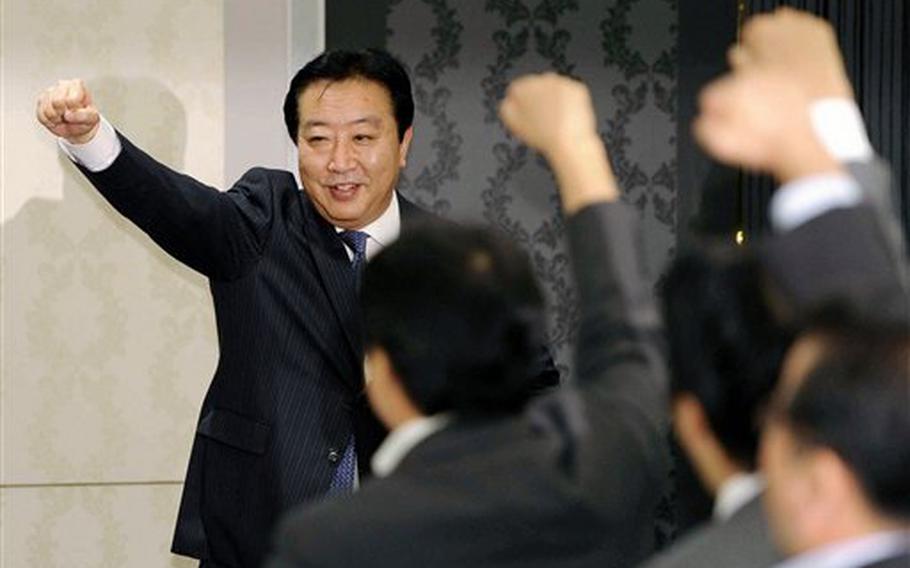 Japan's Finance Minister Yoshihiko Noda (back) raises his fists before his supporters in Tokyo on Aug. 29, 2011, prior to a meeting of his Democratic Party of Japan to hear speeches of candidates before holding a vote to pick a successor to outgoing Prime Minister Naoto Kan. (Kyodo/AP)

But it is unclear whether Noda, 54 &mdash; who became the country&rsquo;s sixth prime minister in five years following Monday&rsquo;s election &mdash; will be able to push through the unpopular U.S. military realignment while the country struggles through an economic crisis and the worst disaster in generations.

A prolonged U.S. recession also has cast doubt on the multibillion-dollar plan to relocate the Marine Corps Air Station Futenma to northern Okinawa and move 8,600 Marines to Guam. The Senate is proposing to eliminate any funding for the project in the upcoming year&rsquo;s federal budget, calling it unaffordable, and federal auditors have said the military has not properly planned or tallied the full cost, which could reach nearly $24 billion over the next decade.

&ldquo;U.S.-Japan relations, including the Futenma move, is a matter of tomorrow but recovery from the [earthquake] disaster, yen crisis and economic problems are matters of today,&rdquo; said Masaaki Gabe, professor of International Relations and the director of the International Institute for Okinawan Studies at the University of the Ryukyus.

Japan was already facing huge public debt and inflated currency when a massive earthquake and tsunamis raked its northeastern coast in March, killing tens of thousands, destroying coastal towns and unleashing a nuclear disaster. Noda, who was the country&rsquo;s finance minister, was elected largely on his economic experience and hopes in the Diet that he could solve Japan&rsquo;s money troubles.

Gabe said the new prime minister is unlikely to bring any change to current military realignment plans, which have been in stalemate for at least two years and are now overshadowed by a raft of other issues.

&ldquo;Nothing will change from where we are now,&rdquo; he said. &ldquo;Noda will take no initiative on the move because there are many other things that take priority in today&rsquo;s Japan.&rdquo;

The U.S. Embassy said Tuesday it looks forward to working with Noda but refrained from commenting directly on the Futenma issue.

&ldquo;Our alliance has flourished under each Japanese prime minister and U.S. president for the past half-century,&rdquo; the embassy said a written statement. &ldquo;We look forward to continuing our close cooperation with the government of Japan and the next prime minister across the broad range of issues facing our two nations.&rdquo;

Even if Japan overcomes its current crisis, Okinawa is likely to remain a major stumbling block for politicians at the national level.

The island has long resented U.S. aircraft noise and hosting sprawling bases, and it staunchly opposed the 2006 U.S.-Japan pact to keep the Futenma air station on the island despite a planned reduction of overall forces.

Prime Minister Yukio Hatoyama was elected in a 2009 landslide on promises to move Futenma off Okinawa and resigned less than a year later after admitting Japan could not break its 2006 agreement with the United States. Former Prime Minister Naoto Kan backed the agreement but was unable to make any progress on the military realignment over the past year before resigning due to concerns over his handling of Japan&rsquo;s ongoing crises.

On Monday, the Okinawa government said it will hold firm on its position and urge Noda to move the Futenma base off Okinawa.

&ldquo;I will ask the new government to show concrete and effective measures concerning the reduction in the burden that Okinawa has long shouldered from the presence of U.S. military,&rdquo; Okinawa Gov. Hirokazu Nakaima said in a prepared statement. &ldquo;About moving Futenma air station, I ask to move the operations out of Okinawa at the earliest possible date.&rdquo;

The opposition and delays in Japan have already forced the two countries to scrap the realignment deadline. Secretary of State Hillary Clinton and then Secretary of Defense Robert Gates announced in June that a 2014 completion date was no longer possible following a meeting with the Japanese defense and foreign ministers.

Meanwhile, the project could be further delayed &ndash; or derailed &ndash; by the growing opposition in the U.S. Senate.

Opposition has been led by Sen. Carl Levin, D-Mich., chairman of the Armed Services Committee, and Sen. Jim Webb, D-Va., who traveled to Okinawa earlier this year and then publicly urged the Department of Defense to scale back its plans in the region because they are too expensive.

The Senate adopted budget language that withholds funding in the coming year unless the military can better justify the need for the project and provide better cost figures.

In July, Sen. Tom Coburn, R-Okla., proposed $9 trillion in federal spending cuts that would abandon the realignment plan on Okinawa completely and move Marine forces back to the U.S.

&ldquo;The strategic rationale for maintaining conventional ground troops in the middle of Western Europe and on islands in Asia has passed given the end of the Cold War,&rdquo; Coburn wrote in his budget plan titled &ldquo;Back in Black.&rdquo;

Debates over spending cuts are likely to heat up in Washington, D.C. as the budget is hammered out in Congress over the coming months.

In Tokyo, Noda said he will continue the effort on the military project.

&ldquo;In the light of an agreement made between U.S. and Japanese governments, I will follow through the policy to reduce the burden of Okinawa as much as possible,&rdquo; Noda said during a press conference following his election.