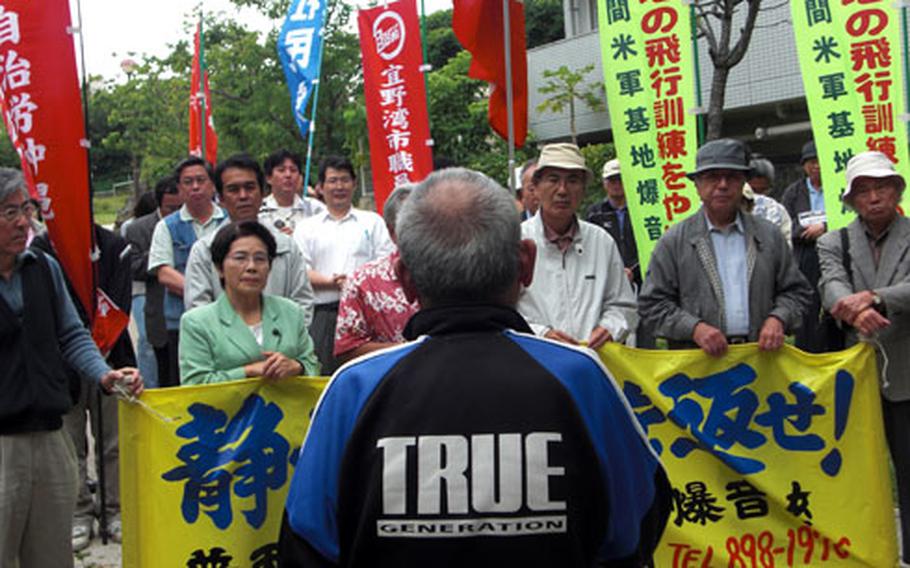 Futenma residents rally Thursday in front of Fukuoka High Court in Naha, Okinawa, before the opening of an appeals case over aircraft noise at Marine Corps Air Station Futenma. (Chiyomi Sumida/Stars and Stripes)

NAHA, Okinawa &#8212; The Fukuoka High Court on Thursday heard the first arguments in separate appeals of a ruling on noise at Marine Corps Air Station Futenma.

In June, Naha District Court ordered the Tokyo government to pay 396 residents about $1.3 million for physical and mental damages caused by noise from the air station. However, the ruling dismissed residents&#8217; demands to limit flight operations at the facility between 7 p.m. and 7 a.m., saying the Japanese government has no control over military operations at the air station.

Both residents and the government appealed.

"The lower court acknowledged the damage, but did nothing to mend it," Zenji Shimada, who now leads 392 plaintiffs, said before a three-judge panel at the Naha Branch of Fukuoka High Court. He said the compensation the court awarded &#8212; about $1 per day per person &#8212; was far from a solution and that the ruling was contradictory.

"We are not here to beg for money," he said. "What we seek is quiet nights, the dignity of humanity."

"The majority of the aircraft assigned to the air station are helicopters," a lead lawyer for the government said.

Therefore, the court should consider that the areas affected by the noise are smaller than at other military bases with fighter jets, he said.

"Besides," he said, "in recent years, noise levels at the air station have been largely reduced."

He contended that many residents moved to the neighborhood despite knowing about the noise problem.

The air station is scheduled to be closed after a replacement facility with a V-shaped runway is built by 2014 in the lower area of Camp Schwab.

Japan&#8217;s Ministry of Defense earlier this month released findings from an environmental survey that sided with the government&#8217;s design for the planned airfield site. Ministry officials began briefing local communities about the survey results this week.

The next appeals hearing is scheduled for May 26.