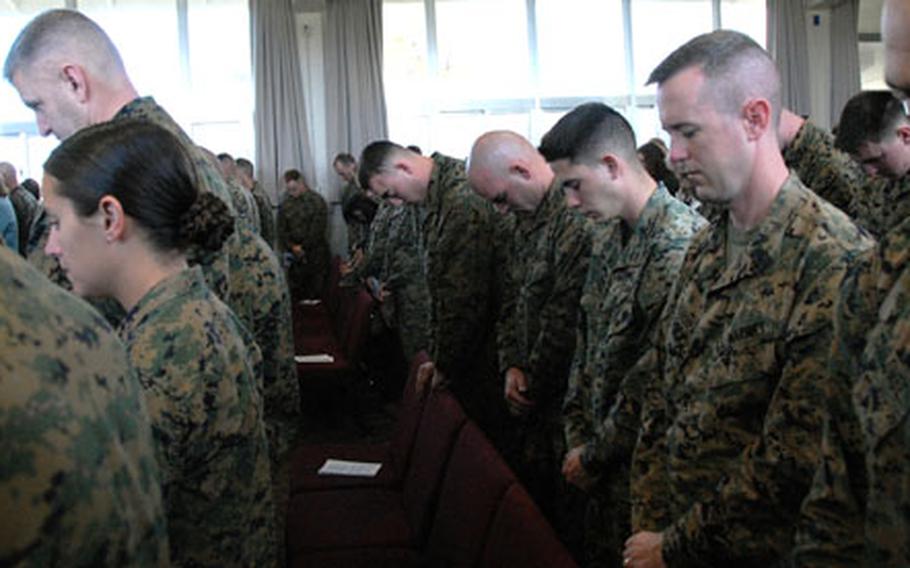 Marines listen to prayers during the memorial service Friday for Cpl. Thomas Saba, who was killed in Iraq last week. (Megan McCloskey / S&S)

MARINE CORPS AIR STATION FUTENMA, Okinawa &#8212; Cpl. Thomas Saba was due to get out of the Marine Corps.

But after being inspired to join the service by the events of Sept. 11, 2001, he wasn&#8217;t ready to leave his unit and watch it deploy to war without him. So he extended.

The 30-year-old crew chief was killed just a few weeks into his deployment when his CH-46 Sea Knight helicopter was shot down near Fallujah, Iraq, on Feb. 7.

At a memorial service Friday, at which mourners crammed into the tiny Futenma chapel, friends said Saba&#8217;s smile left a lasting impression.

&#8220;He seemed never to have a bad day,&#8221; Master Gunnery Sgt. Wayne Williams wrote in a letter from Iraq that his wife, Sheila, read at the service. &#8220;He would come to work day after day laughing and motivating his fellow Marines.&#8221;

Saba also was a dedicated teacher, who, as an older corporal, looked out for the younger guys, said Staff Sgt. Phillip White.

Capt. Jason Barnes, a pilot who flew with Saba for about a year, said when he needed to know the nuances of a system, he went to Saba.

&#8220;He always made me feel confident,&#8221; Barnes said, after holding up his notebook and showing where he had written down one such procedural explanation from Saba.

Saba also endeared himself to the families of his fellow Marines.

Gracious and polite, he made sure to thank the wives for holiday celebrations and get-togethers, Amy McGuinness said.

Erika White, teary-eyed with a voice barely above a whisper, said she cherishes funny photos she has from a Thanksgiving Saba spent at her house. They were trying to take a group picture but her daughter wasn&#8217;t sitting still for the shot. Instead, she constantly was reaching out for Saba.

Her husband wrote in his letter that Saba always stood out &#8220;in the crowds that loved to be around him.&#8221;