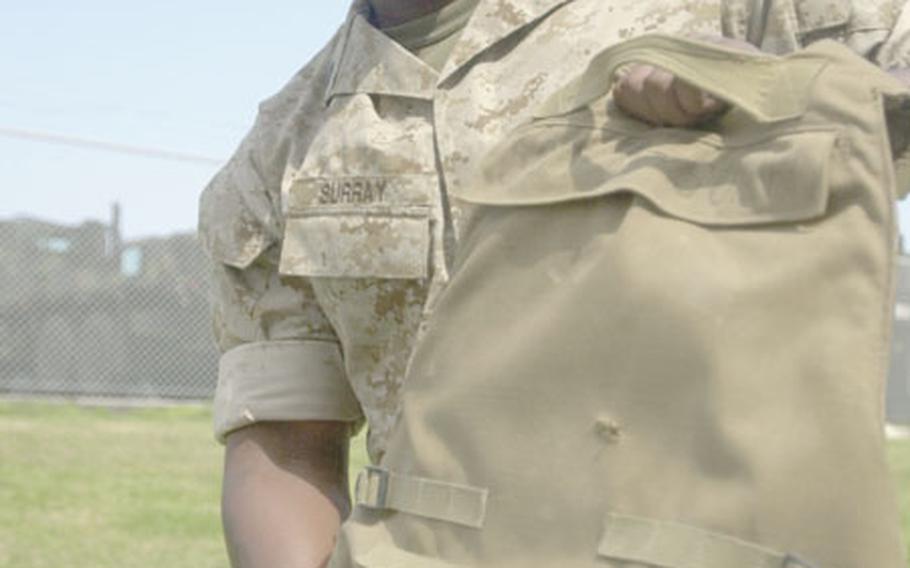 Marine Sgt. Dwayne L. Surray holds up the flak jacket he was wearing in Iraq on March 23, 2003, when he was shot in the back. He keeps the vest in the 1st Stinger Battery classroom to remind the young Marines in the unit why their training is important. (Fred Zimmerman / S&S)

Marine Sgt. Dwayne L. Surray holds up the flak jacket he was wearing in Iraq on March 23, 2003, when he was shot in the back. He keeps the vest in the 1st Stinger Battery classroom to remind the young Marines in the unit why their training is important. (Fred Zimmerman / S&S) 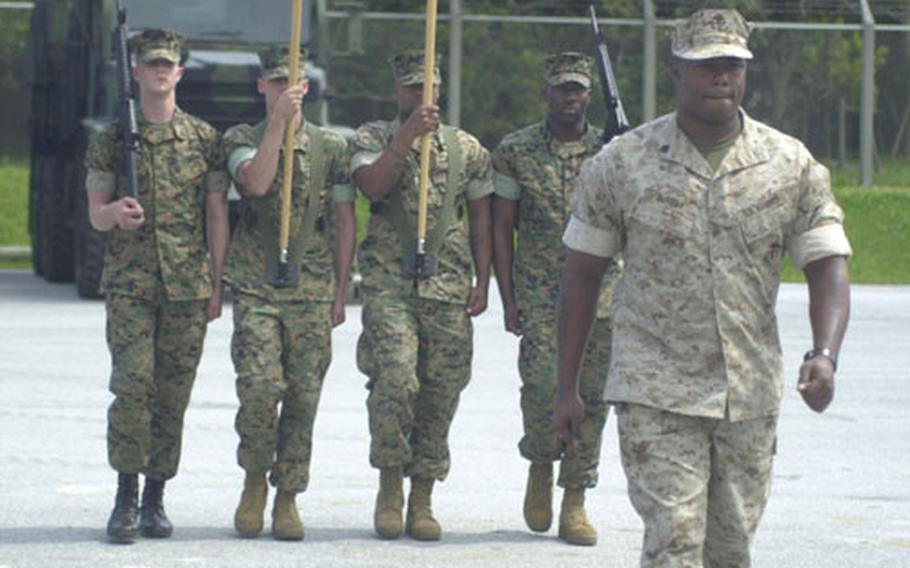 FUTENMA MARINE CORPS AIR STATION, Okinawa &#8212; A Marine here will receive a Purple Heart medal next week for wounds he received while serving in Iraq.

Marine Sgt. Dwayne L. Surray, a low-altitude air defense &#8212; or stinger &#8212; gunner, now with the 1st Stinger Battery here, is to receive the medal at 10:30 a.m. Monday, more than a year after taking a bullet in the back during a firefight.

He was injured March 23, 2003, near Diwaniyah, Iraq, while traveling in a 40-vehicle convoy. He then was part of the Light Armored Vehicle-Air Defense Platoon from 4th Light Armored Reconnaissance Battalion at Camp Pendleton, Calif.

On March 23, his unit was on an abandoned highway heading toward Baghdad when, in the distance, the Marines saw flickering lights on each side of the highway. Surray said that was radioed in but they were told friendly units were on each side of them.

Those &#8220;friendlies&#8221; actually turned out to be Republican Guard units communicating via light flashes.

Surray said the situation started to unfold when one of the Marines from his unit radioed that a vehicle pulled up and let out Iraqis.

Surray said his vehicle carried not only Stinger missiles but also a 25 mm Gatling gun that can spray 1,800 rounds per minute. He said the Marines quickly fired the gun but it jammed and they were forced to use their M-16 rifles.

Because he was standing in the turret atop the vehicle, Surray said, he was exposed from the waist up. He had fired only about 15 rounds from his rifle when &#8220;it felt like I was hit by a tree.&#8221;

Surray was shot in the back, but the bullet didn&#8217;t totally penetrate his body and did no major damage. He said the 7.62 mm round from an AK-47 had gone through the Stinger launcher before hitting and penetrating his flak jacket &#8212; which didn&#8217;t yet have the new Interceptor body armor plate.

Although the wound wasn&#8217;t deep or major, Surray said, it was extremely painful.

Once there, the corpsman finally was able to check Surray&#8217;s wounds, which required only basic first aid.

Surray said the firefight lasted about an hour. He said his vehicle took two hits from rocket-propelled grenades; during the fight, more than half the convoy&#8217;s vehicles took hits from such grenades or from small-arms fire. Still, Surray said, he was the only Marine injured during the battle.

The Marine said although his wound wasn&#8217;t severe, he still was sent to the rear with supply and support personnel to have ample time to heal.

Surray&#8217;s flak jacket now sits in the unit&#8217;s classroom. He displays it there to show young Marines how important their training is and how real the dangers are.

As for the Purple Heart, Surray said its significance only recently hit home.