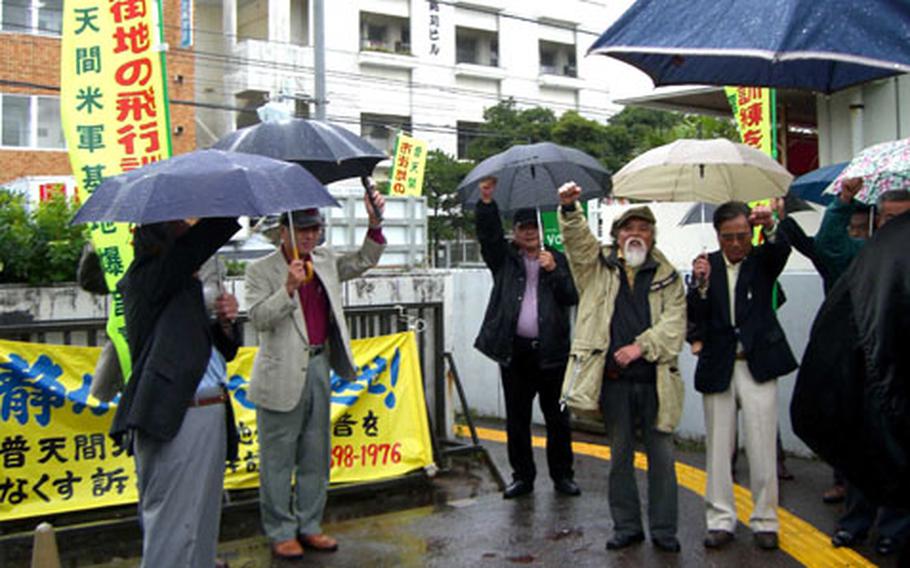 About 20 residents and their supporters rally before a court session Thursday at the Okinawa City Branch of the Naha District Court. About 400 Ginowan residents are suing the national government, seeking $2.56 million in damages. They claim to suffer from aircraft noise from Marine Corps Air Station Futenma. (Chiyomi Sumida / S&S)

During a hearing at the Naha General District Court&#8217;s Okinawa City branch, the residents&#8217; lawyers argued they should be compensated for living near the base as long as it remains active.

In 2002, some 404 residents of communities adjacent to the base sued, claiming that noise from Futenma air operations damaged their physical and mental health. They are seeking a 7 p.m. to 7 a.m. ban on flight operations and $2.56 million in compensation, which includes compensation for up to a year after oral arguments in the case are finished.

In written statements submitted earlier to the court, government lawyers countered that paying residents for such future damage is unacceptable.

But the residents countered Thursday that Marine flight operations at the base likely will extend beyond even the one-year, after-oral-arguments period.

The current plan to build a replacement air facility on Camp Schwab has too many uncertain factors to assume Futenma will be closed anytime soon, said Tomoko Uehara, a lawyer for the residents.

The next session is scheduled for March 8.