Furloughs kick in amid anger, resignation 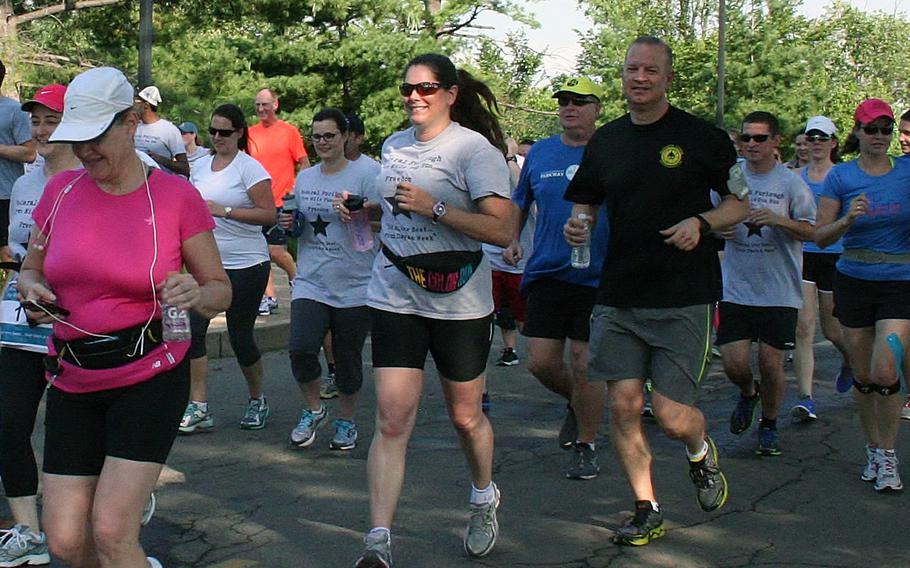 Buy Photo
DOD civilian employee Christine Smith (center) was one of nearly 50 people who set out across the street from the Pentagon on a five mile run for furloughed defense civilians on July 8, 2013. Organizers cut the run to four miles mid-race to symbolize a 20 percent pay loss. (Chris Carroll/Stars and Stripes)

Buy Photo
DOD civilian employee Christine Smith (center) was one of nearly 50 people who set out across the street from the Pentagon on a five mile run for furloughed defense civilians on July 8, 2013. Organizers cut the run to four miles mid-race to symbolize a 20 percent pay loss. (Chris Carroll/Stars and Stripes) 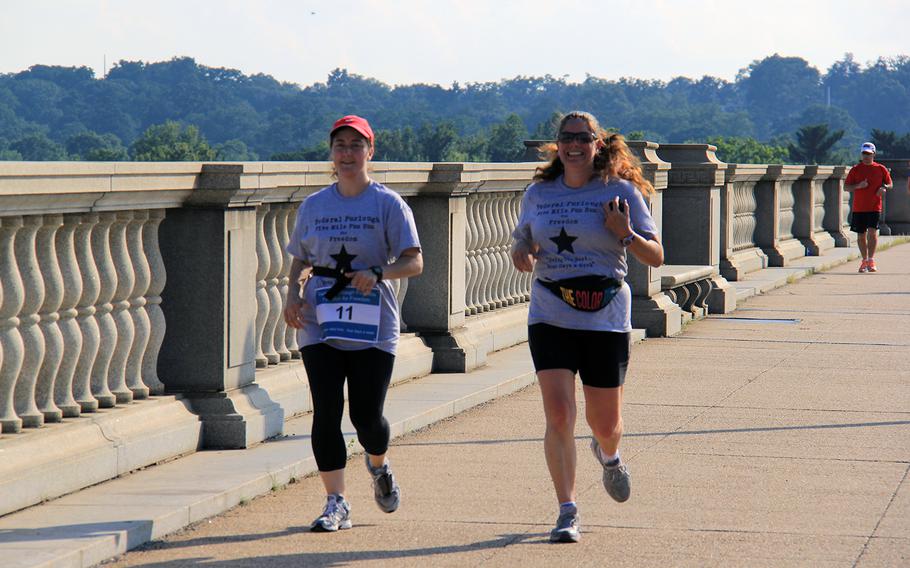 Buy Photo
DOD civilian employee Christine Smith, right, was one of nearly 50 people who set out across the street from the Pentagon on a five mile run for furloughed defense civilians on July 8, 2013. Organizers cut the run to four miles mid-race to symbolize a 20 percent pay loss. (Rick Vasquez/Stars and Stripes) WASHINGTON — About 650,000 Defense Department civilians began doing their part this week to save the department nearly $2 billion — by not coming to work. They’re not exactly enthusiastic about pitching in.

But they found things to do. Some strategized ways to cut their own budgets, while others took the opportunity to formally protest their furloughs. According to the Merit System Protection Board, which adjudicates disputed personnel actions by the federal government, nearly 900 federal employees, including DOD workers, had filed appeals as of early Thursday.

Others worked out some of the frustration through exercise.

“On a normal day, I’d be working on combating terrorism in South Asia,” said Christine Smith, a civilian employee in the Office of the Secretary of Defense who was furloughed Monday. “Today, I’m going for a run.”

Smith was one of dozens of Pentagon workers who met Monday afternoon for a 5-mile “fun run” from the building’s north parking lot to the U.S. Capitol. But organizers unceremoniously cut it a mile short to symbolize the 20 percent pay cut imposed by the one-day-per-week furlough, which could run through September.

“That’s a mortgage payment each month that’s being lost — it’s very significant for my budget,” she said. Before jogging away, she added that she planned to make up some of her personal deficit through a renewed devotion to her hobby: extreme couponing.

Congress wouldn’t win any popularity contests among the furloughed.

“I hear many people complaining about the pay reduction, the decrease in leave earned and the retirement effects,” said Chett Forbus, a Navy veteran who is now a DOD civilian in Maine. “Those are the cold, hard effects of the bigger problem: elected officials.”

“We have saved everything that we could, canceled vacations, cut services, combined services, changed the way we grocery shop, basically just pinched the penny wherever we could,” he said. “We will survive because of proper planning. The overwhelming, scary part of this is the same elected officials have done nothing to prevent this from happening again.”

DOD civilians overseas are feeling the same pinch — trying to make the best of their involuntary free time, and worried about where it’s all headed.

The first of 11 furlough days were to begin Friday for colleagues Nancy Hines, Dee Trigilio and Gemmel Bagley, U.S. government civilians employed by the 86th Force Support Squadron on Ramstein Air Base, Germany.

The trio said they are taking the weekly mandatory pause from work and 20 percent pay cut in stride, and plan to tackle unfinished projects at home or to spend time with their children.

Hines, 54, plans to do yard work and car repairs, while Trigilio will transfer family photos to CDs and Bagley will stay at home with her children, ages 9 and 12.

“I’m looking forward to it,” Hines said. “I’m normally one who doesn’t take leave. Now there’s time to do your own ‘honey-do’ list, take advantage of day trips.”

They’ve found ways to tighten their budgets and have put off big purchases and family vacations. If it is necessary and strengthens the country, they can take it, each said.

But it’s easy to be optimistic now, before some of the unknowns have become reality, the women said. They worry about how much extra work will pile up in their absence, about squeezing 40 hours of work into 32-hour weeks, and about actually making do with less income when the smaller paychecks start rolling in and medical premiums don’t budge.

They haven’t had a pay increase since 2010, and performance appraisal incentives for this year are likely on hold. Bagley, 42, is hopeful the furlough is a stopgap measure and won’t be repeated.

“To punish us again for next fiscal year would be the ultimate wrong,” she said.

Hines doesn’t see how it won’t happen again. “The budget is supposed to be less, that’s the rumor,” she said.

Hines said she’s worried about broader effects of furloughs. “What kind of signal are we sending to our adversaries when we’re having to furlough our civilians, when we’re not doing training or TDYs?”

For some DOD civilians, the furloughs are causing them to question the assumptions they’ve built their lives on.

“I took my wife and my older kid aside. I sat everyone down and we had a talk,” said Thibodeau. “We basically talked about cutting back anywhere we could, even keeping the lights off when we’re not in a room.”

Thibodeau originally was attracted by the stability of government work, but said he is pondering whether he’d be better off in the private sector.

In addition to furlough cuts, he’s one of 600 overseas employees who face the loss of housing allowances because of an error by human resources officials that has indebted those workers for past payments received.

“The government has taken so much from me. When we get back to the States, I’m thinking about looking into another career field,” said Thibodeau, an operations planner for U.S. Army Africa. “Maybe I’ll go back to school and get my masters in something.”