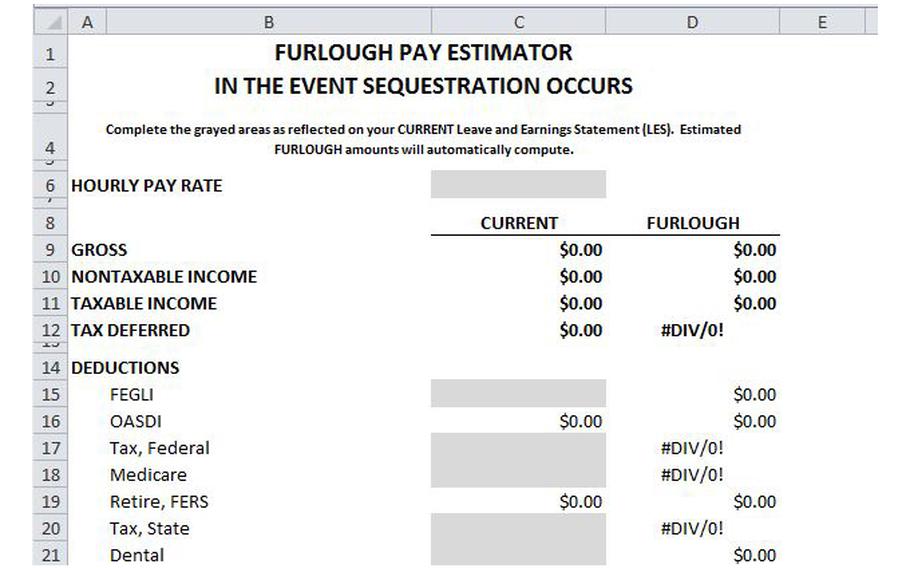 A screenshot of a furlough pay calculator for federal workers released by Yokosuka Naval Base. ()

YOKOSUKA NAVAL BASE, Japan — Federal workers now have a convenient way to calculate their loss in pay if planned furloughs of about 800,000 Defense Department civilians take effect.

Yokosuka Naval Base has posted a furlough pay calculator in spreadsheet format, which is also available through the Commander Fleet Activities Yokosuka Facebook page.

The spreadsheet allows federal workers to plug in their hourly pay wage, along with several possible deductions. It automatically calculates the expected 20 percent pay cut they will absorb if Congress does not stop $85 billion in across-the-board spending cuts from happening on Friday.

“Keep in mind that is not an official pay scale and only estimates how much your pay will change,” according to a base statement announcing the spreadsheet. “Also, the furlough is not set and may not happen.”

Most in Congress and in Washington now appear to be conceding that the March 1 deadline will pass without a change in the spending cuts, which are known as sequestration.

The nature of those cuts, which were meant to encourage Congress and the Obama administration to come to a targeted spending cut plan, give the Defense Department little flexibility to shift funds to priority areas.

Although spending cuts would result in immediate departmental budget cuts on Friday, Congress would still have time to avoid furloughs.

The furloughs, which can legally begin 45 days after the notification to Congress, would save $4 billion to $5 billion, DOD comptroller Robert Hale said Wednesday.