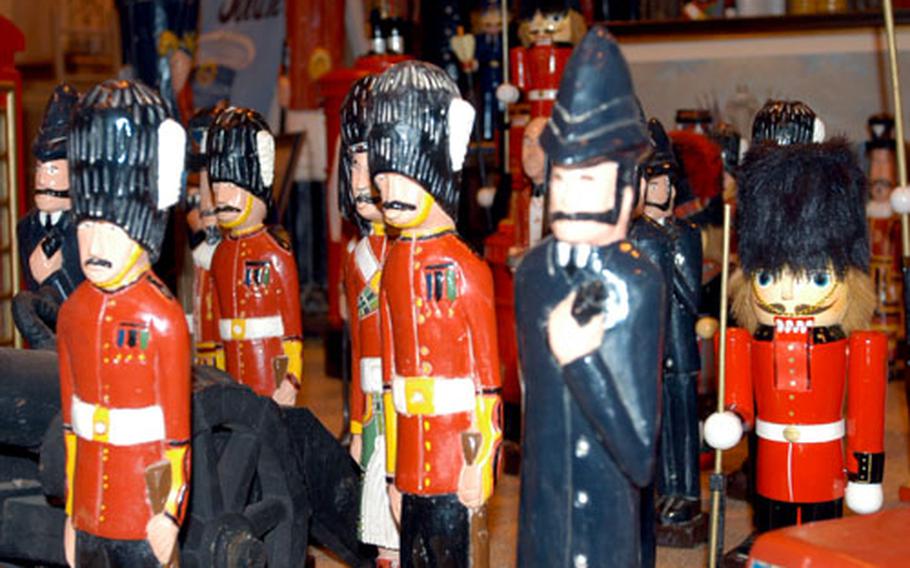 These colonial toy soldiers were among the the dozens of unique goods for sale at the bazaar. (Bryan Mitchell / S&S)

And the general showed up at Hangar Seven just to make sure everything went smoothly.

In the end, they all helped the annual Lakenheath Holiday Bazaar, held last weekend, raise tens of thousands of dollars for the two primary support agencies on the United Kingdom&#8217;s largest Air Force installation.

In turn, the Officers and Civilians Spouses Club and the Enlisted and Civilian Spouses Club use the proceeds to fund activities and programs year- round and to make donations to other base organizations and local British organizations, according to organizers Pam Gilbert and Jessica McCollum.

A 25-person organizing team worked for seven months and spent roughly $15,000 to bring together more than 100 vendors from across Europe.

The event has become so popular and widely known that a British peace group stages its annual event to coincide with the bazaar. However, neither the protesters&#8217; chants nor the rain clouds could stop the shopping bonanza.

In addition to the hangar full of merchandise, the bazaar boasted roughly a dozen carnival rides, including the classic bumper cars, as well as a beer tent.

Miller kept herself busy mixing flower, eggs and a host of other ingredients before frying up a batch of can&#8217;t-miss carnival funnel cakes. Seventy-five gallons of cooking oil ensured the 48th Dental Squadron kept the dough frying all weekend.

Tuckniss set himself in a corner of Hangar Seven with a miniature army of British colonial soldier dolls representing &#8220;the famous British empire regiments.&#8221;

Strange, meanwhile, became a reluctant children&#8217;s entertainer with an uncanny knack for converting long balloons into animals of the sea.

By the time the bazaar ended, organizers expected to have enough money to fund another year&#8217;s worth of fun, fellowship and philanthropy.

&#8220;This is a special event in that it all gets turned back in to the families here at Lakenheath,&#8221; Steel said.