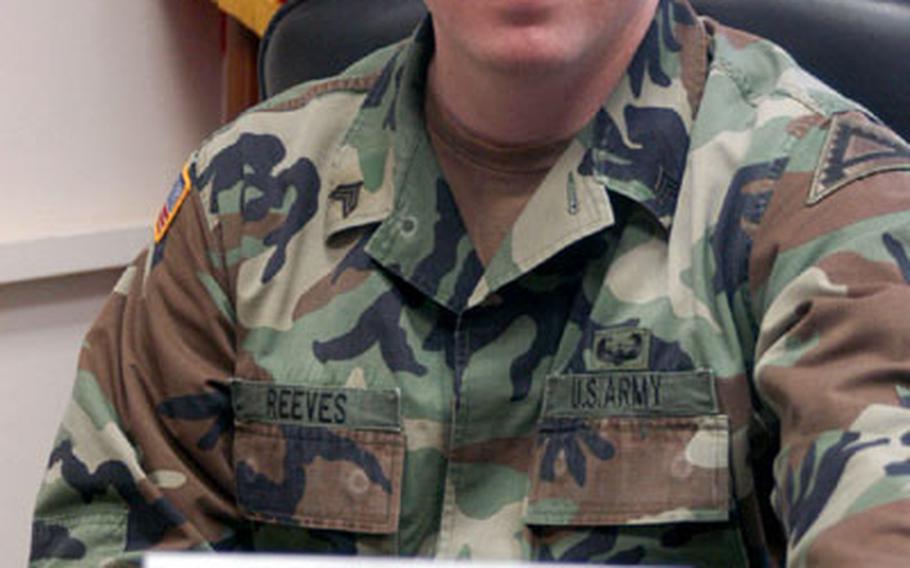 Sgt. Warren Reeves displays a drawing of the headstone that will finally mark his mother&#39;s grave in White Salmon, Wash., 20 years after her death. (Ben Murray / S&S)

Money only went as far as a service and the burial, and the funeral home put out only a small, metal plaque with a slip of paper attached bearing the name of Toni Reeves and the years of her life, 1950-1985.

But in time, said Reeves, now a 29-year-old emergency operations worker at the Grafenw&#246;hr training area, the paper weathered, the name disappeared and even the plaque was eventually removed from the site.

It was a hard day, he said, when he flew home on leave last year and drove the three hours to the cemetery in White Salmon, Wash., only to realize he couldn&#8217;t find his mother&#8217;s grave. All traces of the plot had been lost.

He searched the whole cemetery, even had a map to use as a guide, but had to leave without seeing the grave. Because she&#8217;d died when Reeves was only 9, he has few vivid memories of her, he said, and relied on periodic visits &#8220;as a way to talk to my mom.&#8221;

To have her physical resting place vanish was a tough blow.

So when Reeves returned to Germany, he resolved to find his mother&#8217;s grave and have it properly marked. He wrote to the funeral home that had overseen his mother&#8217;s burial and asked if the owners could help. It turned out they could locate the plot and order a headstone for it.

Reeves was relieved, he said, then further surprised when the funeral home offered to donate the $600 stone to him for serving in the military.

&#8220;Since you are serving our country and we appreciate your sacrifice and efforts, we would like to provide the headstone at no charge to you. Please accept it with our gratitude,&#8221; wrote a representative from White Salmon&#8217;s Gardner Funeral Home.

Derek Krentz, whose family runs the small funeral home, said he and his wife, Dominique, saw it as a concrete way to help a soldier, and took advantage of the opportunity.

It was a gesture Reeves said that was not only overwhelmingly generous for him and his family, but also an important example that Americans still back their troops abroad, regardless of polls or negative news about the military.

&#8220;Acts like this are a rare gesture and need to be passed on to let soldiers know that the American people still care,&#8221; Reeves wrote to the funeral home.