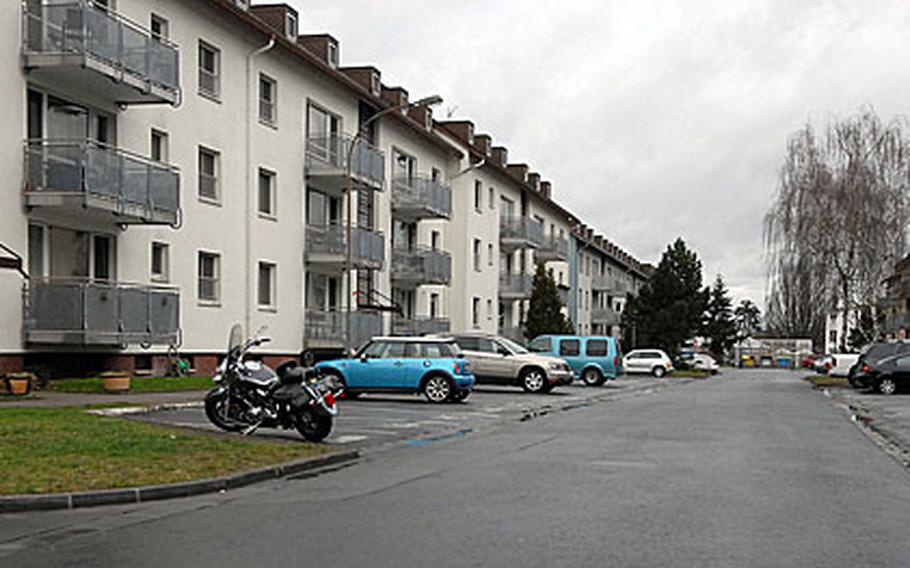 Except in rare cases, soldiers moving to Europe with their families will no longer be able to live on the economy and must live in base housing such as Lincoln Village in Darmstadt, Germany. (Michael Abrams / S&S)

HEIDELBERG, Germany &#8212; Another impressive funding shortfall in military accounts means U.S. Army Europe soldiers with families may no longer get to choose whether to live inside the gate or out in town.

The policy that previously allowed Army families a preference changed Jan. 4 when the head of the Installation Management Command put out a memo USAREUR-wide. It said that more than a $1 billion shortfall in the Army&#8217;s military pay account &#8212; the account used, among other things, to pay soldiers&#8217; housing allowances &#8212; meant it was time to conserve those funds. Garrison commanders were instructed to put families in family housing, if available.

Since then, soldiers moving with their families to Heidelberg have been assigned to on-post housing in apartments and duplexes as available inside Mark Twain Village and Patrick Henry Village.

Previously, the choice &#8212; either live rent-free in on-post housing (if available) or get a housing allowance and live in town &#8212; was with the family, according to Jack Gillund, an IMCOM spokesman.

The policy change does not affect unaccompanied senior enlisted (E-7 and above) and officers, Gillund said, who still may choose to live off post. It also does not affect single E-1s through E-6s, who have always had to live in the barracks, if space is available.

The memo also said the change would maximize occupancy of on-post housing, and maximize an investment in renovations of on-base housing.

&#8220;The structures have been upgraded, and they&#8217;re available,&#8221; Gillund said of Heidelberg on-base housing. He said the new policy directs housing to seek volunteers before making mandatory assignments.

Just like in all other aspects of life, in military housing choice, timing is everything.

Post housing is currently at 96 percent occupancy in Heidelberg, Gillund said. &#8220;According to my housing people, most people want to live on post,&#8221; he said.

Two-thirds of military members live off post, Defense Department-wide, according to a DOD Web site. After a 1995 report that said the condition of military family housing &#8220;made daily activities a trial and lowered morale,&#8221; the department got funding to create the Military Housing Privatization Initiative, which approved partnerships with private firms to build and manage military family housing.

Military members who choose to live in the on-base, upgraded and commercially managed units, pay rent using their basic allowance for housing.

But according to a military housing privatization Web site, military members would not be required to live in them and would not lose their housing allowance if they decided to live off post.

&#8220;Like all military family housing, servicemembers are not required to live in privatized housing,&#8221; the Web site says.