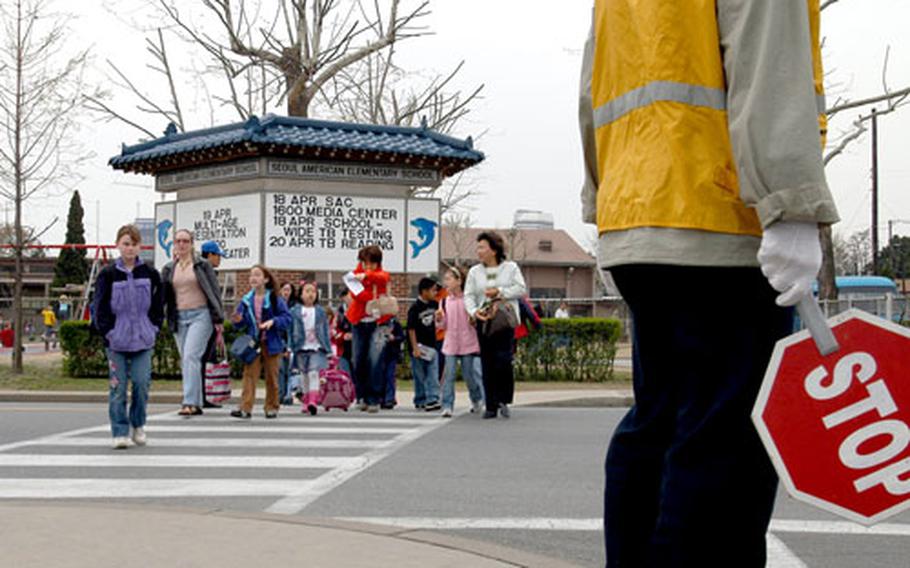 Hiring 13 part-time guards to help safeguard students going to and from elementary, middle and high schools on Yongsan costs about $95,000 a year, said Steve Davis, Area II Support Activity spokesman. Area II, not the Department of Defense Dependents Schools, pays for the guards.

Next year, that money will be gone, said Area II commander Col. Ron Stephens, who has directed his staff to work with parents and school officials to find a solution.

&#8220;Funding is an issue throughout the Army, and Korea is no exception,&#8221; according to a written statement from Area II Deputy Commander Tillman D. Moses.

&#8220;We continue to address options to meet the needs of our military community, just one instance of which is crossing-walk guards.

DODDS-Korea spokesman Peter Grenier said options might include finding a sponsor to help pay for the guards or asking military police to adjust their locations to increase efficiency.

But Lewis said she worried private sponsorship wouldn&#8217;t be sustained down the road and that a volunteer program wouldn&#8217;t work. She said parents would be the most likely candidates to volunteer, but they have their own children to care for in the morning or after school. Also, depending on volunteers in a place where many careers involve deployments and temporary duty assignments could prove problematic, she said.

In the past two months, the Osan Air Base elementary school started using such volunteers, according to principal Linda Kidd.

Maj. David Smith, an Osan spokesman, said the school has only two volunteers. He added that officials have put up speed-control signs and silhouette signs of soldiers reminding drivers to slow down.

Smith also pointed out that Osan is much smaller than Youngsan and the elementary school is tucked away from main roads.

Osan&#8217;s high school never has had a crossing guard program, but the staff is paying close attention to the Yongsan situation, said Superintendent Marie Cullen.