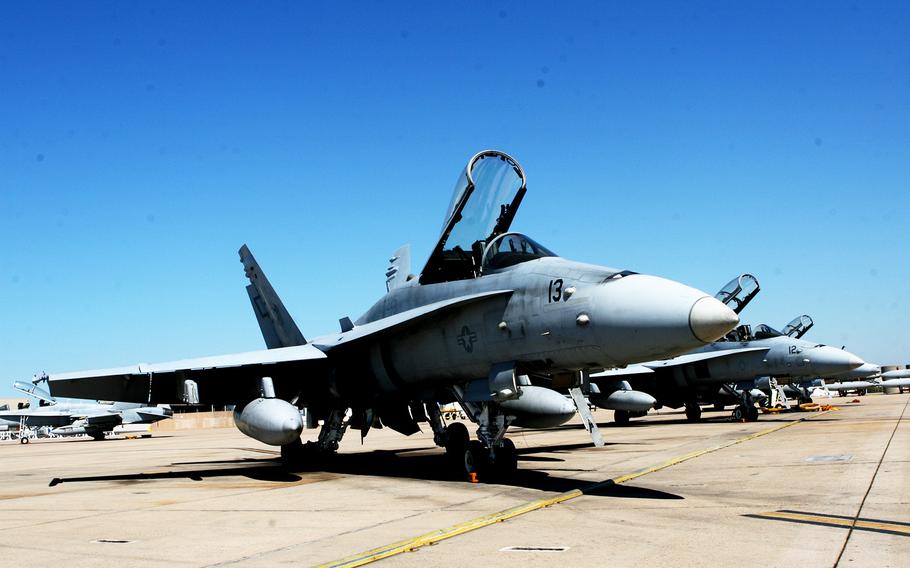 An F/A-18C belonging to Marine Fighter Attack Squadron 225 sits on the flight line at Marine Corps Air Station Miramar on Sept. 8, 2011. An aircraft from the base crashed in the desert near Twentynine Palms, Calif., on Oct. 25, 2016. (U.S. Marines)

WASHINGTON – The Marines could shut down 10 fighter squadrons in the summer if Congress does not pass the 2017 Defense Department budget, the commander of Marine Corps aviation said Tuesday.

“We’ll start shutting down squadrons that are not next to deploy,” Lt. Gen. Jon Davis told members of the House Committee on Armed Services subcommittee on tactical air and land forces. “Six F/A-18 squadrons and four Harrier squadrons will basically cease flying operations. So half of our fleet.”

“We are going to have to shut down squadrons as well,” Miller said, without providing how many squadrons would be affected.

Earlier this month, the Pentagon unveiled a $30 billion supplemental budget request for 2017. Congress failed to pass the 2017 Defense Department budget last year, opting to pass a continuing resolution that only funded the government through the end of April, in order to give the administration of newly elected President Donald Trump an opportunity to shape defense spending.

Congress is still trying to pass the 2017 budget, and is not clear whether the $30 billion supplemental request will pass a deeply divided Congress. If lawmakers do not approve a spending plan, military operations would be funded at budget caps set at 2016 spending levels.

The Marine Corps has 20 tactical fighter squadrons, though the lack of funding for spare parts and other servicing has decreased the number of aircraft in each unit. More so, many aircraft are older, need maintenance more often and are not available for as many missions, Davis said. The impact also cuts deep into the number of hours that pilots can train.

In the F/A-18 Hornet fleet, “the average pilot in the Marine Corps flew 9.1 hours a month,” Davis said. “They are supposed to get 16 hours a month.”

The loss of the flight hours has secondary effects of making it more difficult to retain pilots, especially as a growing commercial aviation industry has offered lucrative signing bonuses to lure them away.

Davis said he is trying to retain the pilots through personal visits and reminders that if the United States is attacked, the Marines will respond, and will need its pilots.

“I appeal to their patriotism,” he said.

Miller said the Navy is already seeing the impact of the commercial industry hiring and the potential shut down of squadrons in the decreased number of junior officers accepting signing bonuses to extend their military flying commitment.

The acceptance rates “at the 04 ranks [lt. commander or major] is about 9 percent less than we were last year,” he said.