Maj. Brent Taylor, who was the mayor of North Ogden, Utah, leaves behind a wife and seven children. (UTAH NATIONAL GUARD) 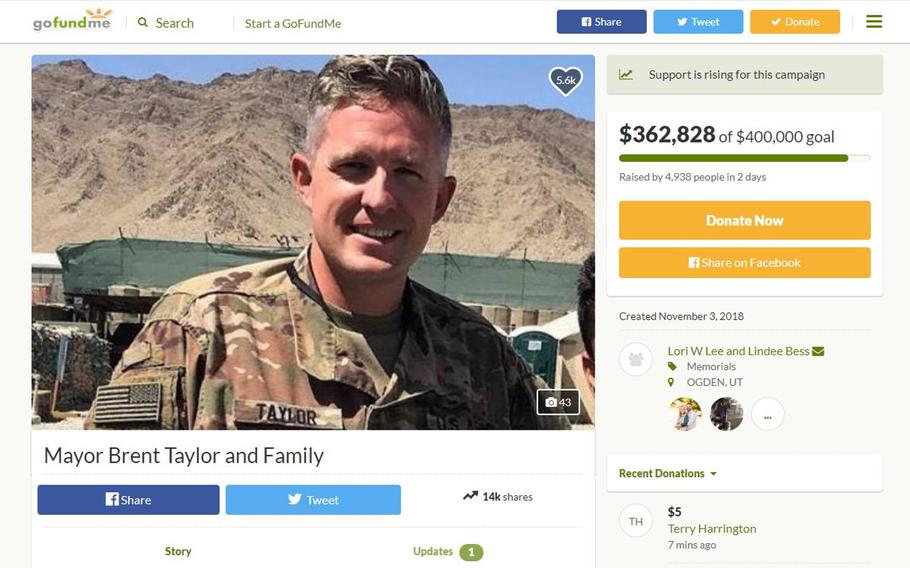 A fund drive for slain soldier Maj. Brent Taylor’s wife and seven children has raised close to $400,000 in two days.

More than 4,900 people have donated to a GoFundMe page, started by Lori W. Lee and Lindee Bess of Utah on Nov. 3.

Taylor, 39, a Utah National Guardsman training commandos in Afghanistan, was fatally shot on Nov. 3 by one of his Afghan trainees. He leaves behind his wife, Jennie, and their seven children, who range in age from 11 months to 13 years.

Taylor had taken a yearlong leave of absence as mayor of North Ogden, Utah, for his deployment to Afghanistan and was expected to return to his mayoral job in January.

The GoFundMe page sponsors called Taylor “a hero in every sense of the word.”

“At this time we cannot take away the loss for Jennie and his children but we can ease some of her financial burdens which will be with her for the rest of her life,” they wrote. “Knowing his family is being taken care of financially will matter to Brent. Please help us reach our goal, it is a lofty goal, but that is how our Mayor lived his life...setting lofty goals.”

Taylor served two tours in Iraq and was on his second tour in Afghanistan. He became the city’s mayor in 2013.

His family said they were heartbroken but had no regrets.

“When a man like Brent has the desire to bring freedom to others and to serve his country, and he gives his life to that cause, in our view, there’s not a whole lot of room for anger. We are so proud of the way he lived — proud of the way he gave his life,” Kristy Pack, Jennie Taylor’s sister, said Sunday.