Fun, not fear, on minds of most in Pacific as holiday weekend kicks off 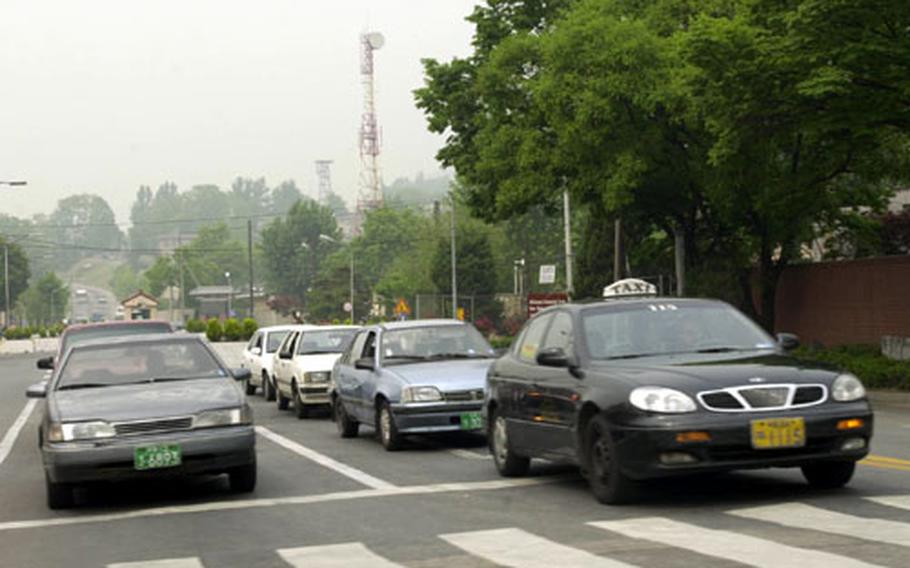 Cars are lined up outside the main gate of Yongsan Garrison&#39;s main post on Thursday. Although higher terrorism alerts have been issued, many servicemembers across the Pacific say they don&#39;t fear attacks. (Jeremy Kirk / S&S)

Despite a string of overseas bombings and a heightened terrorism alert level in the United States, most residents at U.S. bases in the Pacific say they are more worried about barbecues than bad guys.

A surge in communications intercepts, public statements attributed to senior al-Qaida leaders and recent attacks in Morocco and Saudi Arabia led the Homeland Security Department this week to issue an &#8220;orange alert,&#8221; the second-highest threat level.

According to The Associated Press, the Defense Intelligence Agency advised regional commanders and stateside military installations to raise their threat level from &#8220;significant&#8221; to &#8220;high,&#8221; the highest level in the DIA&#8217;s alert system.

U.S. military officials in the Pacific declined to comment on whether security was being increased at installations in the region, saying that bases were at &#8220;appropriate&#8221; force protection levels.

Officials have said that strikes on &#8220;soft targets&#8221; overseas &#8212; including shopping malls, restaurants and public gatherings &#8212; are more likely than large-scale attacks on American soil.

Many base residents said they&#8217;ve become used to heightened security and the possibility of an attack.

&#8220;Regardless of location, whether it be here or stateside, there is an element of risk present, and we are all susceptible to some sort of terrorist act,&#8221; said Sam Miller, Sasebo Naval Base Human Resources Office director.

&#8220;While the risk may be somewhat greater for those of us working and living on and around military installations, I think the security efforts at those installations have increased in proportion to the greater risk. I feel as safe in Japan as I would feel anywhere in the U.S.&#8221;

Jim Whalen, Sasebo&#8217;s safety manager, said he was confident in the anti-terrorism measures. &#8220;I feel personally safe working and living in Japan,&#8221; he said.

So does Theresa Wright, a fifth-grade teacher at E.J. King School in Sasebo.

&#8220;I am not fearful of the new developments around the world,&#8221; she said. &#8220;I feel very safe living and working in Japan. I also feel very safe on U.S. military installations. Our troops are doing their best in protecting Americans and our national interests.

Meanwhile, many in South Korea see terrorism as a secondary threat. Pfc. Antwon McAllister looks at it as a possibility but thinks the more tangible likelihood is an attack from North Korea.

Spc. Michael Grigsby agreed, saying he has no fears in South Korea and doesn&#8217;t see the worldwide threat as any worse now than it has been.

For Erik Edwards, the heightened terror threat in the United States affects him only if the military bases on Okinawa go into a state of heightened alert.

Edwards, married to a teacher, has lived on Okinawa since 1998.