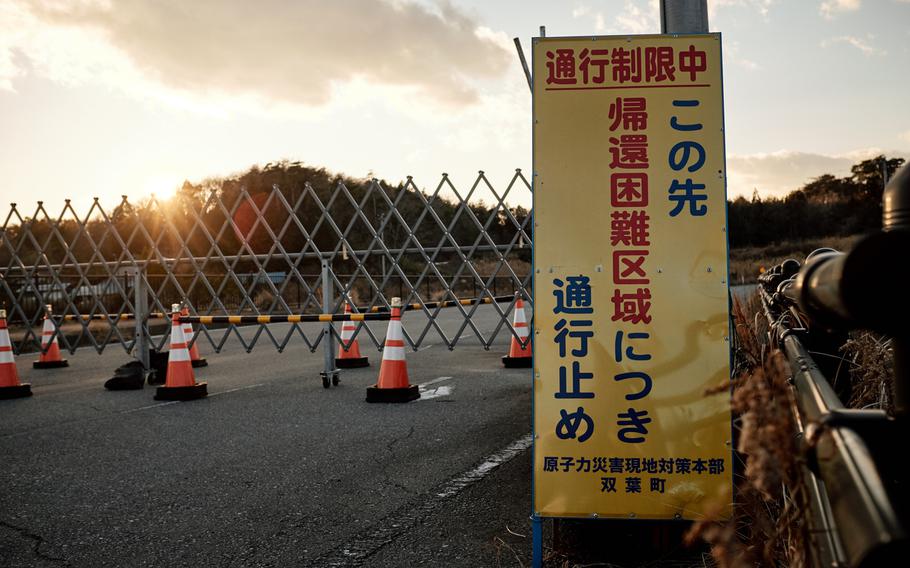 A sign that translates to "Road closed due to 'Difficult to return zone' ahead," sits in front of a barricaded road in the ghost town of Futaba, Japan, less than 10 miles from the severely damaged Fukushima Dai-ichi nuclear power plant Feb. 10, 2016. (James Kimber/Stars and Stripes) 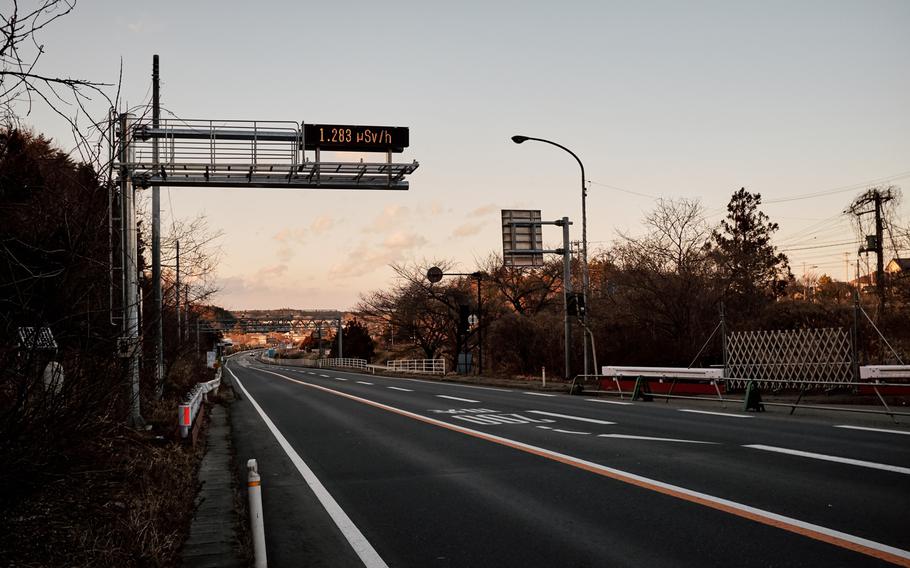 A road sign along the highway in the ghost town of Futaba, Japan, displays the current radiation level in the area, Feb. 10, 2016. This reading translates into roughly twice the normal amount of radiation a person would receive on a typical day. (James Kimber/Stars and Stripes) 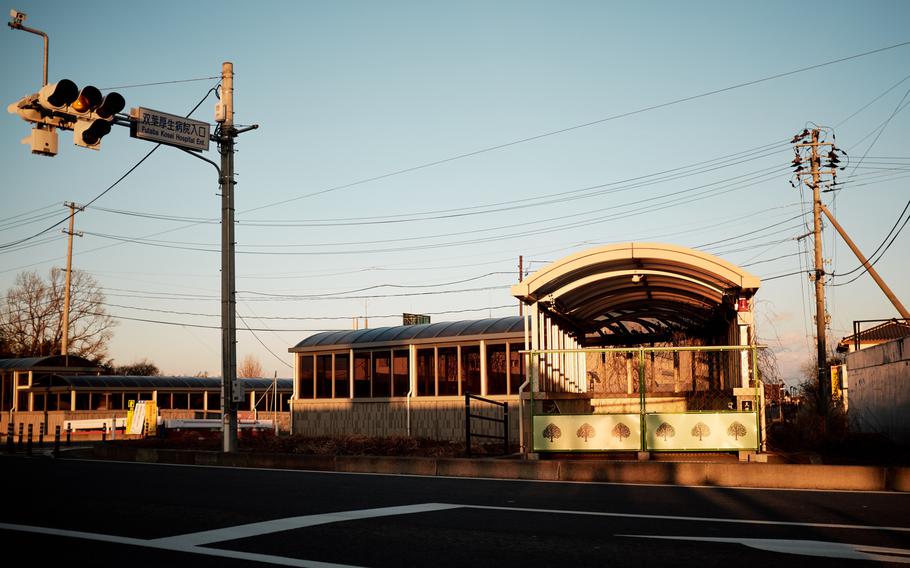 The entrance to an underground crosswalk leading to the abandoned Futaba Kosei Hospital in Futaba, Japan, remains barricaded Feb. 10, 2016. To keep people out, the fences in front of these pedestrian traffic areas are taller and sturdier than the typical barricades found along the highway. (James Kimber/Stars and Stripes) 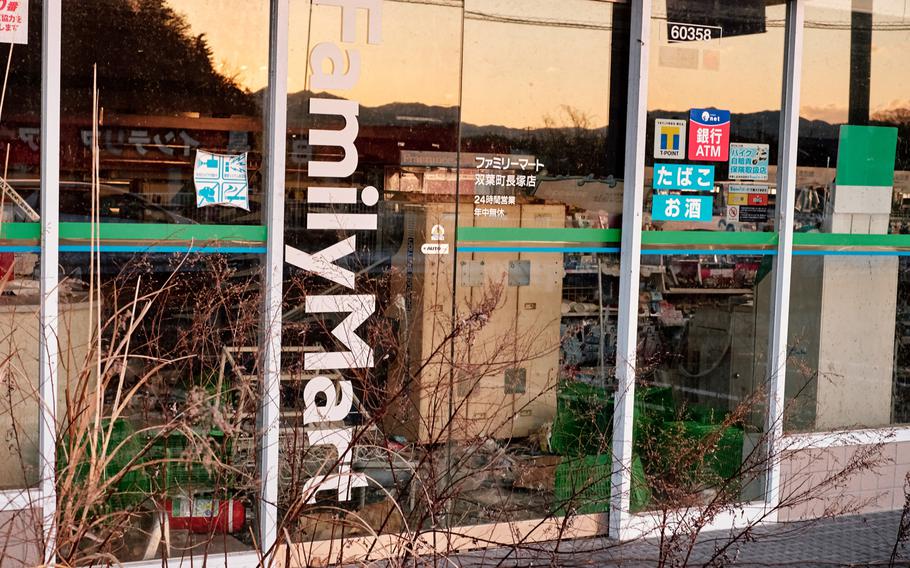 Stock can be seen through the windows of an abandoned convenience store along the highway in Futaba, Japan, Feb. 10, 2016. The store has remained vacant since the city was evacuated five years ago. (James Kimber/Stars and Stripes) 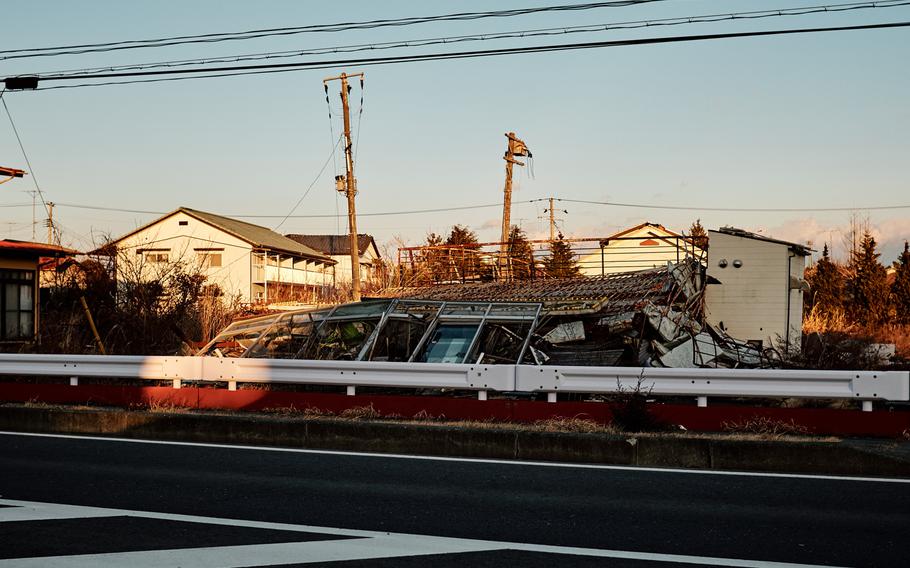 A collapsed building lays on the side of the highway in Futaba, Japan, Feb. 10, 2016. Many damaged buildings that remained standing after the 2011 earthquake have fallen from the years of neglect. (James Kimber/Stars and Stripes) 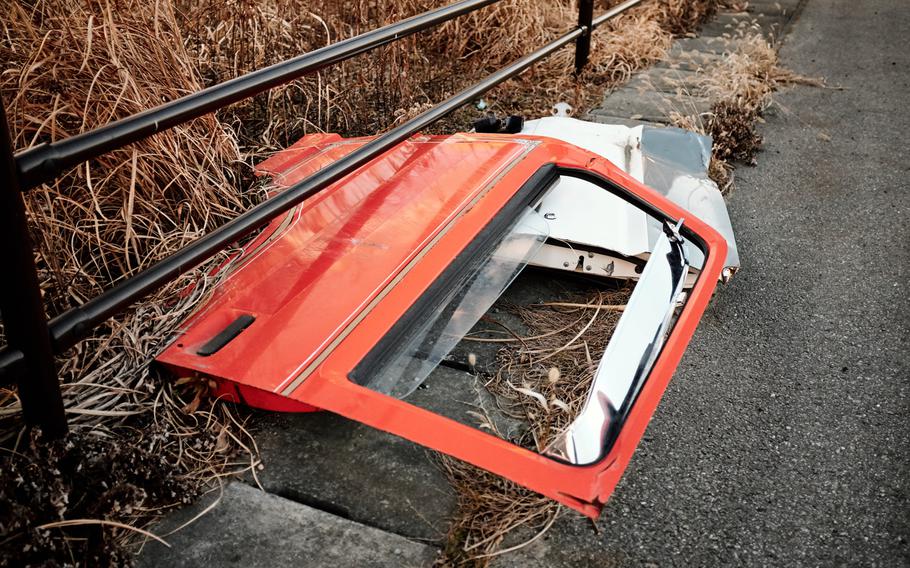 A car door is seen lying on a sidewalk off the highway in Futaba, Japan, Feb. 10, 2016. All of the town's 7,100 residents were evacuated in 2011 and haven't been allowed to return. (James Kimber/Stars and Stripes) An abandoned Idemitsu gas station franchise sits behind a barricade in the ghost town of Futaba, Japan, Feb. 10, 2016. The store has remained vacant since the city was evacuated five years ago. (James Kimber/Stars and Stripes) 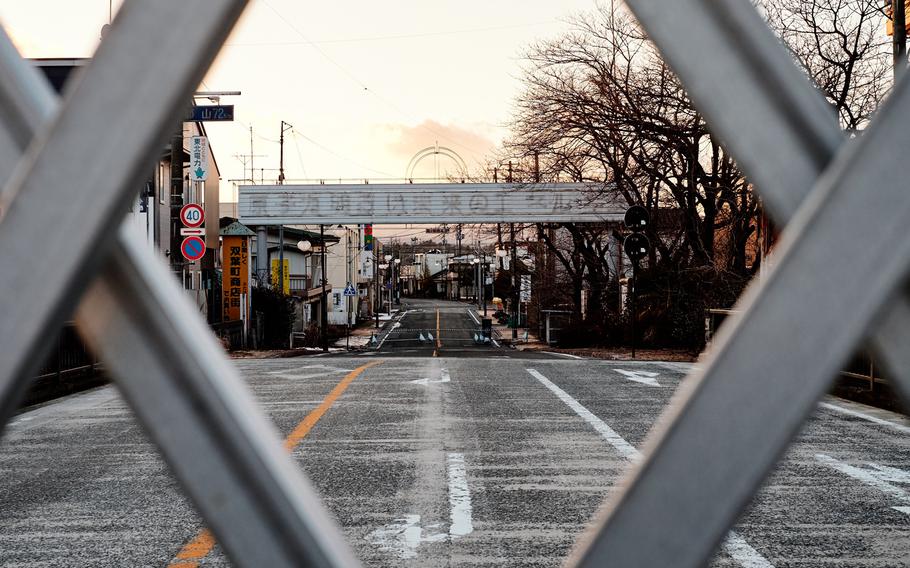 The remains of a sign reading ''Nuclear power: Energy for a bright future'' stands over the barricaded road along National Route 6 in the ghost town Futaba, Japan, less than 10 miles from the severely damaged Fukushima Dai-ichi nuclear power plant. The characters on the sign were removed in December due to deterioration. (James Kimber/Stars and Stripes) 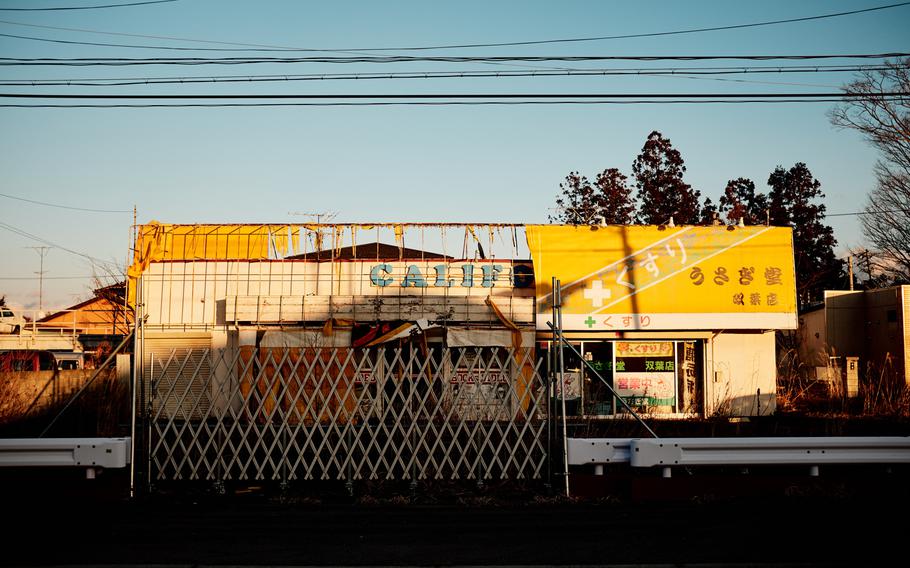 Much of the sign on an abandoned drug store has fallen, revealing part of the previous tenant's name in Futaba, Japan, near the severely damaged Fukushim Daiichi nuclear power plant, Feb 10, 2016. (James Kimber/Stars and Stripes) 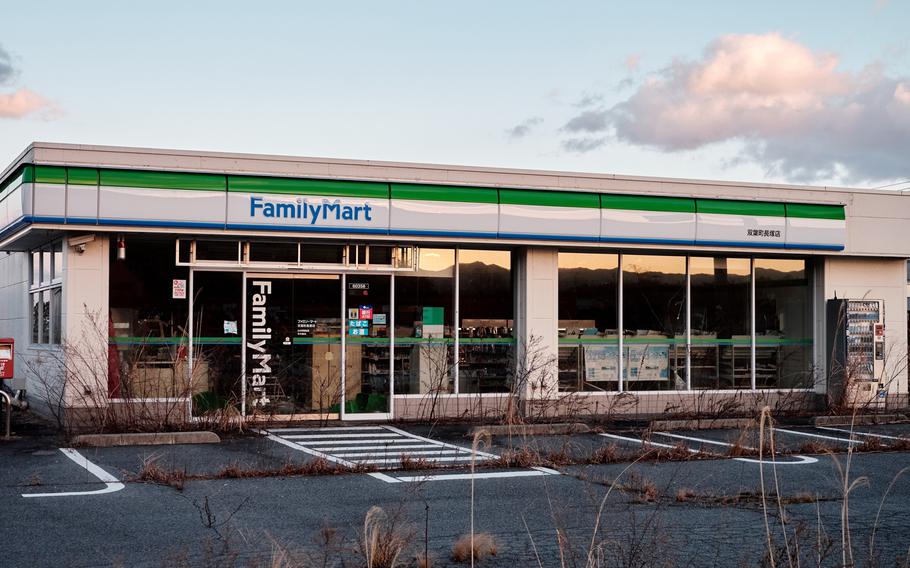 An abandoned convenience store along the highway in the ghost town of Futaba, Japan, Feb. 10, 2016, has remained vacant since the city was evacuated five years ago following the disaster at the Fukushima Dai-ichi nuclear power plant less than 10 miles up the road. (James Kimber/Stars and Stripes) 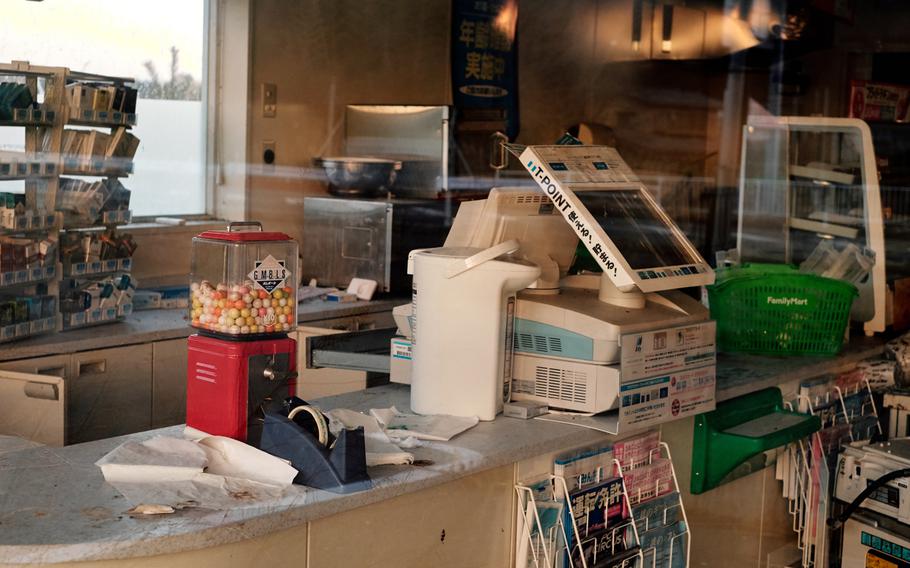 Cigarettes, gumballs and magazines are visible through the windows of an abandoned convenience store along the highway in Futaba, Japan, Feb. 10, 2016. The store has remained vacant since the city was evacuated five years ago. (James Kimber/Stars and Stripes) 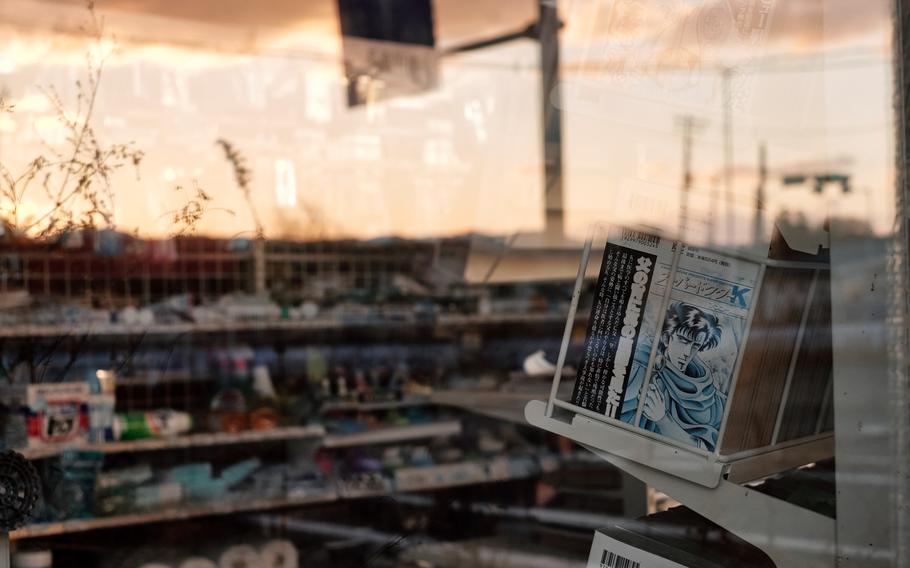 Stock still sits in an abandoned convenience store along the highway in Futaba, Japan, Feb. 10, 2016. No one has entered the building since the town's 7,100 residents evacuated five years ago. (James Kimber/Stars and Stripes) An independent convenience store sits abandoned next to a homemade goods shop behind the exclusion zone in the ghost town of Futaba, Japan, Feb. 10, 2016. The vending machines outside still have stock inside, though power hasn't been restored to the area. (James Kimber/Stars and Stripes)

TOKYO — The worst health effects of the 2011 Fukushima Dai-chi nuclear power plant meltdown aren’t coming from radiation — at least, not yet.

All of the Japanese government’s data indicates that the country’s food supply, which has been stringently tested for radiation since the disaster, is safe.

The air in most of Fukushima shows low radiation readings, and farther away in cities like Tokyo, background levels are naturally lower than many European cities.

The water nearby the plant and along parts of the Fukushima coast is highly radioactive, as roughly 300 tons of seawater each day have washed through the plant for years. Scientists say that the water elsewhere is safe, and fears of widespread contamination tend to discount the size of the Pacific Ocean.

However, all of this data only matters if people trust that their government is taking the right courses of action — and when it comes to trust, officials admit that government at most levels hasn’t regained what was lost in 2011.

The government was “unable to take sufficient measures in such issues … and as a result, the residents developed a sense of mistrust — this was the reality,” Fukushima Prefecture Gov. Masao Uchibori said in response to a Stars and Stripes question at a Tokyo press conference.

“What the government and municipalities have to do is to carry out the reconstruction policy soundly, to faithfully disclose information in various ways and to continue making efforts to gradually gain the trust of the residents.”

Japanese citizens ranked as the most distrustful of government, business, media and nongovernmental organizations, according to a 2016 annual ranking of 27 countries by the Edelman marketing firm.

Prior to the earthquake, they were considered neutral or trustful in several of the survey’s metrics; 63 percent said they trusted government spokespeople, compared with 8 percent the following year.

The breach of trust over the health consequences of the reactor meltdown has its roots in childhood for many Japanese people.

Schools taught for decades that nuclear power was not only safe, but a point of pride for the nation.

In Futaba, a few miles from the Fukushima Dai-ichi plant, faded characters over a bridge declare nuclear power the “energy for a brighter future.”

A sign placed nearby after the meltdown reads, “Remember our folly.”

Following the disaster, the levels of government failed to communicate, and then-Prime Minister Naoto Kan complained during a news conference that he couldn’t get Tokyo Electric Power Co., the plant’s operator, to talk to him.

As a result, many Fukushima residents ended up evacuating directly into the path of a radioactive plume.

Meanwhile, most of the radiation treatment facilities were clustered within the evacuation zone around the plant and had to be abandoned, which overwhelmed hospitals further away.

About 50 people died after being evacuated from Fukushima Prefecture nursing homes from dehydration and lack of the most basic care, according to Koichi Tanigawa, a Fukushima Medical University researcher who later published his findings in the Lancet medical journal.

About 2,700 people died in shelters by March 2013, and during the first three months after the disaster, they died at rates 2-3 times higher than normal for Japan, according to Tanigawa.

These are the memories that residents of the disaster-affected areas carry with them when they decide whether to trust the government’s statements that their food is healthy.

Residents who spoke with Stars and Stripes about food safety questioned whether the government would admit it if food was unsafe.

Fukushima Prefecture produce carries a stigma for some, despite marketing campaigns to overcome it. It rejects food at a far more stringent rate than most countries, including the United States.

Every bag of Fukushima rice is individually inspected — 10.3 million bags in April-December 2015, with none exceeding safety limits, according to government figures. Of 7,119 lots of seafood inspected, only seven exceeded radiation limits.

Many in the region have gone back to eating local food, and some are encouraged enough by the inspections that they prefer it over other areas.

Hiromi Hayashi, of tsunami-damaged Miyagi Prefecture, north of Fukushima Prefecture, checks where her vegetables are grown before buying them.

If they’re from parts of the northern Kanto area, which showed elevated radiation readings after the disaster, she is hesitant to buy them.

“I have a baby, so I can’t say that I don’t have concerns,” said Hayashi, while watching her 11-month-old boy, Shizuku.

“At the moment, high school students at Fukushima do not suffer from significantly higher levels of radiation,” said Ryugo Hagano, a Tokyo University physics professor who tracked Fukushima Prefecture students with dosimeters, then compared them with students in Japan and in Europe.

A study by Okayama University professor Toshihide Tsuda alarmed many last October when he stated that thyroid cancer appeared 20 to 50 times higher than expected in the prefecture. However, the study results have been an outlier thus far, and multiple peers have questioned the study’s methodology.

Data from the Hiroshima and Nagasaki atomic bomb explosions indicates that 100 millisieverts of exposure carry a likelihood of developing radiation-related cancer, Tanigawa said.

During the disaster, 173 nuclear plant workers were exposed beyond 100 millisieverts, he added. The first case of a plant worker diagnosed with radiation-related leukemia was reported in October. Japan’s health ministry approved compensation for the worker, a man in his 30s, according to Japanese broadcaster NHK.

Tanigawa’s study found that radiation doses received in Fukushima were generally below one millisievert.

His research indicates that radiation is fairly low on the list of acute health threats to Fukushima’s population. Diabetes and other ailments related to lifestyle changes have increased above national averages. So have post-traumatic stress and mental health disorders, along with suicides.

However, he and other scientists — whose opinions on radioactive health risk often vary considerably — aren’t ready to rule out radiation as a health concern just yet.

Most epidemiologists view low-level radiation exposure as a very low health risk — after all, it exists throughout nature.

However, some scientists specializing in radiation hygiene and other disciplines counter that there is no “safe level” or threshold for radiation exposure, and that different isotopes may cause different reactions among humans.

For example, a 2015 Colorado State University study noted that radiation levels dropped rapidly and likely left low health risk to the food supply — but they also noted that little attention has been paid to strontium-90, a less abundant but longer-lasting isotope found at the site.

Even scientists like Tanigawa, who view disaster-related thyroid cancer as unlikely, agree that further study and monitoring is needed.

“We are still surrounded by various health affecting factors … that could be potential causes for cancers in the future,” Tanigawa said. “We’ll need to have much longer term investigation survey to determine whether it is case or not, so we need to be very cautious about the [current] results.”