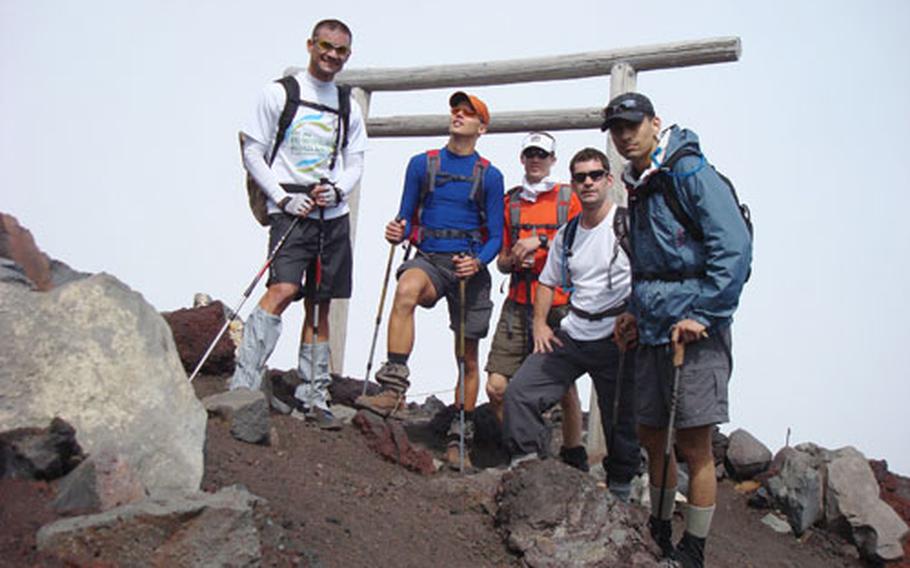 Yokosuka Naval Base, Japan, climbers Mike Raney, Luke Nelson, Justin Hoff, Doug Szwarc and Rob Lovern tackled Mount Fuji on Labor Day with the intention of climbing Japan&#39;s tallest mountain four times in 24 hours. All, with the exception of Lovern who climbed three times with hurt feet, made the climbs in 22 hours to raise money for charity. (Photo courtesy of Doug Szwarc)

YOKOSUKA NAVAL BASE, Japan &#8212; Many celebrate Labor Day with a long weekend and a cookout.

Five men from Yokosuka instead opted to put the "labor" back into the holiday by climbing Japan&#8217;s highest mountain four times in a row.

The "four in 24" challenge was a success, the climbers reported this week. They trekked to the top of Mount Fuji four times in a total of 22 hours and raised $10,935 for charity.

"By the end of it, we were almost laughing from the pain," said Lt. Doug Szwarc who coordinated this year&#8217;s climb after a triple summit feat up and down the 12,388-foot volcanic peak in 2007. Even on Thursday, stepping up stairs was "not the most fun," Szwarc said.

All, with the exception of Lovern, whose injured feet caused him to miss the last climb, logged a grand tally of 20,000 feet up and 20,000 feet down the mountain.

Besides altitude and sore muscles, challenges included the mental weariness of "losing each other in the fog" and navigating around tourists on steep, rocky passages, Szwarc said.

They also took the first climb too fast &#8212; completing the round trip in less than 3 1/2 hours &#8212; making the second ascent hardest of all for him, Szwarc said.

"The second climb was most difficult because we weren&#8217;t at the halfway point yet," Szwarc said.

"For me, the most difficult part of the climb was being awake for over 24 hours," said Raney, calling the climb "an ugly slice of reality."

"I train to run marathons and consider myself to be about as fit as a 38-year-old can be," he added, "but death-marching up a steep mountain and then stumbling back down for hours on end was physically and mentally draining."

The addition of iPods, however, made everyone feel better on the third run, Szwarc said. And the last climb "was just about putting one foot in front of the other."

The money raised will be split between the Japan-based Shunkou Gakuen Orphanage and Guardian Ad Litem organization in South Carolina, Szwarc said. Guardian Ad Litem, which helps children in cases of abuse or neglect, will get a check, but donors will vote on the gifts purchased for the orphanage through the climbers&#8217; Web site, Szwarc said.

The Web site, www.fujiclimb.com, also has a video of the climb.

Because the group upped the ante each year in the number of climbs, Szwarc said that Hoff is talking about "five times in 25 hours" for 2009.

But count Szwarc out.