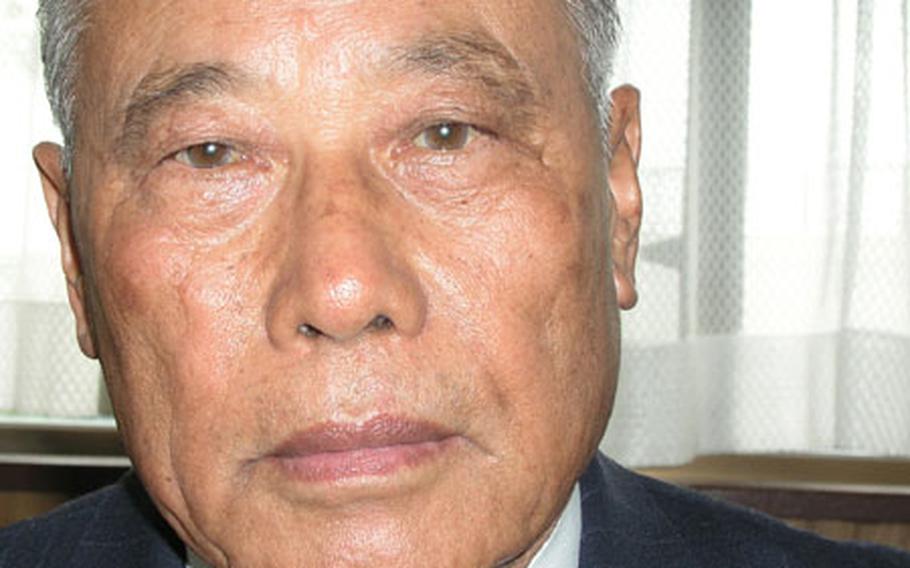 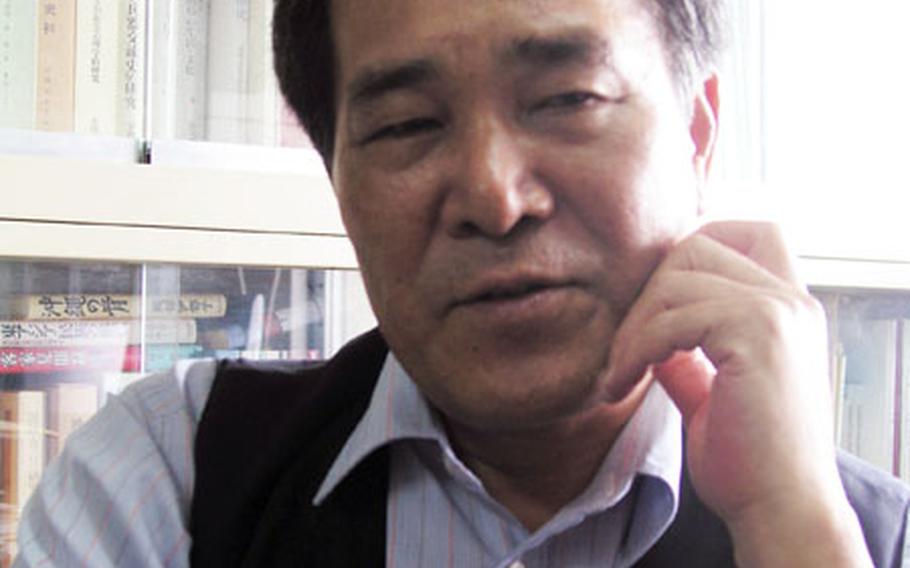 Kurayoshi Takara, a history professor at the University of the Ryukyus, is a member of a study group formed last April by U.S. and Japanese scholars and political analysts who propose to temporarily move flight activities at Futenma Marine Corps Air Station to other existing military installations, such as Camp Schwab, Camp Hansen, or Kadena Air Base, until completion of a new airport at Henoko. (Chiyomi Sumida / S&S)

CAMP FOSTER, Okinawa &#8212; Okinawans are becoming increasingly impatient with the progress of replacing the Futenma Marine Corps Air Station with a new base in northeast Okinawa.

Although the United States and Japan agreed in December 1996 to close Futenma MCAS within five to seven years, once &#8220;adequate replacement facilities are completed,&#8221; and a sea-based facility later was approved for the waters off the village of Henoko, there is little sign the new base ever will be built, critics of the project claim.

At the moment an environmental study is being conducted on the reef and waters for an airport to be built on reclaimed land about two miles off shore. The new base is to be connected to the Marines&#8217; Camp Schwab and also will be used for civilian aircraft.

Environmental activists oppose construction of the airport because the waters are the northernmost feeding grounds of the rare dugongs, a saltwater manatee. They claim the base would threaten the existence of the mammal and could further damage live coral already dying from the runoff of red soil from pineapple farms.

&#8220;The current plan to move the air station operations to Henoko would never be realized,&#8221; said Norio Ota, former chairman of the Okinawa City Chamber of Commerce. &#8220;It is absolutely impossible and unrealistic.&#8221;

Ota recently wrote an article in the Okinawa American Chamber of Commerce magazine, &#8220;Amcham Okinawa Colleague,&#8221; presenting an alternate plan for the relocation of Futenma MCAS.

He said the current plan for a base off Henoko does not address the needs for support services, including housing. The closest military housing area is at Camp Courtney, nearly an hour away. And most of the personnel with families now assigned to Futenma actually live on Camp Kinser, the southernmost U.S. Marine base.

A commute from there would take more than 90 minutes, Ota said.

&#8220;One of the biggest issues that has never been discussed or considered was the additional land space needed for support services,&#8221; Ota said. &#8220;If the Marine Corps operations are moved to Henoko, servicemembers and their families would need to move into the area.&#8221;

He said that the housing area alone would meet stiff resistance by the local community.

&#8220;Clearly it is impossible to secure such a large amount of land in the neighborhood,&#8221; he said. &#8220;No matter how they would do it, the Henoko plan is destined to meet a deadlock.

As an alternative, Ota refloated a plan considered and abandoned years ago to instead build a replacement facility off Okinawa&#8217;s Yokatsu peninsula. The U.S. Navy&#8217;s White port at White Beach is located at the foot of the peninsula and nearby Tsuken Island would be an ideal location for the airport, he contended.

He said the area is large enough to also facilitate the move of the Japan Air Self-Defense Force from its base adjacent to busy Naha International Airport.

&#8220;By reclaiming approximately 1,389 acres of ocean, the land can be used for consolidated military installations,&#8221; he said. And, he added, no one would have to worry about environmental issues.

The area&#8217;s coral reef was destroyed three decades ago by a landfill project that turned nearby Henza Island into a petroleum storage base.

Kurayoshi Takara, professor of history at the University of the Ryukyus, says the Henoko project is a decade or more from completion, even if it succeeds in overcoming opposition by environmental and anti-base groups.

Something must be done sooner than that, he argued recently from his school office in Nishihara. Takara is part of an independent 11-member study team of U.S. and Japanese college professors, political analysts and researchers formed last year to study the issue.

&#8220;Our shared understanding is the importance of U.S.- Japan alliance,&#8221; he said. &#8220;For the stability and preservation of the relationship, we cannot walk around the military related problems exist on Okinawa, including closure of Futenma. The present situation surrounding the relocation is too far behind schedule. No one knows how many more years this would take.

&#8220;Meanwhile, should any aircraft accident occur while the air station continues to sit in the middle of Ginowan city, it would gravely damage the stability of the bilateral alliance,&#8221; he said.

His group has suggested temporarily moving flight activities from Futenma to existing military bases on Okinawa, particularly Kadena Air Base and the northern Marine bases.

&#8220;This is a temporary measure to disperse danger until the airport at Henoko is completed,&#8221; he said.

U.S. officials repeatedly have declined to comment on the Henoko project, contending the issue of how to replace Futenma MCAS is something to be worked out between Okinawa and the central government in Tokyo.

However, former assistant secretary of Defense Kurt Campbell recently told the Okinawa Times that the Henoko project was hopelessly stalled.

Campbell was a chief negotiator for the U.S. on the bilateral Special Action Committee on Okinawa that came up with the idea to close Futenma as part of a plan to reduce the land area on Okinawa taken up by U.S. bases by 21 percent.

Campbell said he favors a move of Marine air operations to existing bases.

In the meantime, the Defense Facilities Administration Agency announced Wednesday that it would announce by the end of the month how it will proceed with the next round of environmental assessments of the Henoko area.

Actual construction is still a decade away, said Takuo Mori, chief of the working team of the agency&#8217;s Futenma Relocation Headquarters.

&#8220;After all the necessary preparation phases are over, the actual construction of the airport is estimated to take nine-and-a-half years to complete,&#8221; he said.

&#8220;Based on the master plan drawn two years ago, we are moving forward,&#8221; he said. &#8220;There is no change in our stance in this regard. The ultimate purpose of all this is to close Futenma, which is located in the center of a heavily populated city, posing potential danger.

&#8220;To respond to the voices of the Okinawa people calling for the return of the air station, we are making our best effort to realize the return at earliest possible time,&#8221; he said.

Ota, on the other hand, said a decade is too long to wait. He said a facility could be constructed on Tsuken Island within six years and would cost less than the Henoko project.