Frustrated spouses struggle to find jobs in the Far East 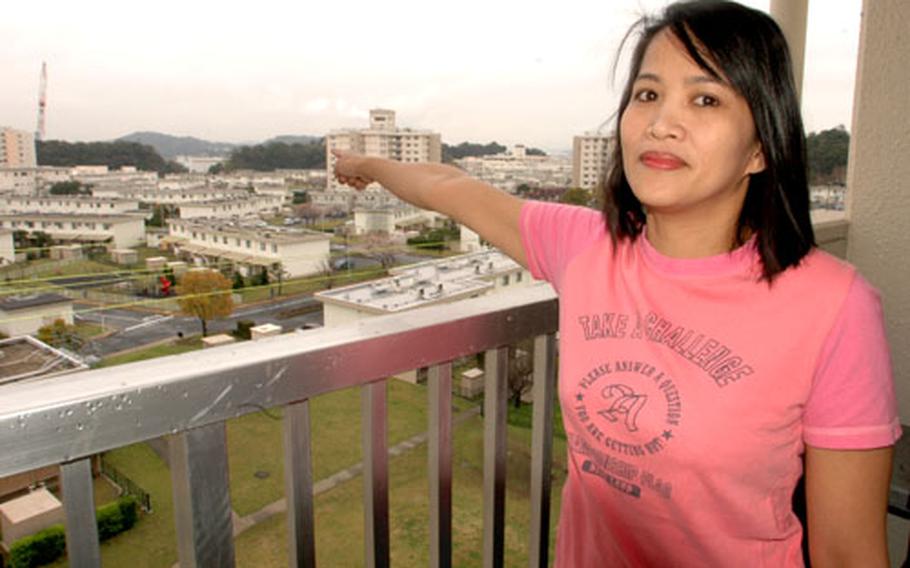 Ellen Angeles, on her Yokosuka Naval Base apartment balcony, points to the Naval Facilities Engineering Command, where she hopes to some day find work as an engineer. (Chris Fowler / S&S)

YOKOSUKA NAVAL BASE, Japan &#8212; Ellen Angeles says she is used to starting at the bottom.

But with a bachelor&#8217;s degree in civil engineering and the Naval Facilities Engineering Command clearly visible through her new apartment&#8217;s window, she was cautiously optimistic about landing a job when her husband took orders to a 7th Fleet ship.

Yet after more than seven months of knocking on doors, submitting applications and sending a letter to Commander, Naval Forces Japan Rear Adm. James Kelly and other high-ranking officers, Angeles is still unemployed.

She is one of many who left behind professional careers when they moved to another duty station with their active-duty spouse.

Unemployed and alone when their spouses deploy, they say their lives are being stunted.

&#8220;How can anyone expect professionals to work at MWR or the exchange for a salary that is much less than even half of an entry-level position in my field?&#8221; Angeles asked as she sat at the kitchen table of her meticulously kept home.

Behind her, an aerial photograph of a housing complex she designed back in Texas hung on the wall. As the designer, two of many neatly arranged cul-de-sacs bear the names of her children.

Throughout housing at Yokosuka Naval Base, other professional spouses are finding similarly bleak prospects.

Despite having a bachelor&#8217;s degree in business administration, Ramirez has begun applying for positions in her career field several pay grades lower in hopes of at least continuing Civil Service employment.

So far the well appears dry.

But what about jobs outside her career field?

She said she desperately wants to work, but if she accepts another full-time job, even in retail, it will void her spouse preferential employment eligibility to compete for a job in her career field.

For those looking for work in the local community, organizations like the Navy Fleet and Family Support Center offer area-tailored employment assistance programs. But the market is tough.

&#8220;Outside that gate, they don&#8217;t speak English,&#8221; said Bob Long, Yokosuka&#8217;s family employment readiness program manager. &#8220;Positions are limited, and for the professionals the prospects are scarce. After several rejections, people can get depressed.

While nursing jobs are easy to find in the United States, Long said he knows of a nurse in Japan who cannot find a steady job.

&#8220;A Navy captain e-mailed me back regarding the letter that I wrote to the admiral. He said that a position might open up in a few weeks,&#8221; she said.

Unemployment benefits come after a battle