From Vietnam to Iraq, pilot has a knack for close calls 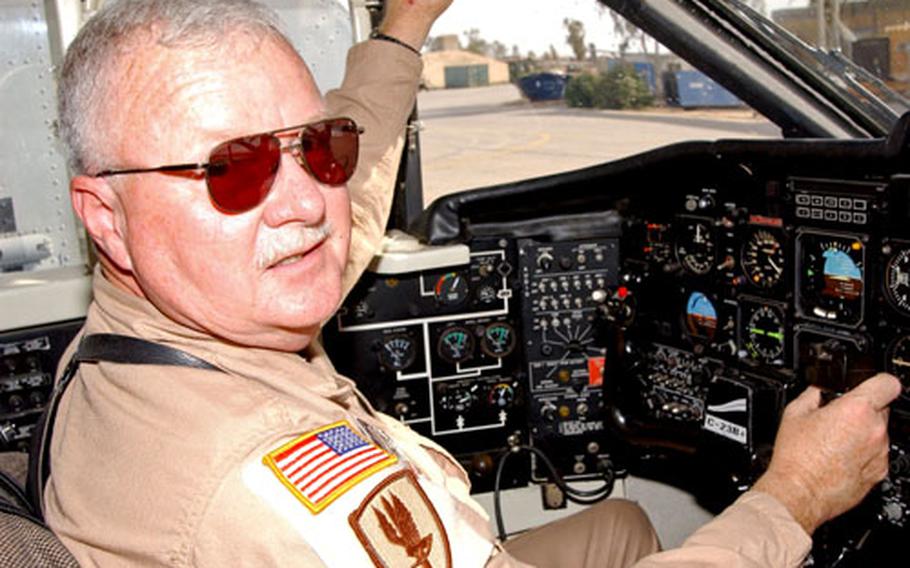 Chief Warrant Officer 5 Gregory McManus, a test pilot with the 135th Aviation Regiment in Iraq, has 39 years of flying with the Army under his belt. The Springfield, Mo., pilot flew helicopters in Vietnam from 1969 to 1970, during which he was shot down six times, he said. (Jeff Schogol / S&S)

CAMP ANACONDA, Iraq &#8212; His navigation systems had failed. Visibility was limited. And he could be heading toward the Iranian border.

Chief Warrant Officer 5 Gregory McManus, a test pilot with the 135th Aviation Regiment, said he wondered if he was about to end his 39-year career flying with the Army as the first American pilot shot down in Iran.

The Springfield, Mo., man was a full-time pilot again after several years in the Missouri National Guard and one tour in Vietnam on active duty.

McManus is modest about how he was able to land his plane without navigation systems.

&#8220;I just climbed up until somebody saw me on radar and told me where I was. I told them where I wanted to go and they gave me a direction and I flew that way until I got to where I think we were and landed uneventfully,&#8221; he said.

But his battalion commander gives him more credit for being able to get the stricken plane on the ground safely.

McManus was able to navigate the plane to safety using only a map, clock and compass, a method known as &#8220;dead-reckoning,&#8221; said Lt. Col. Mark McLemore, commander of the 3rd Battalion, 135th Aviation Regiment.

McLemore said McManus&#8217; level of experience has been invaluable to other pilots, who turn to McManus for advice.

McManus joined the Army in 1967 and flew helicopters in Vietnam from 1969 to 1970, during which he was shot down six times, he said.

McManus said he was awarded the Distinguished Flying Cross after his gunship came upon an enemy regiment on the Cambodian border.

His helicopter took fire from all directions, but he and his crew used every weapon they had until they ran out of ammunition, he said.

&#8220;We ran out of rockets and machine-gun [bullets] first, and then the door gunners ran out of their ammo. I shot all my pistols and dumped everything else, threw all the grenades overboard at them. If there was anything on the aircraft, I would have thrown boxes of crud on them but I didn&#8217;t have anything else,&#8221; he said.

One media report put the enemy dead at 142, but Stars and Stripes reported at the time that 35 enemy were killed, McManus said.

McManus went into the restaurant business when he got back home, but he kept flying with the National Guard, he said.

For the past four months he has flown transport airplanes fast and low over Iraq, he said.

In some ways, Iraq and Vietnam are very different wars, McManus said. For example, U.S. troops now have instant communication with the outside world, he said.

But in Iraq, as in Vietnam, McManus will look out of his aircraft and see people dressed in black, wearing &#8220;strange hats&#8221; and working in the fields to support their families, who wave as he flies by, he said.