From the S&S archives: Will the real Kojak please stand up? 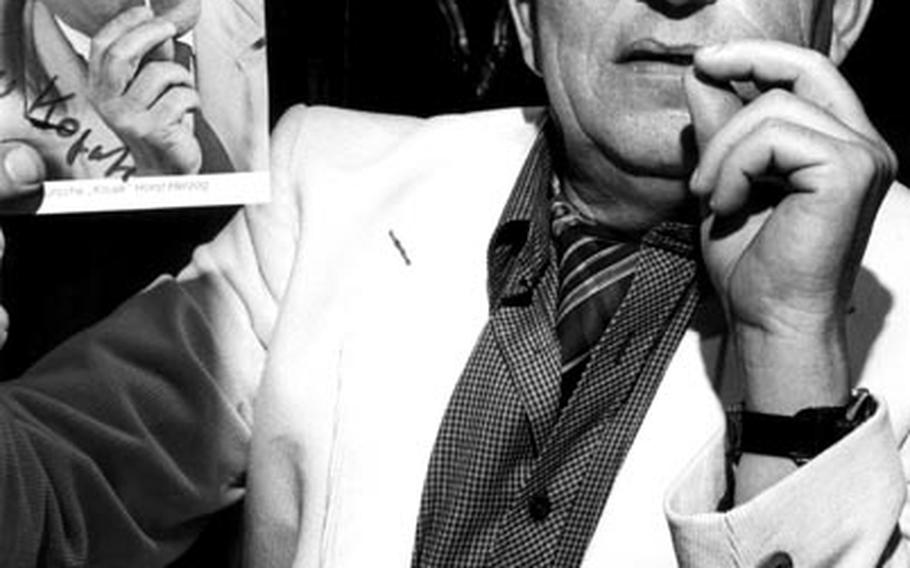 MANNHEIM. Germany &#8212; An MP sergeant who, "in all good faith," gave a ride to visiting TV cop "Kojak" here Saturday claims it&#39;s the MPs who got taken for the ride.

Sgt. 1C. Martin Rook discovered he hadn&#39;t chauffeured Telly Savalas, star of the American television series about a New York City cop &#8212; as he&#39;d been led to believe. Instead, he and other MPs had rolled out the carpet for Horst Herzog, a German Insurance agent and Savalas&#39; lollipop-licking image.

Unfortunately for Rook and fellow white-gloved MPs, the discovery came after they had delivered &#8212; with sirens screeching &#8212; the counterfeit Kojak to a crowd of American fans at Benjamin Franklin Village.

"Look, if I had been told this was not the real Kojak, I never would have gotten involved," said Rook, soured by what he called "deliberate deception" by Herzog&#39;s promoters.

Book said Robert G. Washington, an American publicity agent, asked him on Thursday to pick up Kojak in an MP sedan at the train station in Heidelberg Saturday morning and accompany him on several area appearances.

"The idea here was a traditional American policeman being supported by American police in Germany. I agreed to act it up, but only if Savalas would stop by the MP station and sign a few autographs, which Washington said he&#39;d do," Rook said, adding, "I thought it would be nice, what with it being Armed Forces Day and all."

Washington, an ex-soldier who has lived here since 1945, denied he tried to con the MPs, but "took it at face value" when Uwe Herder, a young German promoter from Weinheim, told him about the Kojak visit and asked his help in getting the American MPs involved.

"I feel like I&#39;ve been used. I never would have approached the Americans if I had known this wasn&#39;t the real Kojak," Washington said. He said Herder "just crawled too far out on a limb to come back in" once the Americans got involved and interest began to accelerate.

Washington added: "You read about those millionaires buying those fake paintings. Well. that&#39;s what I did &#8212; I bought the fake picture Herder painted me."

But Herder claims he never tried to pass Herzog off as the real McCoy to Washington, Rook or anyone else. "I told him it was the German Kojak," said Herder, who blamed the misunderstanding on lack of communication.

Washington, whose German is fluent, doubts that&#39;s the case.

"When I specifically asked Herder if Kojak could speak German. he replied, &#39;a little.&#39;"

As it turned out, the Americans heard Kojak utter neither German nor English. According to Herder, Kojak couldn&#39;t talk Saturday afternoon because of a bad sore throat and a cold caught during an appearance in Basel, Switzerland.

But Saturday night at the Cafe-Bar "Y" here. Kojak chatted in German to autograph seekers, signing Theo Kojak on color photos under which was printed "Der Deutsche &#39;Kojak&#39; Horst Herzog."

Although Herzog has made several TV and personal appearances in Germany, he stressed it&#39;s his insurance business in Bielefeld that pays the rent.

"Of course business is much better since I&#39;ve become the German Kojak." he said.

His conversion to Kojak came in late 1976, when he shaved his head in answer to a 300-mark bet made over a few beers with friends. Their astonishment at how much he looked like Savalas, whose show is popular in Germany, encouraged him to capitalize on the likeness, he said,

"I really like the Kojak character and would never want to put him in a bad light," Herzog said. "I also like the Americans I met today and didn&#39;t want to hurt them." He added, "Things got out of hand because he (Herder) wanted a little more publicity out of this than I did."

Herzog, who is usually his own agent, said this was his first dealing with Herder.

And Rook? Rook is just sorry he ever got involved.