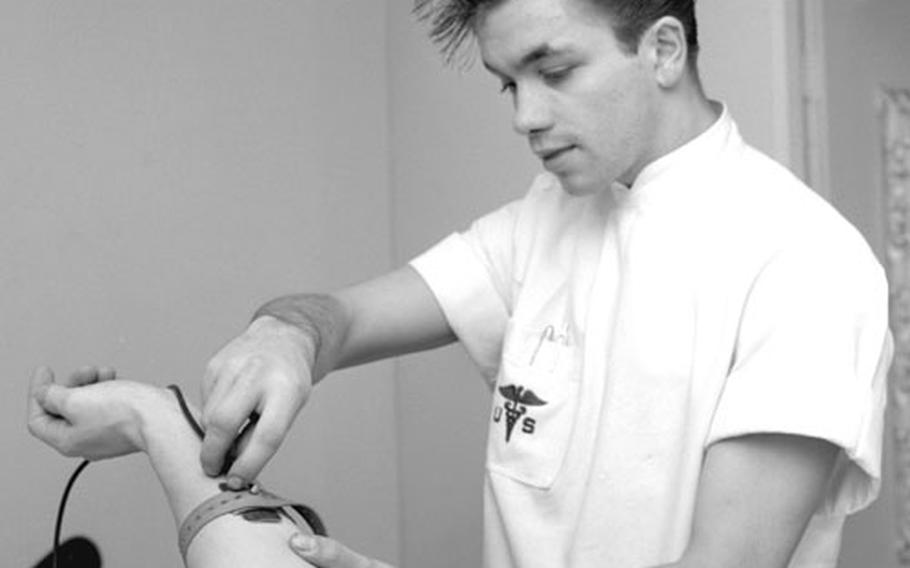 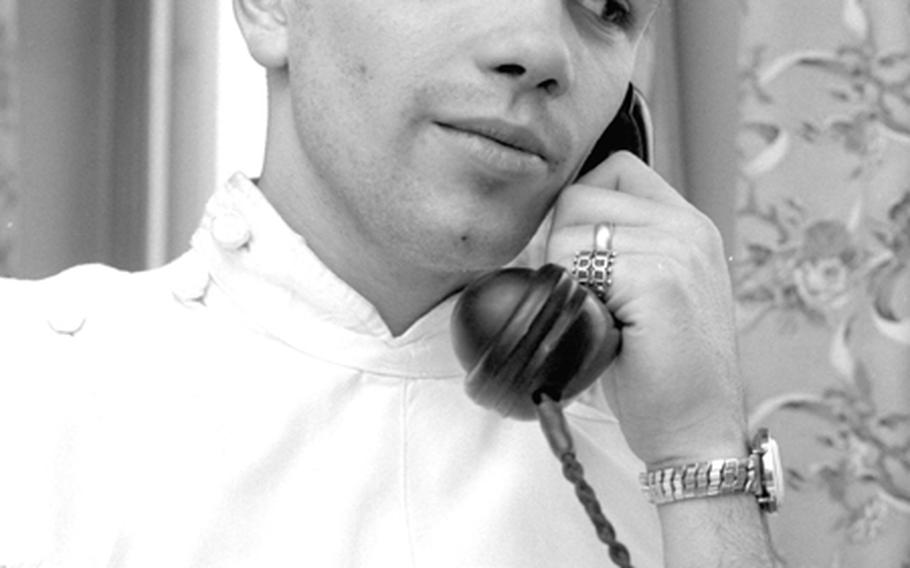 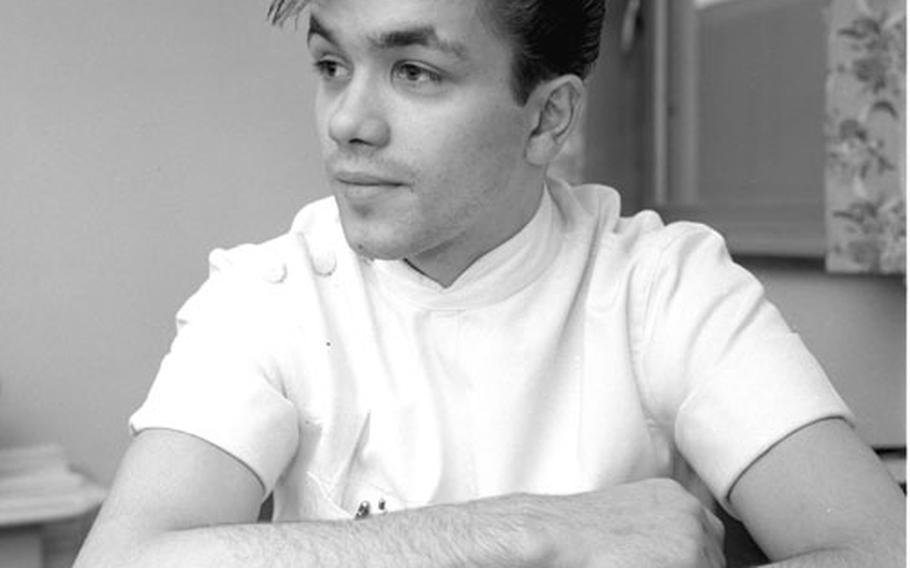 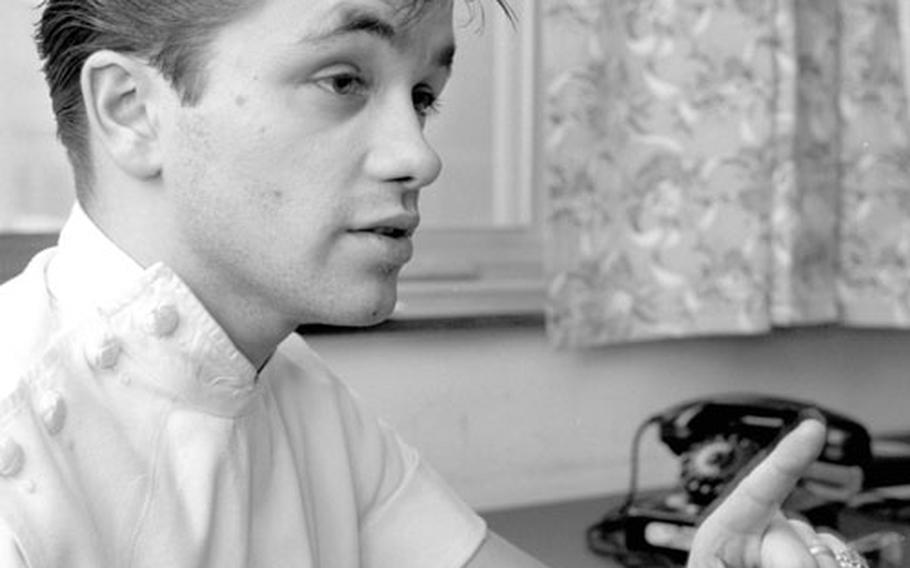 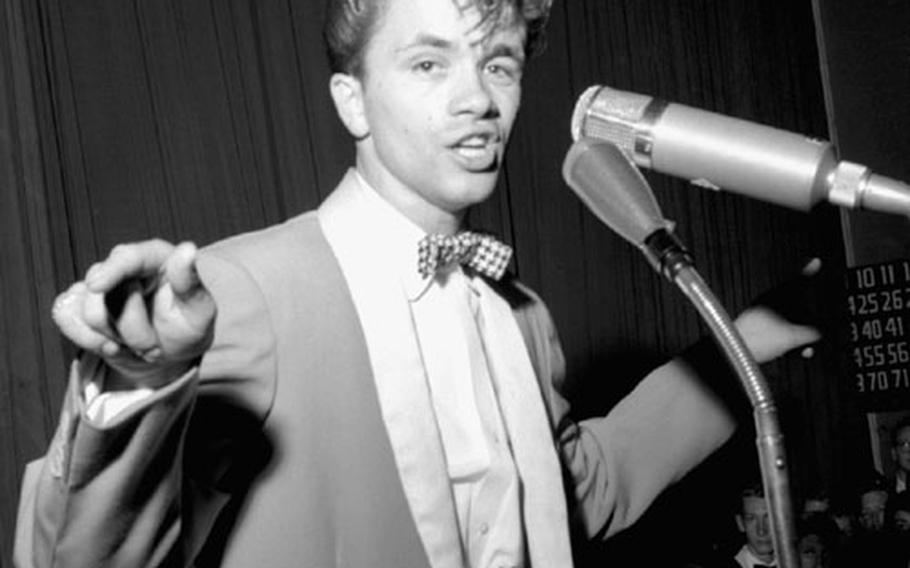 Buy Photo
... and onstage at the Frankfurt Casino in August, 1959. (Gus Schuettler / ©Stars and Stripes)

AIRMAN 2C Gus Backus will never forget get the night he sang on the Ed Sullivan TV show in New York &#8212; he had to rush back to Pittsburgh in time for KP at 5 the following morning.

But the 21-year-old rock &#39;n&#39; roll star survived this and numerous other potentially traumatic experiences stemming from combining show business with military duty.

Since entering the Air Force in August of 1957, he has made numerous records with the Del Vikings quintet, including "Come Go With Me" that sold more than a million copies; appeared in the American movie "The Big Beat" ("I hear it was a real nothin&#39; movie"); taken part in numerous military shows; and picked up quite a bit of extra coin.

But it was after coming to Germany that he really branched out. In recent months he has made four records in German,. including one long-play, taken part in two German movies, and performed at rock &#39;n&#39; roll shows such as the recent one in Vienna that pulled a crowd of 14,000.

All this had been sandwiched in between his regular duties as a medical technician at the Wiesbaden, Germany, Air Force Hospital. His primary job is to take cardiograms of persons suffering from rock &#39;n&#39; roll of the heart.

His entry into show business in Germany stems from spotting an attractive young German girl working at the cosmetics counter in the Wiesbaden PX.

Shortly after they were married, Karin&#39;s brother asked Gus why he didn&#39;t try making some records in German. Gus fired off a few letters to the recording companies and soon found himself in the studios of the Polydor company, the largest in Germany.

Needless to say, Gus had his problems with the German language. "I once spent nine and a half hours cutting one record because one of the words kept coming out wrong &#8212; you know what I mean &#8212; dirty."

Gus is due to get out of the Air Force in July and plans to remain in Germany for some time. "I have a contract with Polydor up to the end of &#39;61 and a three=year option. I like the people over here &#8212; when they tell you something, you can depend upon it."

Another added advantage in making recordings in Europe is that the artist gets a higher percentage off each record.

"You do a lot better on a poor seller over here than you do in the States," Gus explained.

As for the gloomy skies hovering over rock &#39;n&#39; roll these days, Gus says that he has already shifted gears. "What I&#39;m doing now is a slow rock &#8212; the beat is still there, but we are using things like violins and a chorus to back it up."

Gus admits that he personally prefers the blues, but the loot is elsewhere. "You can still sing blues, but you&#39;ll go hungry."

Being on the hungry side of show business is an experience that Gus hopes is behind him. Raised in Brooklyn and later in upstate New York, Gus started "bummin&#39; around the clubs" when he was about 13.

"I can&#39;t remember when I wasn&#39;t singing," he says. Somewhere along the line he learned to play the piano by ear, but he has never mastered the standard rock &#39;n&#39; roll weapon, the guitar.

After entering the Air Force, he teamed up with the Del Viking group and won the "best in blue" award among the stateside talent competition..

Their big break came when they knocked out "Come Go With Me" while the group was stationed with the Air Force unit at Pittsburgh.

The group had more hopes for another number on the flip side, but a Pittsburgh disc jockey gave "Come Go With Me" a spin and it climbed up to number two on the rock &#39;n&#39; roll hit parade during the next nine months and netted the boys a golden record.

Asked if payola had anything to do with the success of the record, Gus snorts and says, "No, man. We didn&#39;t have anything to payola with."