From the S&S archives: Westy says farewell, cites signs of progress in war 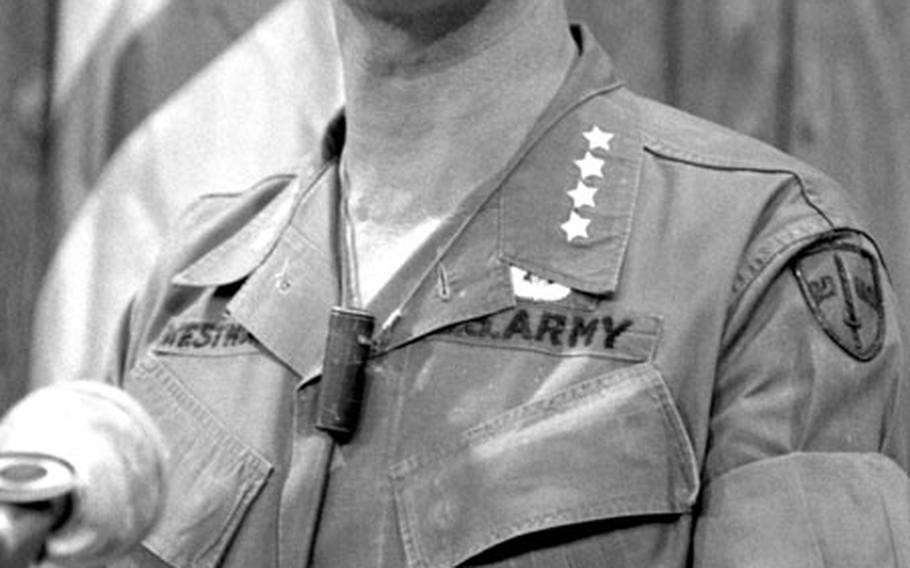 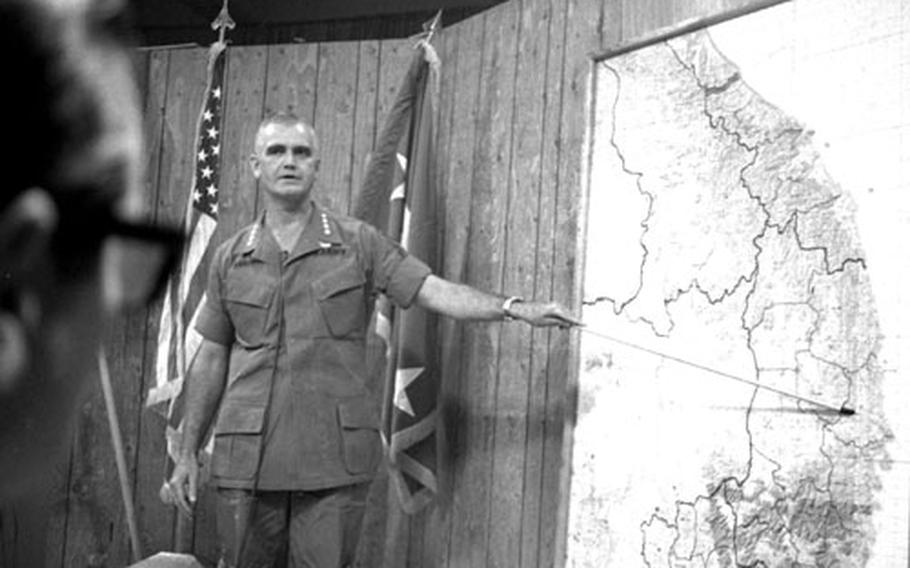 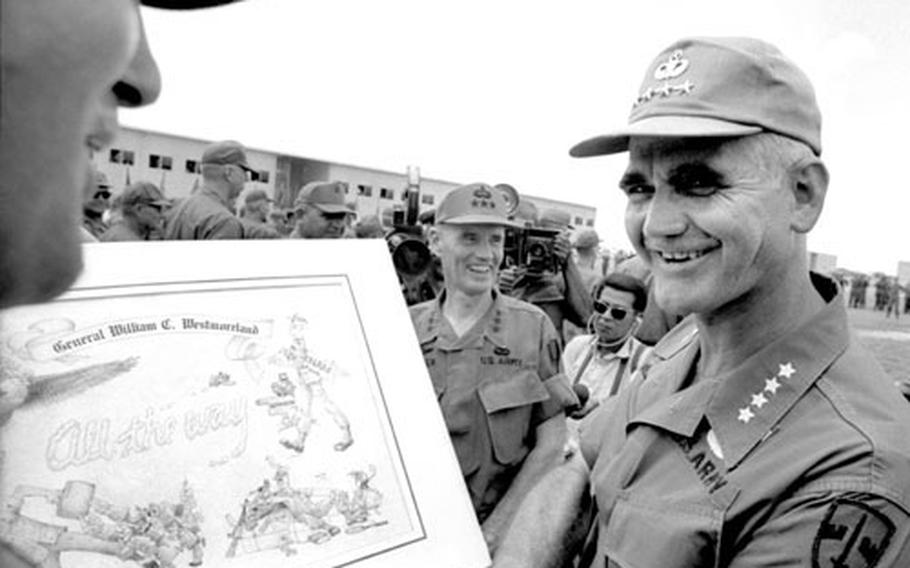 Buy Photo
Gen. Westmoreland receives a drawing during a farewell ceremony outside Army headquarters at Long Binh Post in May, 1968. (John Olson / ©Stars and Stripes)

SAIGON &#8212; The Allies have never been stronger and the enemy is starting to show the effects of his long, costly aggression.

This is how Gen. William C. Westmoreland described things on the eve of his departure from Vietnam after more than four years at the helm of the U.S. military effort here. He was to leave Saigon Tuesday, bound eventually for Washington where he will become Army chief of staff.

In a farewell press conference Monday at the U.S. Forces television station here, he restated his hope that the rise in South Vietnam&#39;s military ability and the Communists&#39; problems with supplies and manpower will permit the United States to turn over to South Vietnam much of the conduct of the war by the end of 1969.

"At this time our military posture is at height since our commitment," he said. "We are now capable of bringing major military pressure on the enemy. This we are doing, and the enemy is beginning to show the effects.

"The Vietnamese armed forces are growing stronger in size and in effectiveness. Resolve is still the key to success. Trends are favorable, but it is unrealistic to expect a quick, early defeat of the Hanoi-led enemy."

Westmoreland gave a brief analysis of the war&#39;s history since he became commander of U.S. forces in Vietnam in late January 1964. He said the Viet Cong-North Vietnamese pattern of warfare had changed from city and countryside terrorism to even bolder and, lately, seemingly desperate bids for a major victory.

Answering newsmen&#39;s questions, the general touched on several aspects of the war:

THE ENEMY &#8212; He is harder pressed for manpower and logistics than ever, and apparently more desperate.

"One of his major problems is logistics," Westmoreland said. He said the capture of enemy supplies and weapons was a serious blow to the Reds, who have brought them south at great cost of manpower and time.

"He still has in his depots that are concealed mostly across the border, in very remote areas, quantities of ammunition. But there is evidence that this (ammunition) is a problem, and has affected &#8212; and I believe will continue to affect &#8212; the tempo of his operations," he said.

The general also noted the Reds&#39; decline in "enlistments," from about 7,800 a month only a year and a half ago to an estimated 2,000 now. He said the enemy&#39;s performance in the field was generally deteriorating.

Many of the Red troops, he said, are apparently being thrown into "slaughter" with little if any training, and that recent enemy defectors have been saying that they deserted because of orders to go on suicidal missions.

THE SHELLING OF SAIGON &#8212; "It&#39;s a very difficult thing. It has subsided some, and I think will subside more as we acquire a little more precise intelligence.

"But to stop the indiscriminate firing of the few mortar rounds, the few rocket rounds, in consideration of the very wide open and chopped-up country around Saigon is almost an impossibility.

THE WAR&#39;S FUTURE &#8212; "Of course, I can&#39;t predict or forecast on what&#39;s going to happen in Paris. It would appear to me the enemy will continue to bring pressure to bear on the government of Vietnam ... will continue to harass the people, and generally follow the same tactics they have in the past.

"&#39;They will continue to strive for some major military victory.

"There&#39;s a large build-up in western Kontum Province now. I&#39;m unprepared to say whether we&#39;ve preempted this at this stage or not. We may have, because we&#39;ve been putting tremendous fire power on the enemy in that area, using B52s and tactical air."

Westmoreland said he does not think there can be any "classical military victory" in South Vietnam. But, he said, the military outcome of the war could come as a result of the enemy realizing that the cost to themselves, and to the very country they are fighting to take over, is too high.

Earlier Monday, Westmoreland said goodby to his U.S. Military Assistance Command staff. He praised the headquarters troops and in particular the MACV "Raiders" that stood before him in front of his "Pentagon East" headquarters.

The general pointed out that the MACV headquarters building had come under fire, that staff members had been lost in combat in the Saigon area. Headquarters clerks and draftsmen had earned awards for bravery under fire.