From the S&S archives: Tough springboard to valor 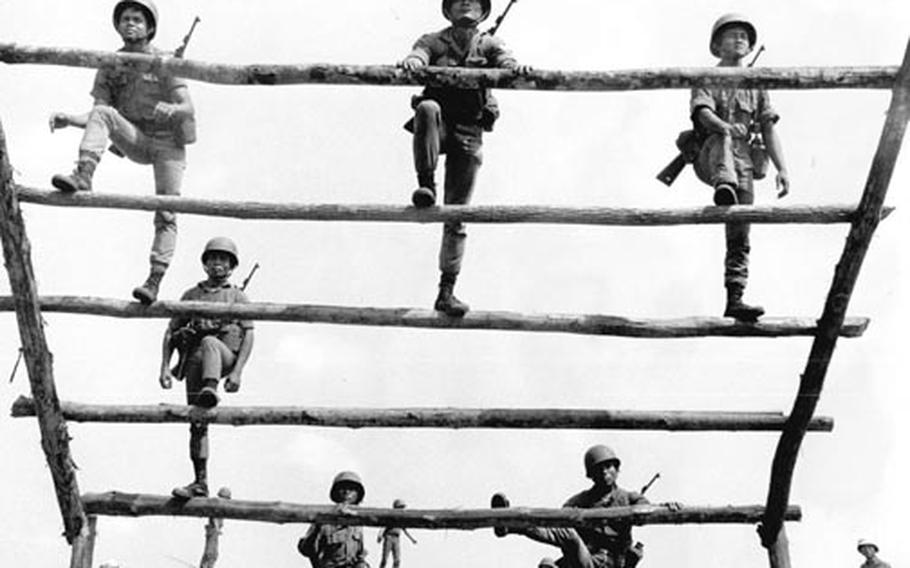 It&#39;s up and over the ladder on the rugged 100-yard infiltration course for South Vietnamese army recruits at the 18th ARVN Training Center near Gia Rai, 52 miles northeast of Saigon. (Gerard Forken / ©Stars and Stripes)

As officers and men of the units stood ramrod-straight in the heat of the noonday sun, 500 raw recruits bellied and clawed their way over the rugged 100-yard infiltration course at the 18th ARVN Training Center, near Gia Rai. Some of the basic trainees would end up as replacements with the 615th RF Co.

The trainee&#39;s day at Gia Rai begins at 6 a.m., with everyone falling out for PT &#8212; followed by eight hours of classes and military tactics. He has a 48-hour week training schedule, with an additional eight hours of night training &#8212; including night ambush and patrolling techniques. The cycle lasts nine :weeks.

Also in training at Gia Rai are RF companies completing a five-week refresher course. The soldier is trained to defend his home and village and to search out the enemy. He has performed in an outstanding manner even though his pay is somewhat less than the regular ARVN soldier.

Regional Force troops have been credited with killing more Communists than other government soldiers.

Lt. Col. Tran Van Nhut, commander of the training center, is high in his praise of the trainees. "Many of these young men come from Saigon and other cities and are only too-well aware what death and destruction the Communists can render after the Tet offensive," he said.

"These men are fully determined to learn all they can and to leave here as confident infantrymen. Since the beginning of the year, we have not recorded one AWOL."

The 32-year-old colonel &#8212; a former Marine battalion commander &#8212; welcomed the arrival of the new M-16 rifle and M-60 machine gun for the regular ARVN soldier. He said the added firepower in the hands of the government troops would do much to build morale and to crush the enemy.

Lt. William E. Sperry, 26, of Cusick, Wash., one of two American advisers at the training center, has also seen a marked improvement in the six months he has been assigned to Gia Rai. "Unlike the American advisers who speak the native language or use interpreters, these men are on their own &#8212; often with Chinese, Montagnard or Cambodian-descent volunteers who speak little or no Vietnamese."

"We are ready and waiting and will give each man the best training possible," said Col. Nhut, who spent two years at the U.S. Marine Corps Headquarters, Quantico, Va. "We train them as if their lives depended upon it &#8212; it does! They are aware of this and make good students &#8212; and later, on the battlefield, great soldiers."