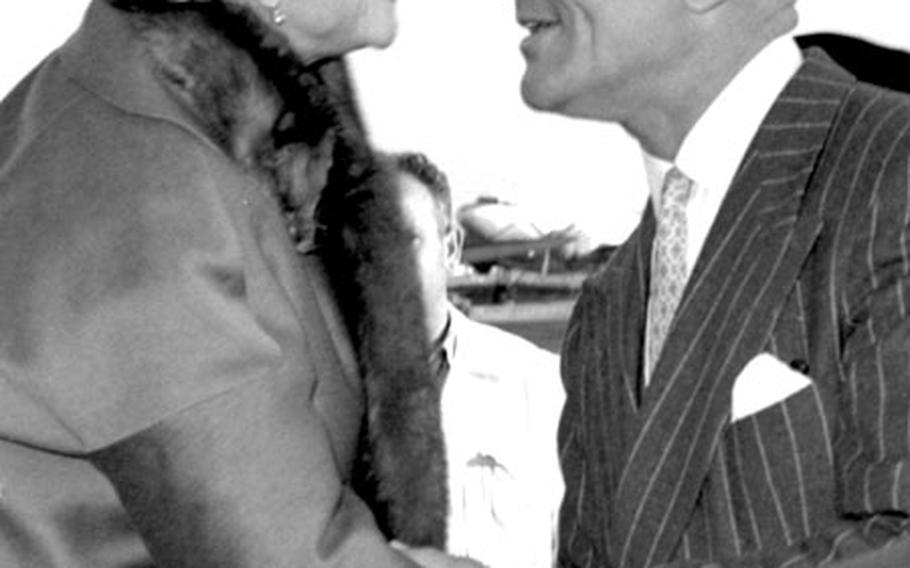 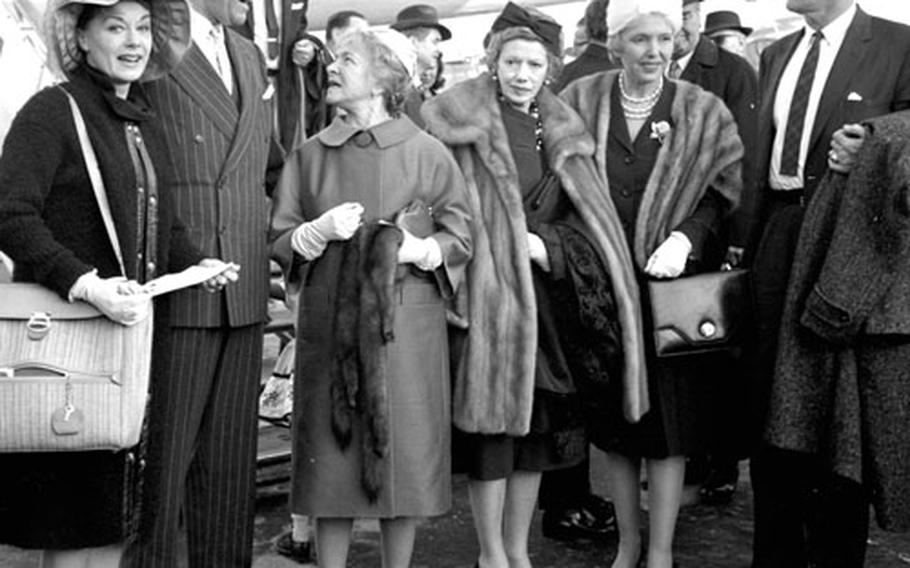 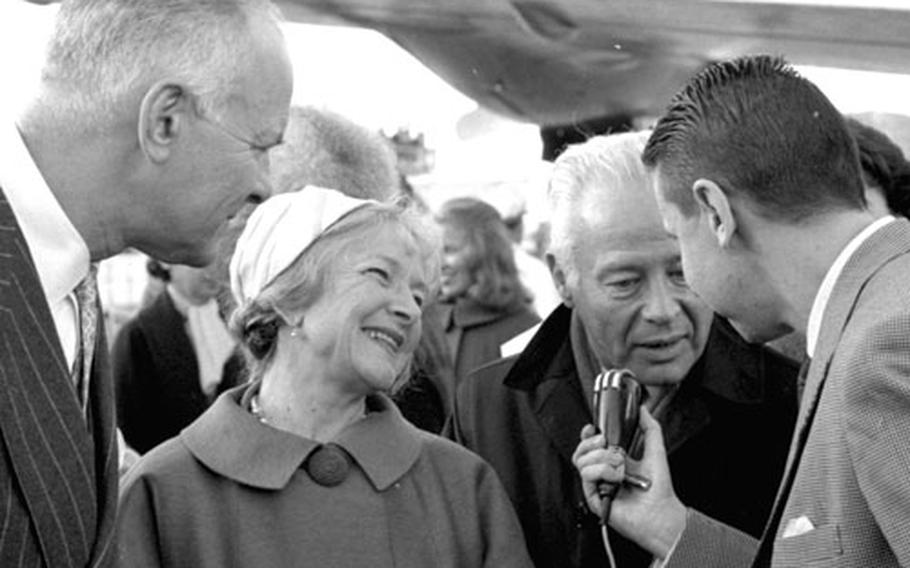 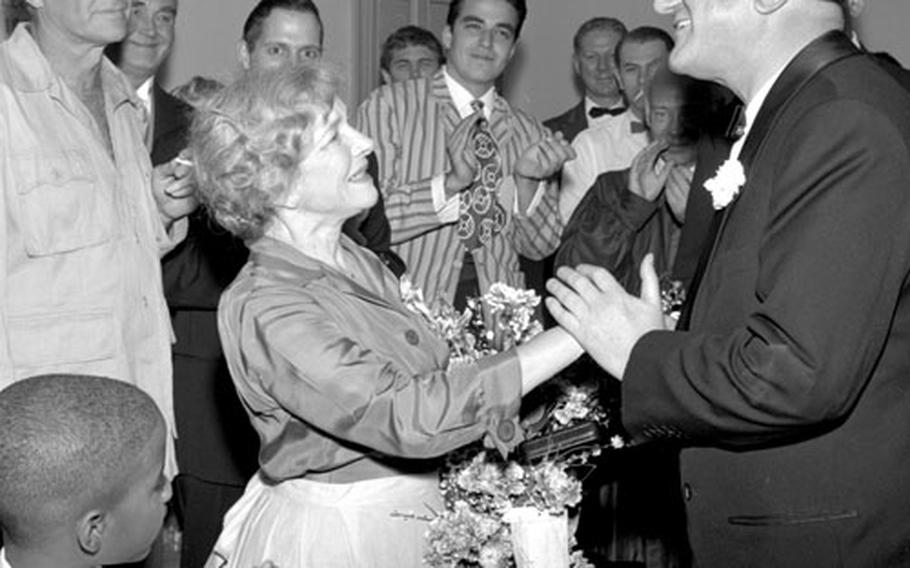 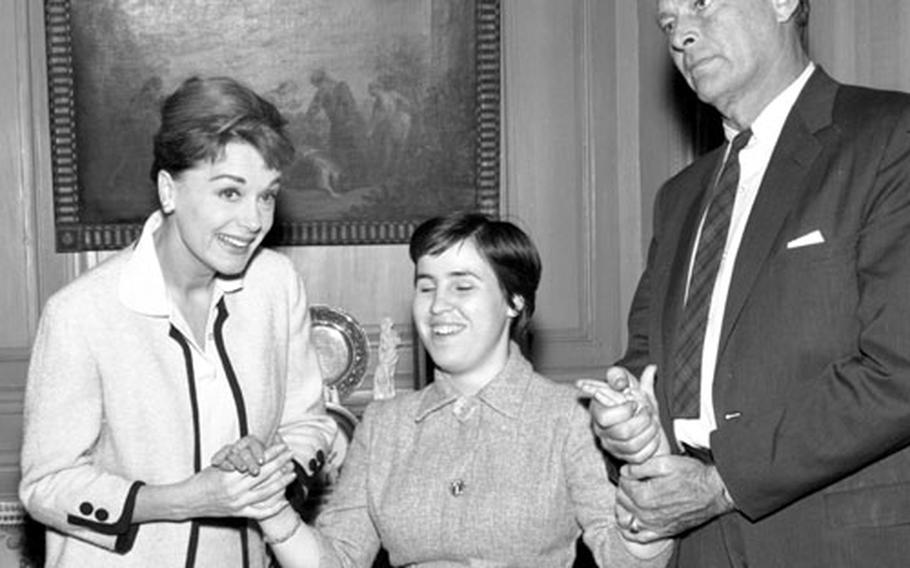 A SHORT WHILE AGO President Kennedy called to the White House four Americans who have made names for themselves in the theater, movies and TV.

They were Helen Hayes, "first lady" of the American stage, June Havoc, Leif Erickson and Helen Menken. The President invited them shortly before they left with 28 other actors and actresses on a three-month tour of 24 cities in 17 European and Near East countries.

President Kennedy told the thespians he was very happy about their tour because it would present to the peoples of the countries they visited another side of American culture, which, he added, was very important at this time.

The tour is one of 135 groups that have taken 3,500 American artists to 102 countries of the world under a State Department cultural program in the past six years.

The group, led by Miss Hayes, is the: first dramatic company &#8212; the others have been from concert, music and ballet fields.

It is called the Theater Guild American; Repertory Company and it is the first time that the guild, which has been a major influence in shaping the American theater through four decades, organized a company, to present plays outside the U.S.

Miss Hayes is appearing in two of the three plays hi the repertory &#8212; Thornton Wilder&#39;s "The Skin of Our Teeth," a Pulitzer Prize winner, and Tennessee Williams&#39; "The Glass Menagerie."

In 1955, her 50th anniversary on the stage, a theater named for her was opened on Broadway. Miss Hayes made her stage debut at five.

Miss Menken came out of retirement especially for the tour and is in "The Skin of Our Teeth."

Erickson, who as a chief photographer&#39;s mate recorded historic World War II landings in Iwo Jima and elsewhere in the Pacific, is in all three plays. The third play is William Gibson&#39;s "The Miracle Worker," an intensely moving work about the childhood of Helen Keller. It tells the story of how she was taught to communicate after being struck blind and deaf by meningitis at nine months of age. A brilliant 9-year-old, Rona Gale, plays Helen Keller &#8212; entirely in pantomime.

June Havoc is Helen&#39;s mother in "The Miracle Worker" and Sabina in "The Skin of Our Teeth," an allegorical portrayal of man&#39;s ability to withstand the calamities that beset him.

The troupe began its tour March 7 in Madrid&#39;s Teatro Espanol under the patronage of Ambassador and Mrs. John Davis Lodge. The Lodges&#39; older daughter Lily, an actress, is a protege of Miss Hayes, but was unable to join the company because of other commitments.

The gala Madrid opening was like a Hollywood premiere, with the theater lit by floodlights and crowds in the streets to watch the first night audience come and go. Spanish critics hailed the company as the best foreign one ever seen in Spain. And Miss Hayes was honored by being presented the Order of Queen Isabella by Foreign Minister Jose Maria Castiella after the first performance.

The next stop was Barcelona.

The company is travelling by air in three planes, two of them for scenery and stage equipment. The tour represents a considerable financial sacrifice for the stars.

Erikson remarked he is getting only half his usual salary.

The plays have been in production since just after Christmas. Before coming to Europe, the company performed all three in Palm Beach, Fla., and Washington, D.C.

After the Madrid premiere, secretary of State Dean Rusk cabled the actors:

"The personal friendships you establish and the sharing of our cultural attainment with the peoples of other nations will contribute significantly to international understanding which is so important in the world today."