From the S&S archives: The 'supermom' of show biz 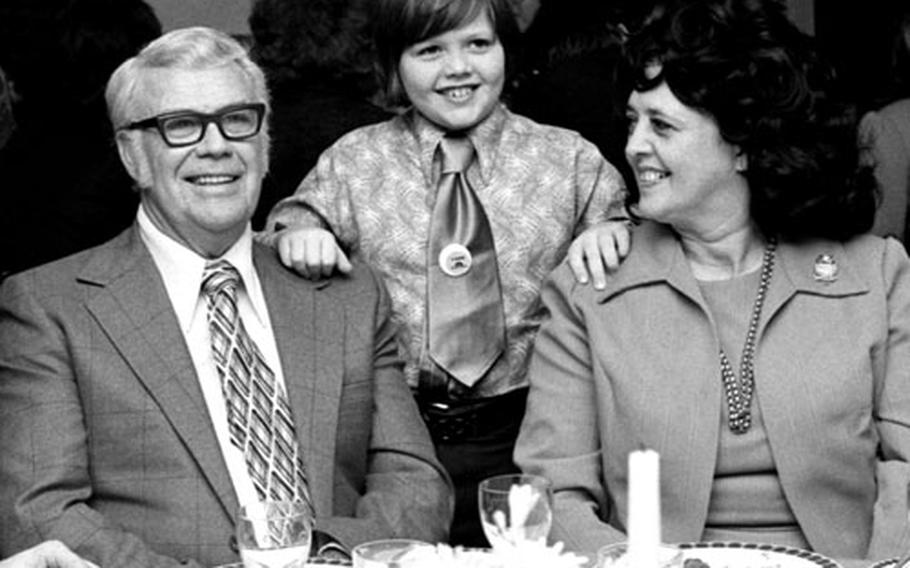 "I FIND A GOLDEN thread of truth running through all religions, but through mine I find all truth," says Olive Osmond, Mormon mother of the celebrated musical Osmonds.

Despite the frantic demands and helter-skelter existence of the entertainment world, Olive and George Osmond make sure their sons live according to their church&#39;s Word of Wisdom.

The five performing Osmonds first attained national prominence in 1970. Today, there are six sons in the act and nearly every record they cut turns to gold, selling more than $1 million each.

Personal appearances by the brothers touch off adulation and fan hysteria that has been compared to "Beatlemania" in the 60s.

"Our family feels a real responsibility .and obligation to the fans," Mrs. Osmond said. "We want their followers to see that it&#39;s possible to climb the ladder of success without resorting to drugs or a bad way of life.

"Dad and I feel our sons are sort of missionaries to the world," she said. "They&#39;ve got to be an influence to their fans."

During the Stars and Stripes interview with the dark-eyed, dark-haired mother of nine in Bremen, Germany, her youngest child, Jimmy, 10, blurted out, "Put it in your story that she&#39;s our supermom."

The senior Osmonds were married Dec. 1, 1944, after what she calls a whirlwind courtship. George had returned from three years in England with the Army Air Corps.

He was awaiting discharge at a base in Ogden, Utah, where Olive worked as a training publications secretary. "I used to cut a lot of stencils and handle a lot of secret Army documents," Mrs. Osmond said.

She recalled her first meeting with George.

"He walked in in that uniform and it just knocked me out. I went home that night and wrote in my diary that I&#39;d just met someone who was going to mean a lot to me.

"I believe in love at first sight and, George has proven to be everything that I ever thought a husband should be."

The Osmonds keep their roots in Utah and still live there (Huntsville) part of the year. However, this show business family also has a home in Los Angeles.

As a girl in Malad City, Idaho, Olive learned the saxophone and later played in a band for church and school dances. However, she says George is the singer. During his youth in Afton, Wyo., he performed in a number of school operettas.

"Oh yes, he has a lovely voice and even belonged to a men&#39;s chorus after we were married," she said.

During the first years of their marriage George sold insurance and real estate. Olive operated a small dress shop and a rural post office branch.

"When the kids were very little, George and I were both very active in the church," she said, "We were teaching theology and Sunday school classes.

"We also had a garden and a cow to attend to. I made all of our bread and did a lot of canning. Soon, we found we were working around the clock.

"Finally, we decided we weren&#39;t spending enough time with our own family, so Friday nights became `family night&#39; and eventually we included Saturday nights."

The parents encouraged their youngsters to put on skits or shows, with a different member of the clan acing as emcee each night.

The Osmond boys later did their shows for church and civic groups. "The Old Oaken Bucket" was the first number that Alan, now 23; Wayne, 21; Merrill, 20; and Jay, 18, learned to harmonize &#8212; barbershop style.

As The Osmond Brothers they got their first important professional booking at Disneyland near Los Angeles and Andy Williams&#39; father was in the audience.

"He later told me they reminded him of his own boys when they first started performing," Mom Osmond said. "He called me one night and asked the boys to audition for Andy&#39;s TV show."

They did, were hired and clicked with Andy Williams&#39; TV audiences. The rest is show business history.

"It was like a fairy tale really," says Mom. "We never planned it that way, it just grew. But it&#39;s brought us a lot of happiness."

By May 1972, the Osmonds were big time. Donny, now 15, was a full-fledged member and a solo artist in his own right, and Jimmy, now 10, had made his debut as "a special guest star."

Pretty, dark-haired Marie, 13, is the latest to join the family act. She&#39;s also their only daughter.

Mom and Dad Osmond accompany their children on tours and help manage their careers. However, these devout Mormon parents also insist that the youngsters follow the doctrines of their church.

"We have encouraged our youngsters to study other religions and they have. But like George and I, they haven&#39;t found anything comparable," says Mom.

At press conferences and receptions, the boys shun alcohol, coffee or colas. These are considered taboo.

"The body is a temple for the spirit to abide in," Mrs. Osmond said, "so you see, there are even laws of health involved in our religion. If you&#39;re healthy, you&#39;re happy."

In Utah, the family has established the Osmond Foundation to further education and research for the blind and the deaf. Both Virl and Tom devote their energies to this operation, as well as running their brothers fan club.

Mrs. Osmond proudly pointed out that her two older sons both served as Mormon missionaries upon completion of high school.

They have also made Olive and George grandparents. Virl has three children and Tom has one child. "They&#39;re beautiful children and we&#39;re very proud of them," grinned Mrs. Osmond.

She is also very pleased at the success of her singing sons.

"I know it&#39;s not wrong for them to be performing," she says. "When you peek from behind the curtain back stage and see all those smiling faces, everybody forgetting their worries for an hour or so and everybody&#39;s entitled to that, then I know that it&#39;s all right."