From the archives, 1968: The nameless girls of Bien Hoa 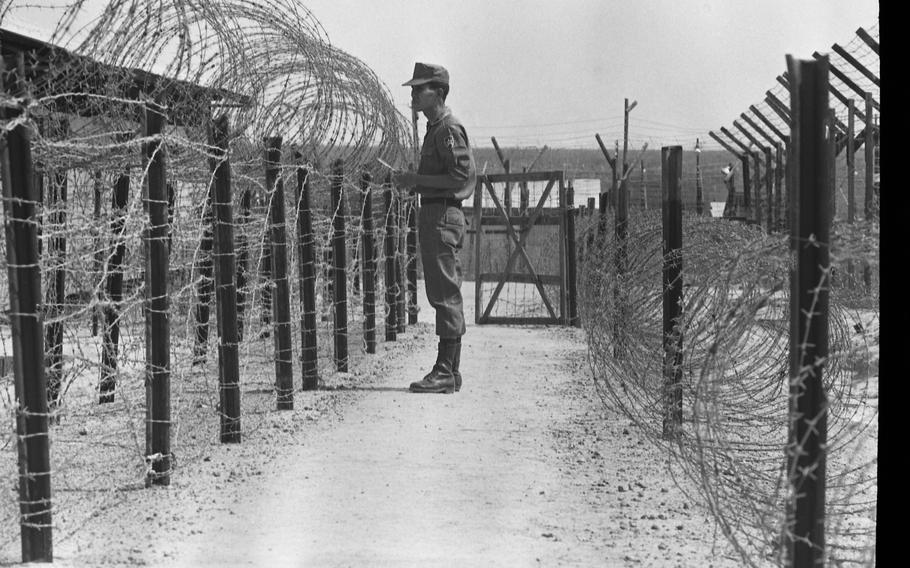 This article first appeared in the Stars and Stripes Pacific edition, May 26, 1968. It is republished unedited in its original form.

Yesterday she was a defiant Viet Cong guerrilla carrying a man-sized rifle through the jungles around Saigon.

Today her defiance is gone. She is a sad looking little girl sitting in purple pajamas in deep thought. She has a lot of time to think.

This teen-age girl is a prisoner of war in the III Corps Tactical Zone Camp near here. She is one of 85 girls and women interned here within the layers and layers of barbed wire that surround the POW camp.

They share their imprisonment with 900 of their male counterparts.

The girl has no name for newsmen visiting the POW camp. Geneva Agreements prohibit that. But she has a number — 1047.

They all have a number.

The Bien Hoa POW camp is peaceful. Almost serene. The prisoners look happy. They look well fed. They smile and wave. Occasionally, a visitor sees a look of hate.

But the Bien Hoa camp has never had an outbreak of violence. No one has tried to escape. The camp has been open over two years. 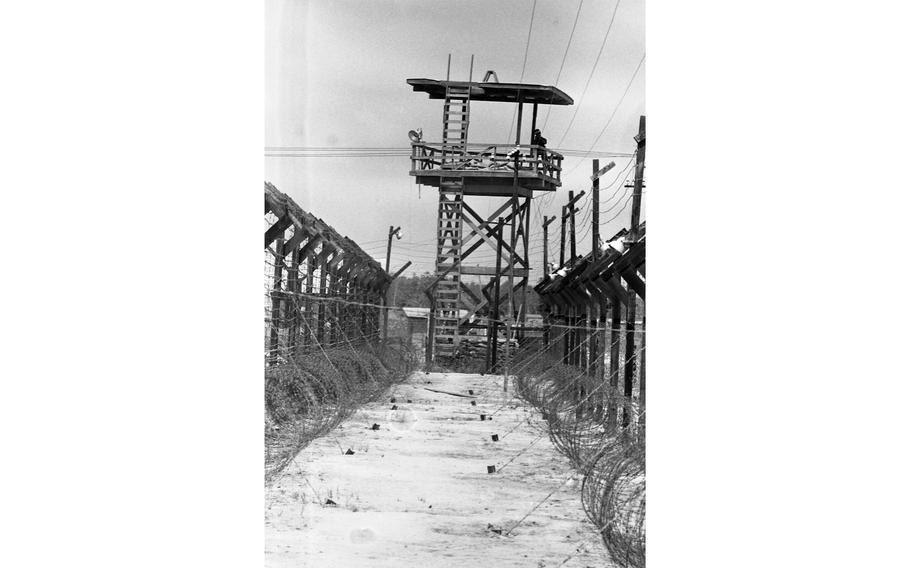 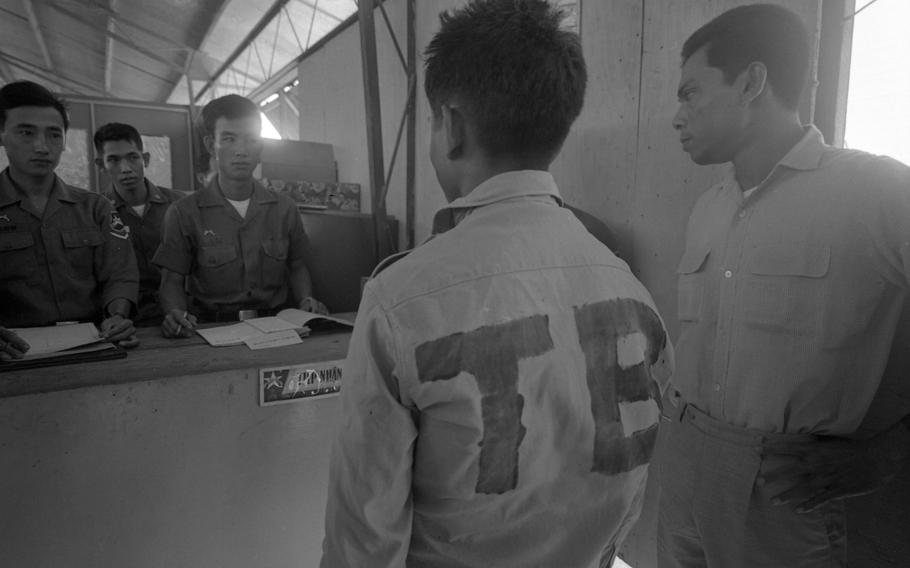 Viet Cong prisoners are classified into groups and photographed upon entering Bien Hoa POW camp. In April 1968 the camp held some 900 male and 85 female prisoners. The male prisoners are segregated in groups by their rank — 14 officers, 30 non-coms and 830 privates. (John Olson) 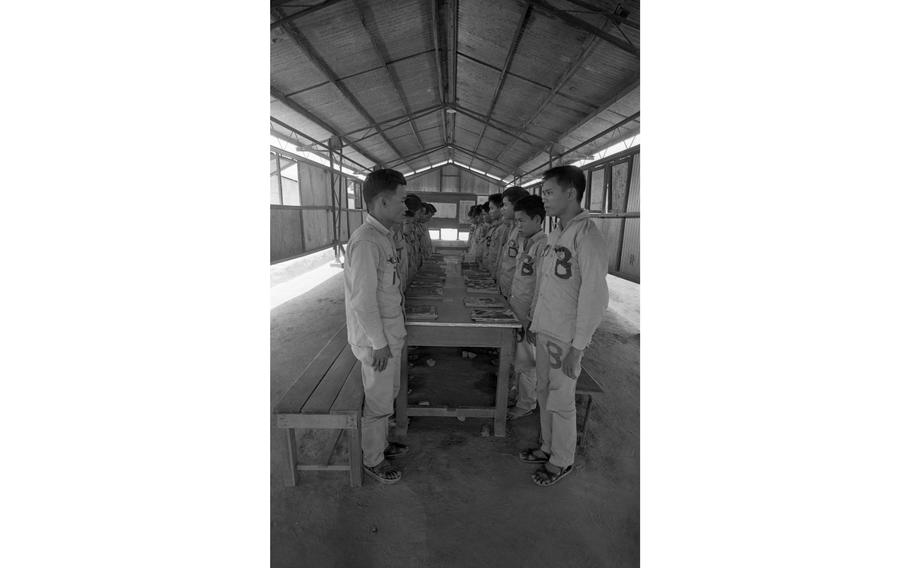 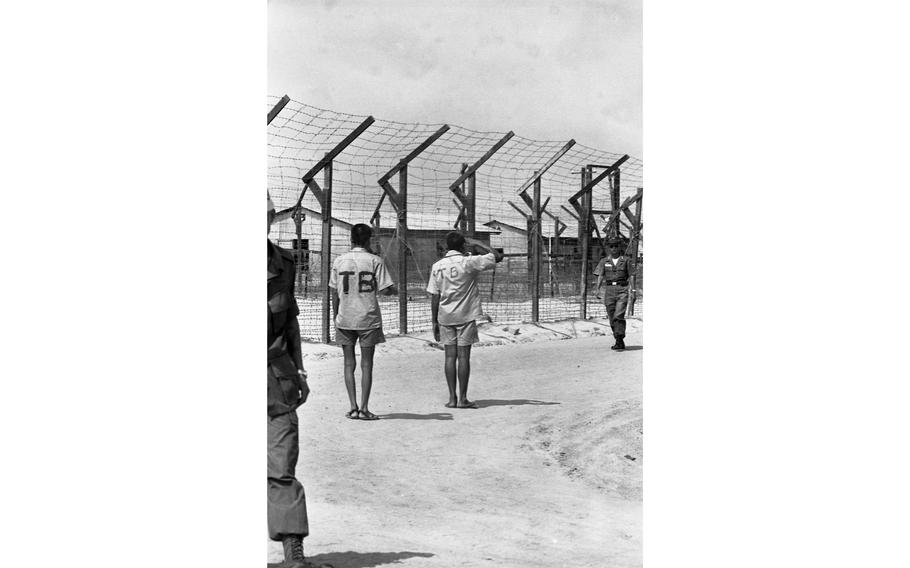 Viet Cong prisoners pass through the Bien Hoa prison camp. The prisoner of war camp is a compex of 55 buildings; barracks, kitchens, mess halls, libraries, and a dispensary with a doctor. (John Olson) 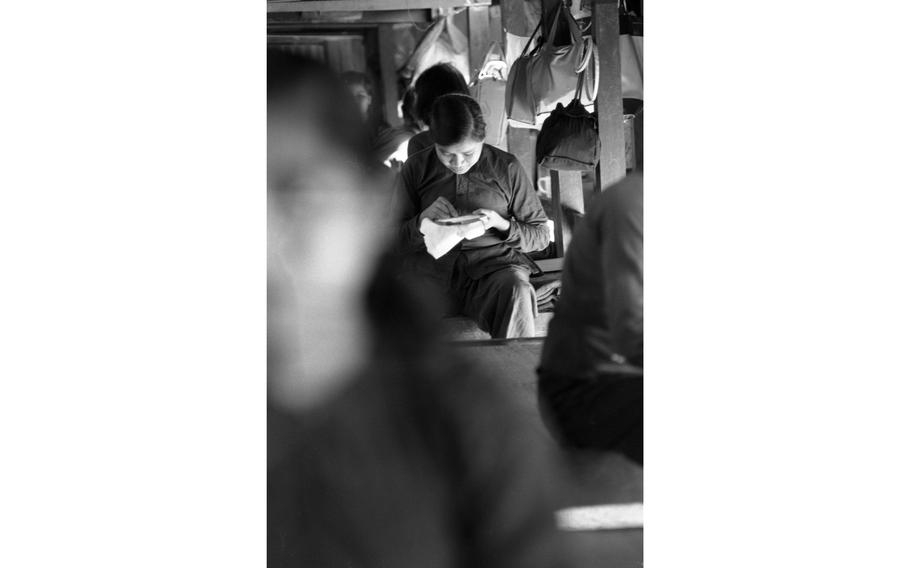 A female Viet Cong prisoner passes the time with some embroidery inside her quarters. Some 85 girls and women — 21 females were under the age of 18 — were interned in the Bien Hoa POW camp that opened in 1966 and housed a little less than 1,000 prisoners in 1968 — 200 of which were captured wearing North Vietnamese Army uniforms. (John Olson)

Why the tranquility? An American sergeant adviser here thinks he knows the answer.

“They’ve never had it so good,” he says. “They eat better than they’ve ever eaten. They sleep in beds under a roof. They don’t have to worry about bombs and bullets. The fight’s just out of them. They’re fat and happy here.”

But for those who are not "fat and happy," for those who would like to get out and rejoin their comrades — things must look pretty dismal.

First of all, they have rows of barbed wire to get through. Then they must face the arsenal of an entire Vietnamese military police company.

“That may be another reason they’re happy where they are,” the sergeant added with a smile.

The Bien Hoa prisoner of war camp is a complex of 55 buildings — barracks, kitchens, mess halls, libraries and a dispensary with a doctor.

The camp today has a prisoner population of just under 1,000. Besides the girls, these include 14 officers, 30 non-coms and 830 privates. Each group is segregated. The youngest prisoner is a 13-year-old boy, the oldest an 82-year-old female Viet Cong liaison officer.

A third of the POWS, including 21 of the girls, are under 18. About 200 were wearing the North Vietnamese Army uniform when captured. A few are South Vietnamese who were sent to the north, trained, regrouped and sent back south. The rest are local Viet Cong guerrillas.

The captured Communists met their fate when they met the American, South Vietnamese, Australians and Koreans who ended their fighting careers.

A chart in the camp commander’s office credits the Americans with 623 captures, the Vietnamese Army with 316, the Australians with 12 and the Koreans with seven.

The POW camp at Bien Hoa is one of several in the country.

There are other camps at Pleiku, Da Nang, Can Tho, Qui Nhon and Phu Quoc.

Most have been expanding since they were first built.

Once captured, the Vietnamese Government labels the person a Communist. Before December 10, 1965, each Viet Cong captured was considered a political prisoner and tried in courts as such.

With more and more North Vietnamese soldiers coming south, the policy was changed and captives are now officially labeled and treated as prisoners of war. 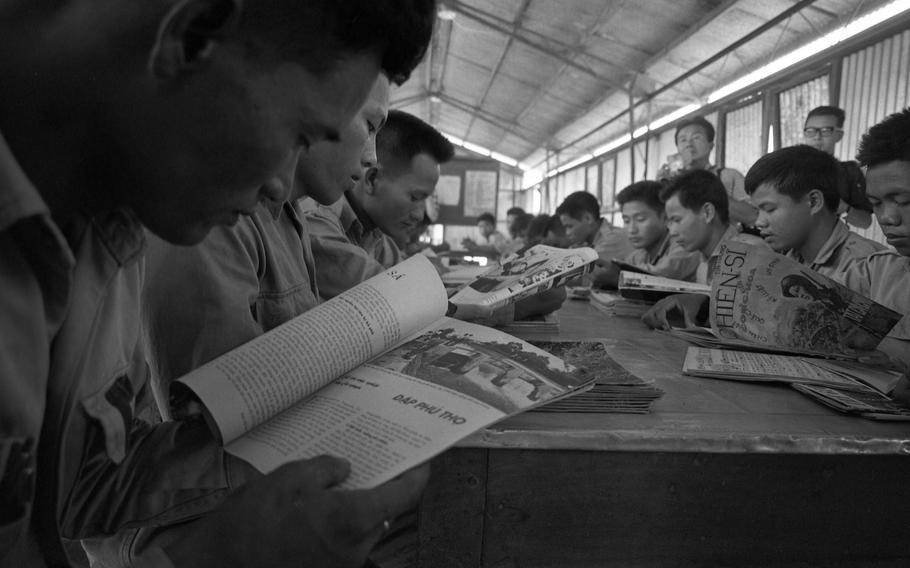 Male POWs read magazines in the prison library at Bien Hoa. They also have radio and television privileges. (John Olson) 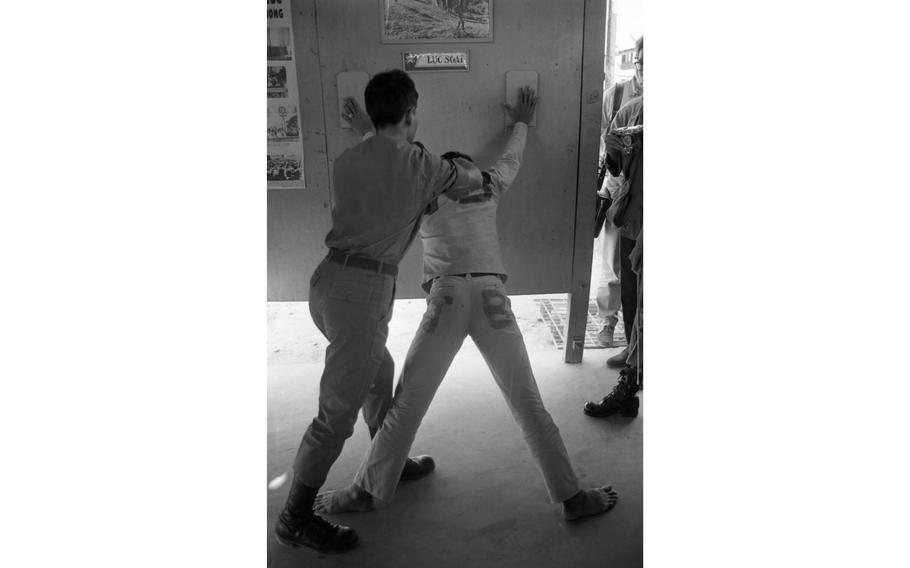 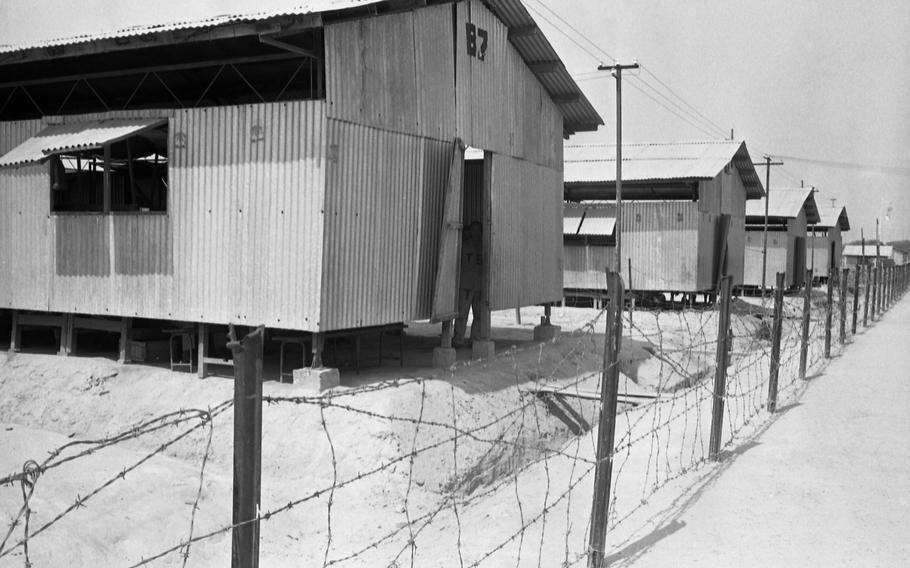 The Bien Hoa prisoner of war camp is a compex of 55 buildings — barracks, kitchens, mess halls, libraries, and a dispensary with a doctor. (John Olson) 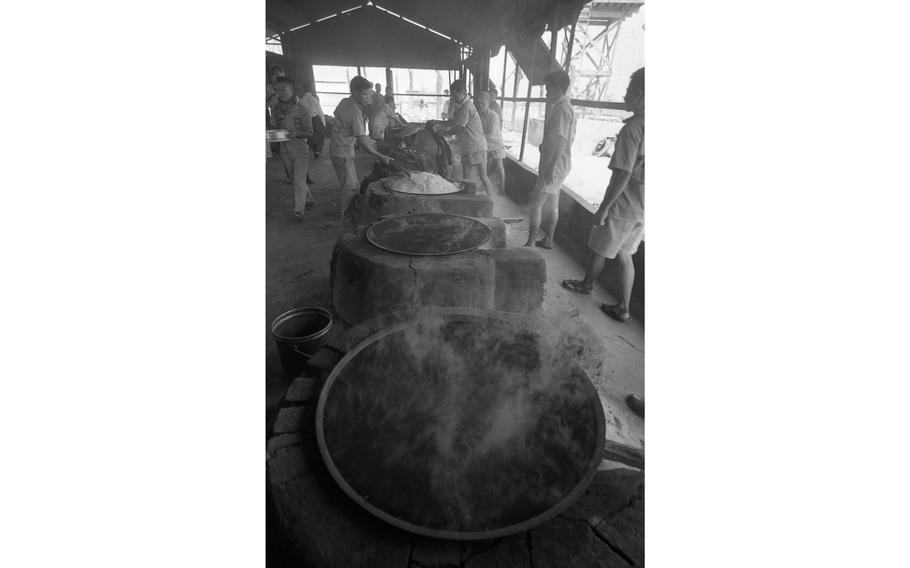 Once the prisoners are settled, they are given jobs — such as preparing meals in the camp’s kitchen — and paid about seven cents a day for performing them. (John Olson)

Vietnamese camp officials say the POWS are treated in accordance with the 1949 Geneva convention.

In all appearances, the Bien Hoa POW camp is a good example.

Prisoners are stripped of their weapons and interrogated before arriving at Bien Hoa. The first step here in a long list of processing is classification by rank. Then numbers are assigned to each person. Biographies are compiled. The POWS are fingerprinted and photographed. They are issued clothing, toilet articles and mess gear.

Once settled, the POWS are given jobs and paid for performing them. About seven cents a day.

They are allowed to listen to radio twice a week and to watch television once a week. Their library is filled exclusively with government printed pamphlets and magazines, the camp commander said.

He added that there were political lectures held for volunteers who showed desire to come to the other side. In that sense, the camp is also a rehabilitation center.

Prisoners are allowed to write one letter a month, camp officials said. “The North Vietnamese POWS have been told by their leaders not to write home of captured,” an official said. “And they don’t.” He said most of them feared reprisals against their families.

Prisoners are also allowed weekly visits. Visitors may bring food with them.

A government booklet explaining the camp system tells that the prisoners also have the freedom to attend religious ceremonies.

The booklet says that "disabled and incurable" POWS are sent back to the North and "wholesome and disillusioned" prisoners are released in the South.

But, for the great majority, the POW camp becomes a home, a way of life.

The girls soon learn to sew and are kept busy keeping the camp’s administrative offices clean.

In the evening, men and women prisoners get out to play soccer or volleyball — the men on one side of the camp, the women on the other side.

Segregation makes life in a prisoner of war camp with at least something to be desired.

We have digitized our 1948-1999 European and Pacific editions, as well as several of our WWII editions and made them available online through http://starsandstripes.newspaperarchive.com/