From the S&S archives: Ted Nugent shoots a mean guitar 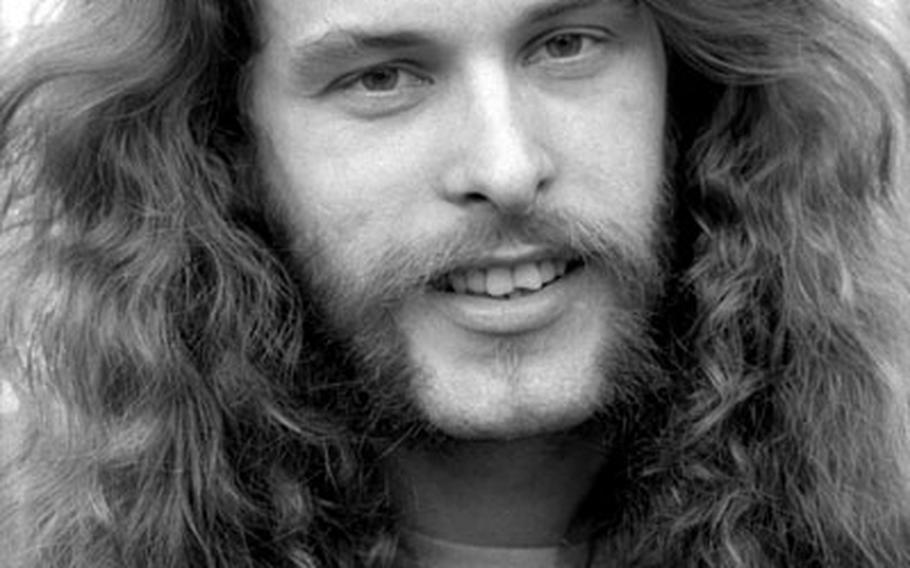 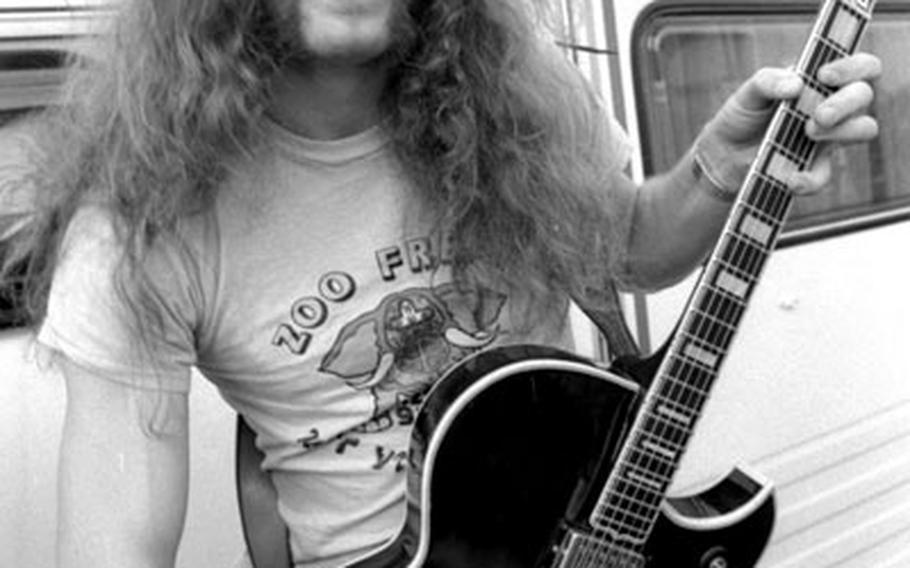 Motor City rocker Ted Nugent (remember the Amboy Dukes?) doesn&#39;t have to hustle quite as much these days, but the rhythm of the road was still in his voice backstage at the Rottweil Rock Circus.

"It&#39;s been really hard. If you saw my schedule you would refuse to believe that we accomplished that schedule over the last 10 years.

"But that shows you how crazed &#8212; I mean, we are gung ho. There was nothing that could stop us. And that&#39;s one reason why a lot of musicians didn&#39;t keep up, because it was a very, very difficult pace.

"But it taught me so much."

Nugent is finally starting to make the real big time financially. "I&#39;m making the same now I always have, but I&#39;ll make more in &#39;77 than I&#39;ve made throughout my whole life combined. But I&#39;ve always lived comfortably, you know."

He gloated about his success &#8212; and isn&#39;t shy about feeling it to be long overdue. "The first Epic album has been on the charts for 44 weeks. It&#39;s going back up the charts again, and it went gold.

"I&#39;ve been ready for eight years. I ain&#39;t changed one iota in the last eight years. It&#39;s just that I never had the right teamwork, never the right managers. The record companies have always been a joke."

Except the current one. "Its the best. They&#39;re doing what&#39;s gotta be done. When Ted and the boys play, we kick brains apart, man, and those people are gonna want to buy an album, to sustain the feeling that they got at the concert. If the record company&#39;s on the ball they&#39;ll make those albums available. And that&#39;s what they&#39;re doing, plus promoting it realistically. I think it&#39;s copasetic."

He snatched a mosquito from midair and interrupted himself: "Fast mother!" he exclaimed and then grinned.

But he couldn&#39;t deny flatly that he is, in some important ways, a part of the "drug culture" that has so many ties with rock music.

"It&#39;s hard to specify. Obviously my music is extreme high energy music, and obviously I&#39;m gonna have innumerable contacts with people who are deep into drugs &#8212; all different phases of involvement with drugs, from hooked to just mild association.

"And I can see, from their explanations of their feelings when they&#39;re on drugs, that indeed they can jump on the feeling of the music."

"I&#39;ve never been inspired by any drugs. In some of my early, music, the lyrics were written by other members of the group who were into drugs. So there were definitely some drug-concept lyrics, but the only lyrics I write about drugs is how I think they stink and how I don&#39;t need &#39;em."

He said he&#39;s not trying to put any anti-drug messages into the music.

"I smoked some dope and some hashish for about a week in &#39;67, and it was stupid, I thought. And I snorted some coke one night in &#39;67. I thought it was cute. Not as good as a nice chick or a good family dinner or something.

"And I drank when I was 16 just to be outrageous. But I can be a zillion times more outrageous straight.

"I&#39;m more outrageous than you can write. Our music is more intense than anything &#8212; than any kind of music or anything in the world &#8212; it definitely surpasses sex, or anything like that &#8212; to me, and I think to the audiences, because I see those audiences every night, man.

"We play every night and we see the people going nuts. It only means one thing: everybody&#39;s having the greatest time of their lives. It&#39;s better than any orgasm.

"Or it is the best version thereof. You know?"

The music is Detroit hard rock, rough and intense, the flip side of Motown slick. When he started there were a lot of people putting out that Detroit sound, but they&#39;ve mostly faded away.

"Bob Seger&#39;s doing well. There are only a few survivors, you know. Most of them bit the dust because of drugs."

Nugent doesn&#39;t hang around the city much anymore. "I only go to Detroit when I play there. I get more than enough city life on the road. When I&#39;m off the road nobody can find me. I&#39;m in the woods."

"I get plenty of city and plenty of people when I&#39;m on the road. I would not allow my life to go without either one. It&#39;s good for you, the extremes. I think any single thing can become a rut after an amount of time. I&#39;m surprised I did what I did with such energy for such a long time."

And he says that energy is nowhere near slacking off. "Oh, no way. When I&#39;m on the road forget it. I&#39;ve still got more energy than any 50 people. When I&#39;m home I still have the energy of 50 people too, but I direct it differently. I direct it towards my child, my wife, the outdoors, hunting."

Does it bother his wife, and two-year-old Sasha, that he&#39;s gone so much?

"Yes. And thinking of them, it bothers me that I&#39;m gone. But when my wife married Ted Nugent she knew what Ted Nugent does.

"She minds it, but she&#39;s an expert shot with a pistol and she feels safe, plus I have an Irish setter and a huge white wolf, and there&#39;s very little worry. The wolf would just as soon eat somebody. It&#39;s actually half wolf and half shepherd, 160 pounds. It&#39;s mammoth, pure white."

The outdoorsman isn&#39;t just some flower child communing with the trees. Nugent goes to the woods armed to the teeth and looking to bring home the groceries.

He said the passion for the woods crept up on him. "I&#39;m a city boy. I don&#39;t know what inspired me to get into the outdoors like this, but I&#39;m deep, deep into it. I love it, I crave it. The day I get home I spend four days with the family, then I go up north bear hunting.

"I have a little cabin in the Lower Peninsula in the northern part. You know where Travers City is? It&#39;s south of there. We&#39;ll spend about a week up there."

"I&#39;ve killed elk, a dozen deer &#8212; I&#39;ve only killed two deer with a pistol, the others were bow and arrow. I killed a 2,000-pound bison three years ago in Michigan. It was in a game preserve. I drew a permit when they were culling out a couple of old bulls. Got him through the lungs. 50 yards. One arrow.

"I haven&#39;t bought any meat in six years. I fill the freezer every year and smoke a lot."

"I love guns. I think the right to bear arms is fundamental. I&#39;m an expert shot and I do carry a gun. I wouldn&#39;t think twice of killing somebody to defend myself, but I hope I never have to."

He left his arsenal at home for this trip. "I&#39;d never think of bringing it here. There&#39;d probably be no need for it. Though I would like to think that anybody who wants to could carry a gun anyplace he wants to. It&#39;s time to start wiping out some of these fools."

On his first trip to Europe, Ted is busy but having a good time.

He hasn&#39;t had a chance to get away from the hotels and the dressing rooms, though. "I would sure like to get away from the mainstream of the cities and that. I was supposed to put a grouse hunt together while I was up in Scotland. But I think we have to pass on it because we haven&#39;t got much time. I think it&#39;ll be pretty much Rock &#39;n&#39; Roll City stuff this time."

Although his new album, "Free For All," will be out shortly, the music on stage this time around will be mostly from his first Epic album, titled simply "Ted Nugent."

"The way we planned it was to continue doing the stuff off the first album. We&#39;ve never been over here and this is no time to experiment, so we&#39;re gonna do the proven items."

He said he is coming back to Europe in February. "Absolutely. I&#39;d like to come over once a year and get to know the areas. I&#39;d love to get in some stag hunting in Germany."