From the S&S archives: Styx is an experience, not just a show 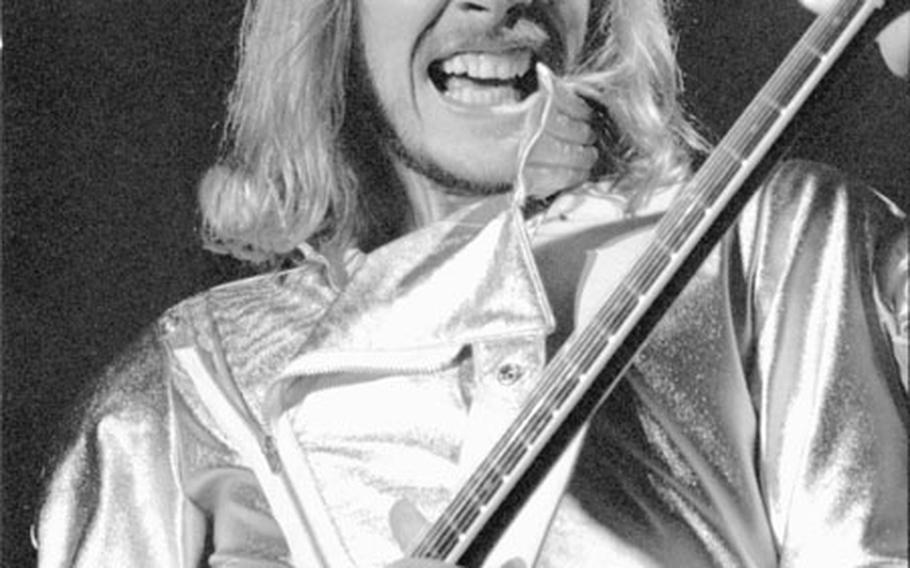 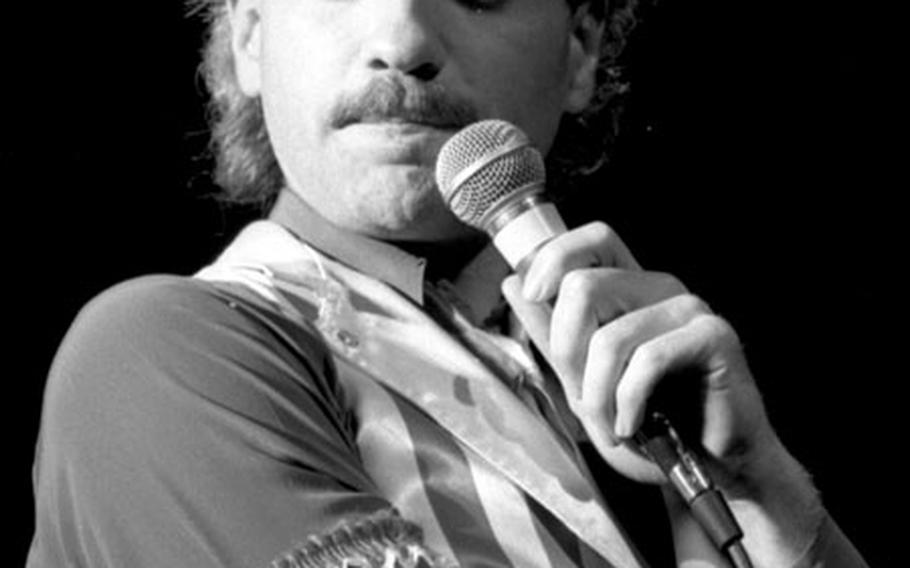 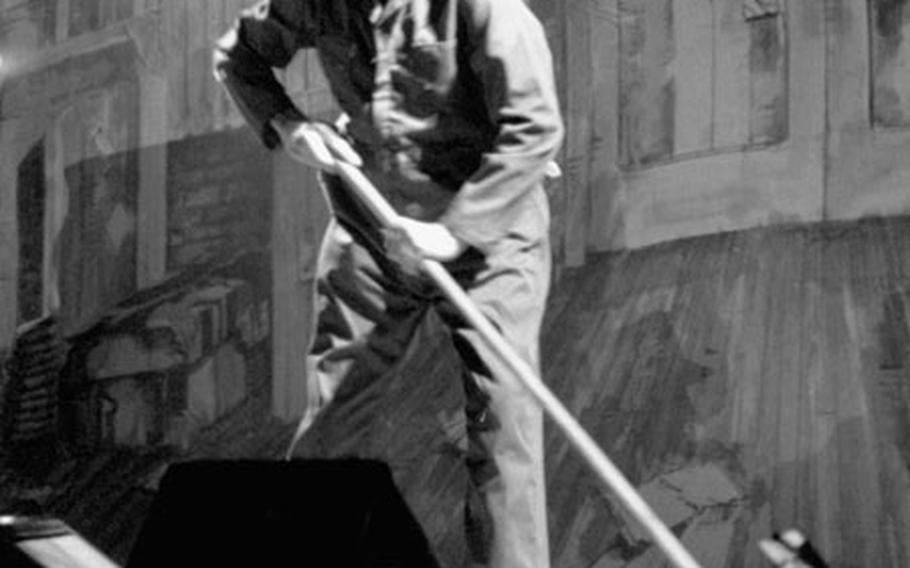 Buy Photo
Dennis DeYoung begins the show by taking the stage in the guise of a jaqnitor. (Marty Davis / ©Stars and Stripes) 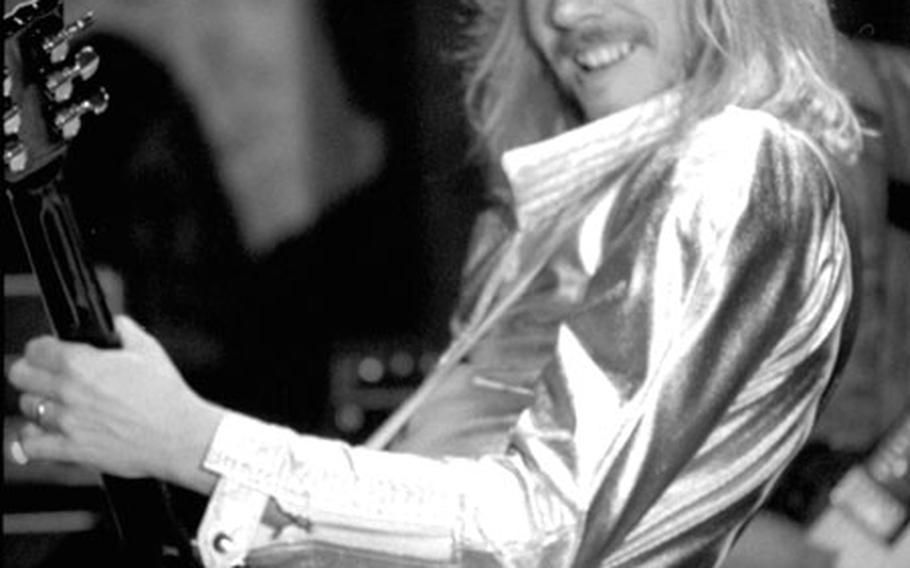 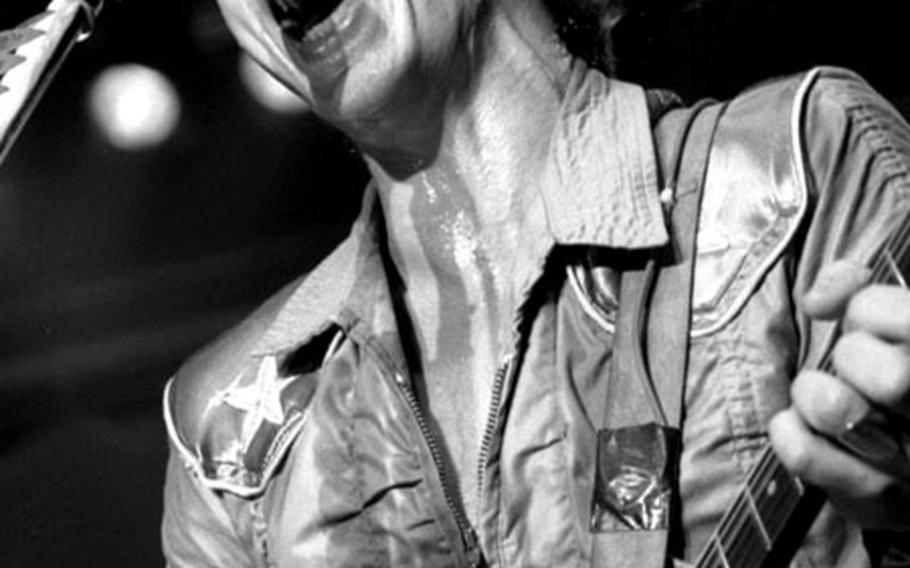 THE LINES WERE long with three and four deep. The cold wind whipped around and through the people carrying bits and pieces of conversations with it. "Did you see last year&#39;s ... I&#39;ve waited for months ... I leave in three days ... This is the greatest. .. Come on line &#8212; move."

Narrowing down to one, each person undergoes the usual search for bottles, knives or cans before entering any concert. Nuernberg&#39;s Messehalle was no exception.

This evening was the first of 10 Styx performances in Germany. People had bought tickets on the first day available several months ago. Styx&#39;s show was rumored to be the most expensive show brought to Germany.

After attending this concert, one would have to agree. Styx doesn&#39;t just do a show. It&#39;s an experience.

Messehalle officials estimated 3,500 to 4,000 battled the cold and miserable weather to attend the concert. Normally the doors open 30-45 minutes before a show, but people had begun to pour into the hall when the doors were opened at 6 p.m. for the 8 p.m. performance.

One soldier, pressed into position behind the barrier at the stage&#39;s front section, had gotten to the Messe around 3 p.m. to get a front-row standing position, or a better phrase might be, a front-row squashed position.

There was about two meters between the stage and the barrier which consisted of iron railings sectioned together. All that could be seen from the top of the railings were people and more people massed together.

Then several GIs began to fight. Now, sardines in a can have more room than these guys had. I was beginning to get worried; they were directly behind me. I began to have visions of the Who&#39;s Chicago concert where several people were trampled to death and I was about to become the tramplee. Later drummer John Panozzo said, "I haven&#39;t seen anything like this in eight years."

As the crowd settled down, the lights faded and sparklers appeared throughout. A spotlight focused on a janitor smoking an old stogie and sweeping the dirt in front of Paradise Theater. The theater was emblazoned on a curtain behind the janitor.

As he slowly made his way across the stage the strains of 42nd Street drifted through along with the sounds of yesteryear in the theater &#8212; tap dancing, rehearsals and glory that had faded away.

From the left end of the curtain, out strolled Dennis DeYoung. He sat at what looked to be an old ragtime, upright piano and began to pick out a few notes from Styx&#39;s Paradise Theater while talking to the audience about the new album.

After the theme was heard, DeYoung said, "We are so glad to be back in Germany. We are ready and fired up. All we need is &#8212; You! We just bring the music and the lights, the rest is up to you."

With a deafening roar from the audience, the curtain went up, lights came on and all five Styx members began playing Lights.

During all this, the crowd, which was two-thirds American, was changing to a mob and getting closer. The railing was not only curving in under the weight but was bowing under also.

Guitarist Tommy Shaw asked the crowd to move back and allow the people up front a chance to breathe.

The crowd relented a little and Styx moved into the soft sounds and then pulsing beat of Best of Times.

The crowd again pressed forward causing more problems. Out of the wings came the stage manager and roadies to reinforce the barrier only to realize that they must also reinforce the stage. The two meters of space had suddenly become a dangerous place.

DeYoung and James Young, better known as J Y, started talking to the audience, asking that everybody move back. "Start at the back of the room," said the singer, "and move backwards, then the next group can move, then the next until the front people can move."

Slowly the crowd began to ripple as the tide of people moved backwards. "We are going to take a five-minute break," said DeYoung. "Don&#39;t worry, we&#39;ll be back," he stated to the moaning crowd. "The stage has to be reinforced. You wouldn&#39;t want the stage to collapse, do you? We want to play until WE want to finish! What do you say to that?"

To cheers of approval, Styx left the stage.

The rest of the evening, there was no more trouble. We listened to each Styx performer being highlighted &#8212; Shaw on ballads, J Y picking his guitar with his teeth in an acid rock song, DeYoung moving between keyboards and piano, Chuck Panozzo who seldom moves while playing his bass guitar and his twin, John, on drums.

It was an excellent show. The group sang Loving You from its &#39;72 album and many cuts off the new album Paradise Theater including Renegade, Grand Illusion, Fooling Yourself and Great White Hope.

While Styx played Come Sail Away, J Y led the audience in a sing-along together-with a rear screen projection of stars rotated, filling the large hall.

"We hope we have brought a little bit of America here," said John. "We like doing a good show for people. It upsets us to see people being hurt. We don&#39;t want anyone to get hurt. We came to have a good time and that&#39;s not possible when I and the other guys can see people being smashed against the railing."

According to John, he understands how people can sometimes get excited but to go beyond reason is not necessary. "I, personally, would feel terrible if anybody got hurt at one of our concerts," stated the curly-haired drummer.

"We care and our people care about us which has made us what we are today. They believe in what we do just as we believe in it," said John. "We miss home and our families and can&#39;t wait to get to Frankfurt and see American TV."

He didn&#39;t even care that the programs would be about six months behind the states, "Just to hear English is great. Being over here is an education and we are still learning. We try to do the same quality show here that we would do in the states, so we don&#39;t make much money on these gigs. But as I said, we hope we have brought a little bit of America to Europe."

To call Styx a rock &#39;n&#39; roll band would be a misnomer yet it is what people call the group. After hearing the versatility of the group, I would just call Styx good.