From the S&S archives: Sonics soar past Rockets 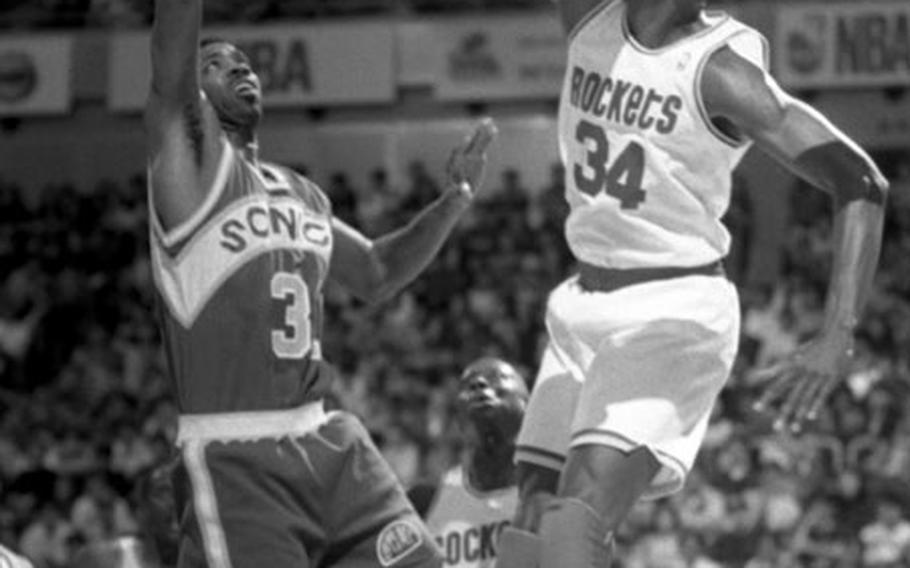 Houston&#39;s Hakeem Olajuwon blocks a shot against the Seattle SuperSonics at Yokohama, Japan, in November, 1992. (Ted Salois / ©Stars and Stripes)

Houston&#39;s Hakeem Olajuwon blocks a shot against the Seattle SuperSonics at Yokohama, Japan, in November, 1992. (Ted Salois / ©Stars and Stripes) 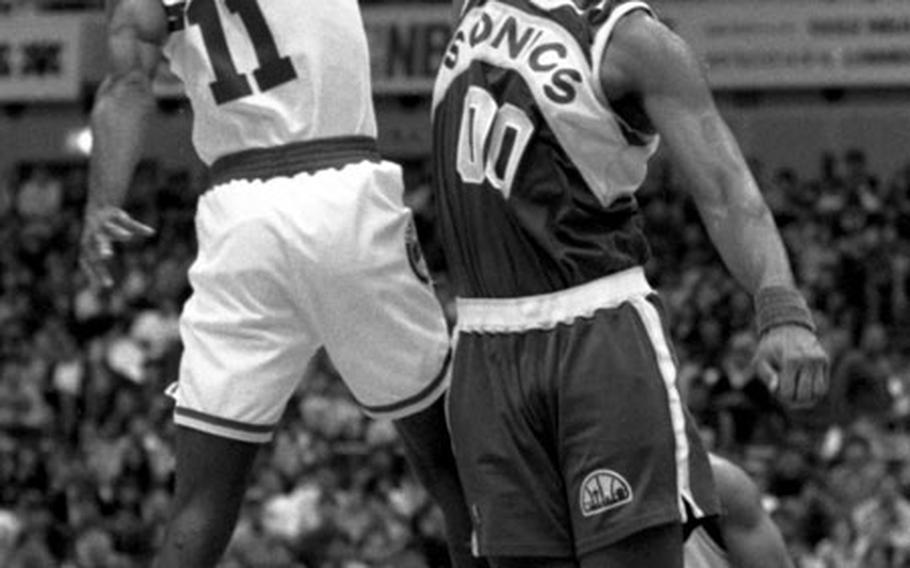 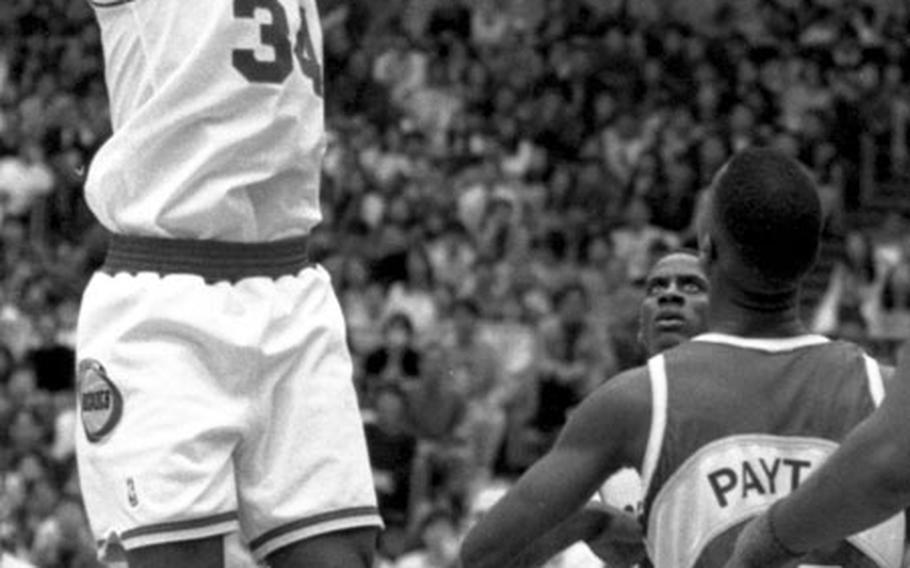 YOKOHAMA, Japan &#8212; Shawn Kemp and the Seattle SuperSonics soared to a 111-94 victory Saturday, grounding the Houston Rockets in the first of the 1992 NBA Opening Games in Japan.

Kemp nailed 29 points and crashed the boards for 20 rebounds as the Sonics and Rockets began their 1992-93 National Basketball Association seasons in the Yokohama Arena.

"When I rebound the basketball, I think I play better," Kemp said after the game. "Anytime I get 15 or more rebounds, my game improves greatly."

Ricky Pierce tossed in 19 and Eddie Johnson contributed 16 off the bench for the Sonics. Nate McMillan had eight assists, including the front end of an alley-oop to Kemp for a jam that made CNN Sports Latenight&#39;s Play of the Day.

Hakeem Olajuwon, Vernon Maxwell and Kenny Smith each had 21 points for the Rockets, but it was to little avail in the streaky game.

Both teams got hot at different times. It was the Sonics, however, who enjoyed the last streak, outscoring the Rockets 36-15 in the fourth quarter.

"It was like a dam breaking and we couldn&#39;t hold it back," said Rockets Coach Rudy Tomjanovich.

Kemp was largely responsible for the initial streak as he scored 11 in the opening quarter and led the Sonics to a 44-29 lead with 5,45 left in the half.

But the Rockets bounced back, closing to within 50-45 at the break.

"We started off slow," said Tomjanovich. "We made some adjustments in the intensity phase of the game and fought our way back. We had a great third quarter and won the rebound game 12-5."

The Sonics&#39; offense broke down as the second half got underway and the Rockets, led by Maxwell&#39;s 13 third-quarter points, built a seven-point, 77-70 lead with 1:18 left in the period.

"Our bad offense was creating their offense," said Sonics Coach George Karl. "So what I did was basically put our best offensive team on the court."

It worked. Sparked by McMillan&#39;s seven points in less than two minutes, the Sonics ripped off a 23-2 run to put the game away.

Rebounds and turnovers made the difference. In addition to being outrebounded 59-39 during the game, the Rockets gave up the ball nine times in the second half.

The two teams played to a full house of 14,544 fans in Yokohama. The game was so popular, said NBA Commissioner David Stern, that as he walked to the arena, "someone offered to buy my ticket at a very good price."

The Sonics and Rockets faced off Sunday in the final of the two-game series.