From the S&S archives:Simply Wonder-ful 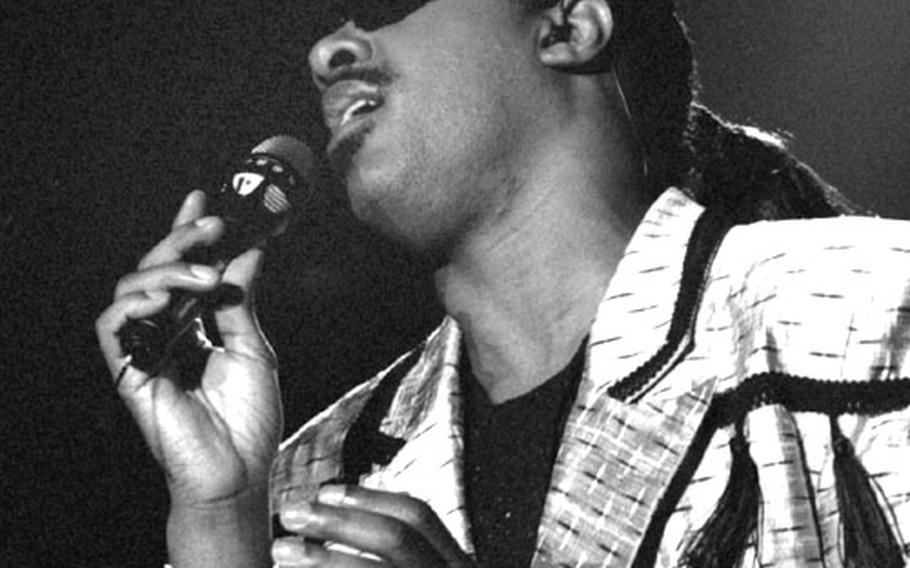 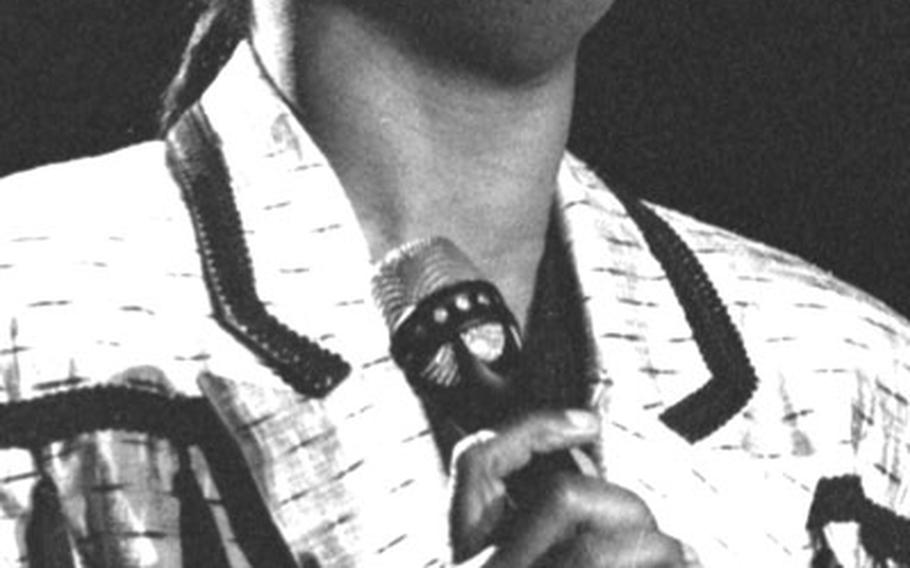 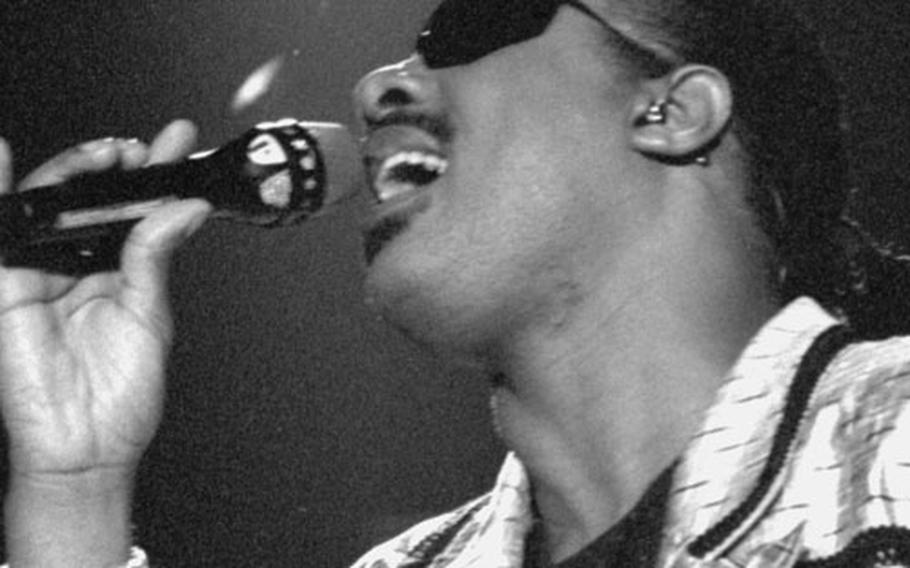 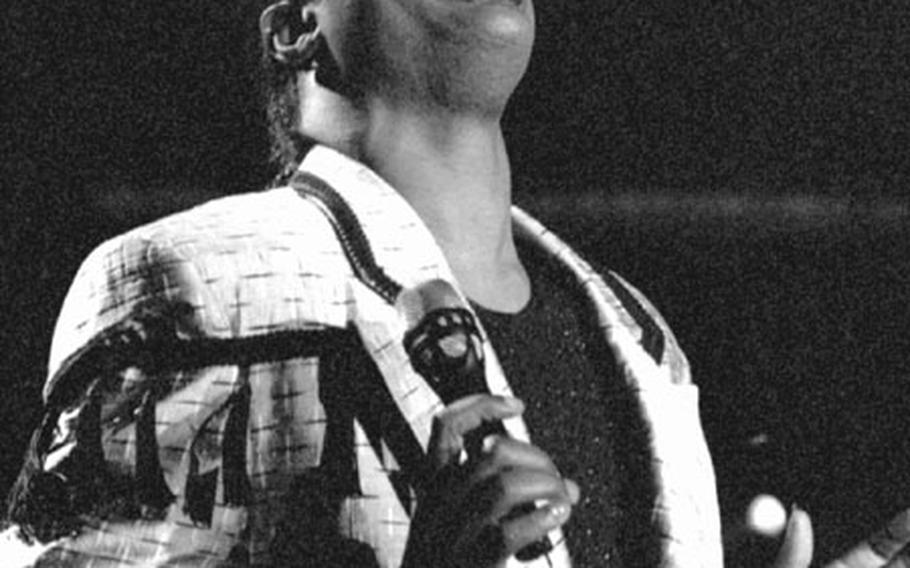 MY FIRST MEMORY of Steve Wonder is of a 13-year-old boy bouncing across a Chicago theater stage blowing a harmonica. Wearing dark glasses a dark suit &#8212; complete with high water pants &#8212; white shirt and black he, he was blasting Fingertips &#8212; Part 2, his first No. 1 record and the tune that began Little Stevie Wonder&#39;s international musical legacy in 1963.

My latest memory of Stevie Wonder is of a tall, good-looking, 39-year-old MAN with a foot-long ponytail flowing down his back

That image was etched on my memory Saturday night when Wonder, on stage at the Friedrich-Eberthalle in Ludwigshafen, West Germany, musically rocked fans in a non-stop, 3&#189;-hour concert

Wearing a silver-colored suit sprinkled with black and a sparkling black shirt, black boots and dark glasses, the singer and songwriter delivered for the enthused thousands in the audience a musical journey that spanned his 28-year career

Wonder&#39;s on-stage energy is boundless. And Saturday night was no exception.

From his worn stool at the keyboard, Wonder &#8212; backed by three singers and a six-piece band &#8212; touched on past and present hits like Higher Ground, That Girl and, from his latest album Characters, the song You Will Know.

Blind since his birth in 1950, Wonder is adept on drums, keyboards and harmonica. And when he started to do those wonderful things with his voice that only he can, the crowd reacted with appreciation.

Some say Wonder&#39;s instinct to do whatever kind of music he feels has led him into a "square circle," indicating his music of the &#39;80s has divided his audience. It&#39;s been said that those of us who grew up with Wonder and his classics of the &#39;70s dislike his mainstream &#39;80s stuff. And that the followers he attracted this decade are confused when he produces a funky tune tike Skeletons from Characters.

The mixed audience Saturday suggested otherwise Packed into the nondescript hall, fans &#8212; Germans, Americans, pre-teens to the very mature &#8212; seemed to know every word to every song. They needed no encouragement to sing along.

Following a new song, Why, Wonder was ready to party and so was the crowd. He see-sawed through a series of sentimental and funky hits, including Don&#39;t You Worry &#39;Bout a Thing, My Cherie Amour, Signed, Sealed, Delivered I&#39;m Yours, Uptight (Everything&#39;s Alright) and I Was Made To Love Her.

By this time didn&#39;t care that sweat was running down my back, my toes were cramped from standing on them trying to see over some tall guy&#39;s shoulder and that my neck had a permanent crook.

Wonder simply puts you in the mood &#8212; your lips start to sing, your body starts to move, and soon you join the rest of the crowd dancing all over the place.

Two hours into the show, after the song Fingertips, a parody of Michael Jackson and the politically-labeled Living For the City, I thought, OK, he&#39;s winding down.

Wonder simply launched into another classic from his endless repertoire.

Somewhere amid the screams and shouts, he started what I thought was going to be the sort of longwinded sermon that his long time friend Eddie Murphy has ridiculed him for.

He didn&#39;t. He acknowledged American servicemembers in the audience, thanking them for their "spirit of wanting to see peace and freedom in the world."

Wonder, a vocal opponent of South African apartheid, assured fans that he would continue to fight "to make sure everyone is free."

And the music: kept coming &#8212; You Can Feel It All Over, You Are the Sunshine of My Life, Part Time Lover, I Just Called to Say I Love You, Superstition, and much more

Ouality music from a legendary artist. I don&#39;t know how long my latest images of Wonder will have to last until the next time, but no doubt, the new ones will be well worth waiting for.