From the S&S archives: 'Shy' McClendon tells of exchange with Reagan 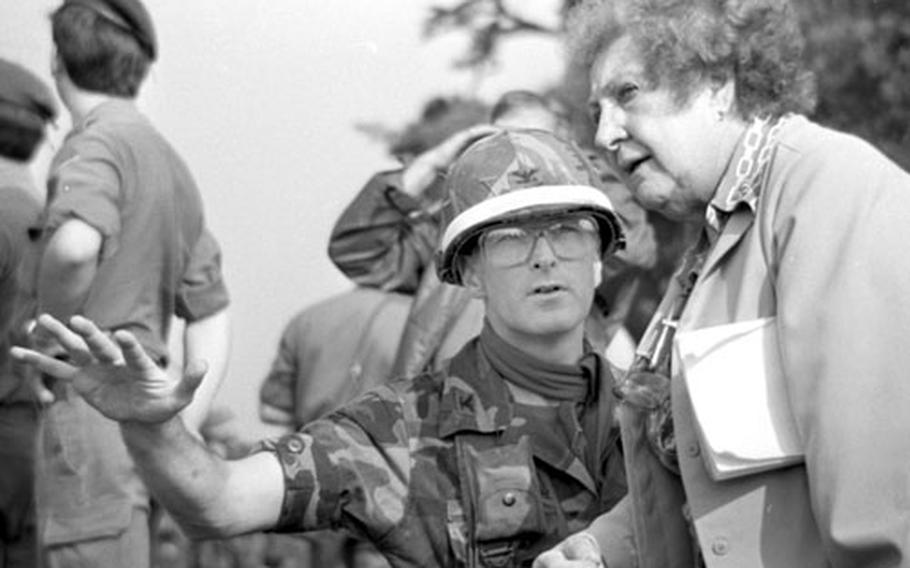 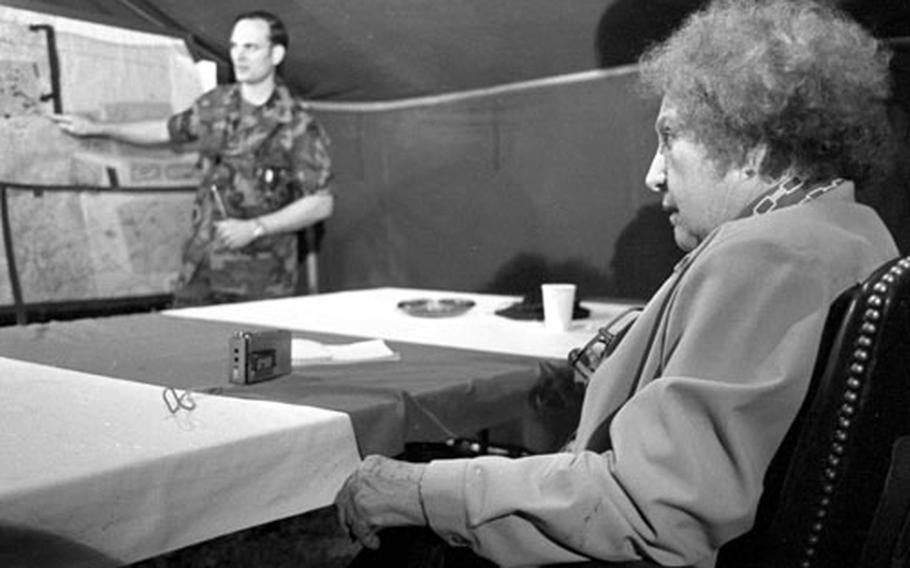 NUERNBERG &#8212; Laughter filled the Kalb Officers Club Thursday when Sarah McClendon described herself as "shy and scared to death" of the Pentagon and White House officials she has covered for almost 40 years.

McClendon was making her fifth of six appearances in Germany marking Federal Women&#39;s Week. Women made up about 90 percent of the estimated 200 people who heard the speech here.

The veteran correspondent, consultant to and former member of the Defense Advisory Committee on Women in the Services (DACOWITS) and recent appointee to a new Veterans Administration advisory board on women veterans, was in the first class of enlisted women to be commissioned through officer candidate training in World War II.

A heated exchange with President Reagan in a July 1982 televised news conference added a new note of notoriety to her already colorful biography.

The exchange resulted from McClendon&#39;s insistence on a "straight answer" concerning the status of results from a Ford administration survey of laws containing passages that discriminate on the basis of sex, McClendon said.

She said the results still have not been released and she has not stopped demanding them.

"These laws affect your lives and your salaries," she told the women. "I wasn&#39;t trying to make Mr. Reagan mad; I was doing my duty."

She urged women to be aggressive in seeking equal rights.

"Don&#39;t expect things to take care of themselves," she said. "Like we used to say in the Pentagon, you&#39;ve got to hand-process it."

McClendon also urged the women to register to vote. "With the numbers of women ... black, white, brown, yellow or whatever color, we could pick the next president," she said.

In her speech and in separate interviews, McClendon showed personal warmth, along with the determination and professionalism that allowed her to blaze a trail for women who have followed her into the Washington press corps.

"I probably never would have gone to Washington if not for the Army," she said. "They gave me telegraphic orders that said, `Be there tomorrow&#39;."

A public affairs officer, McClendon was eight months pregnant when she left the Army in 1944. "We didn&#39;t have the choice of staying in then," she said. "I was working as a civilian correspondent when my baby was nine days old. I had to &#8212; my husband left me."

McClendon is impressed by the opportunities for women in the military.

"We need more women in technology and politics," she said. "The women I&#39;ve talked to here have shown me we can make real contributions if they just give us a chance. We just want to be part of the team."

Her schedule in Europe has been hectic, but little more so than her routine in Washington, where she writes a syndicated column, appears on radio and television panels and remains active with DACOWITS.

"Sometimes I wish there were two more days in a week," she said.

She said her role as a women&#39;s advocate doesn&#39;t conflict with her professional objectivity. "I don&#39;t have to change a story I&#39;m writing or slant it to make it say something good about women. There are lots of factual stories to write," she said.

"I&#39;ve known people in government who made a difference in the whole country just by having the guts to get up and try," she said. "If I can make improvements in our country by taking an issue and working on it, I&#39;m sure going to do it.