From the S&S archives:Shibuya Hall rocks to Boones, Osmonds 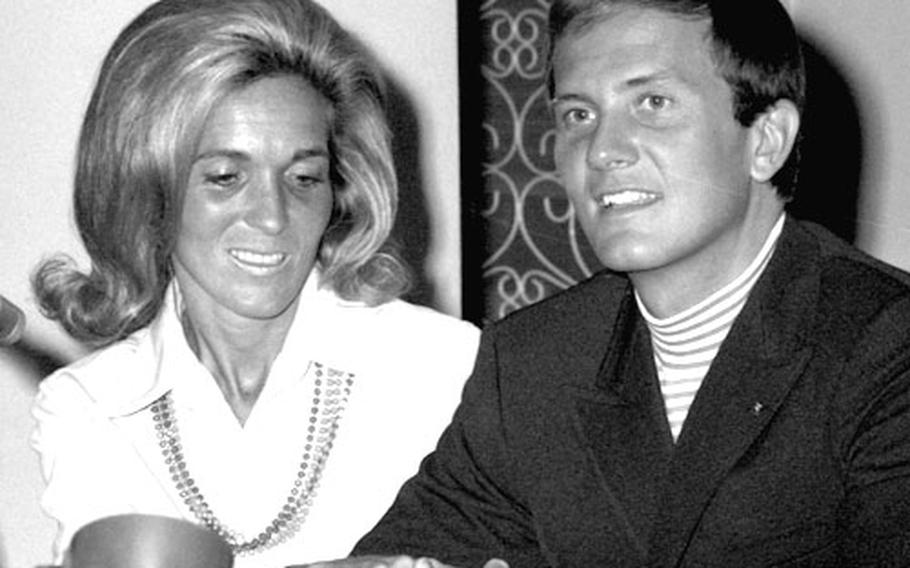 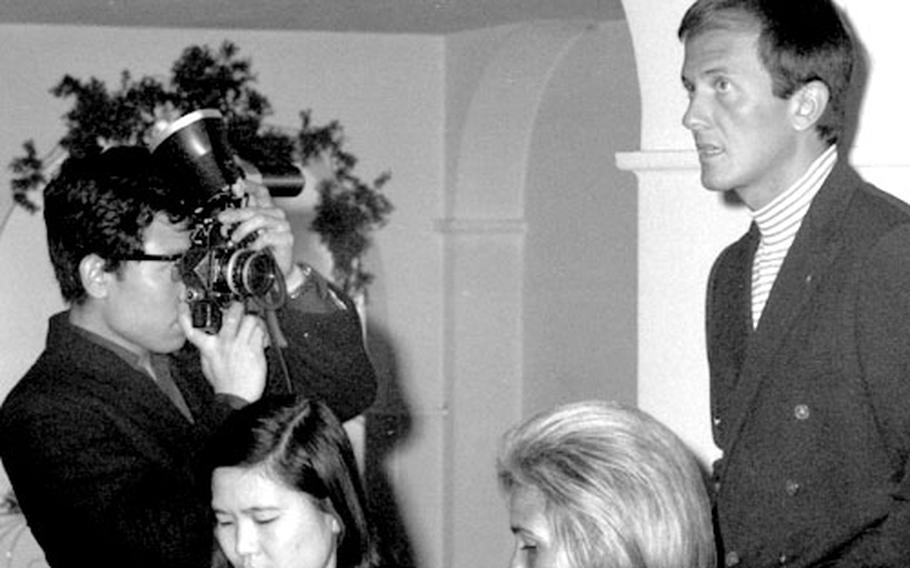 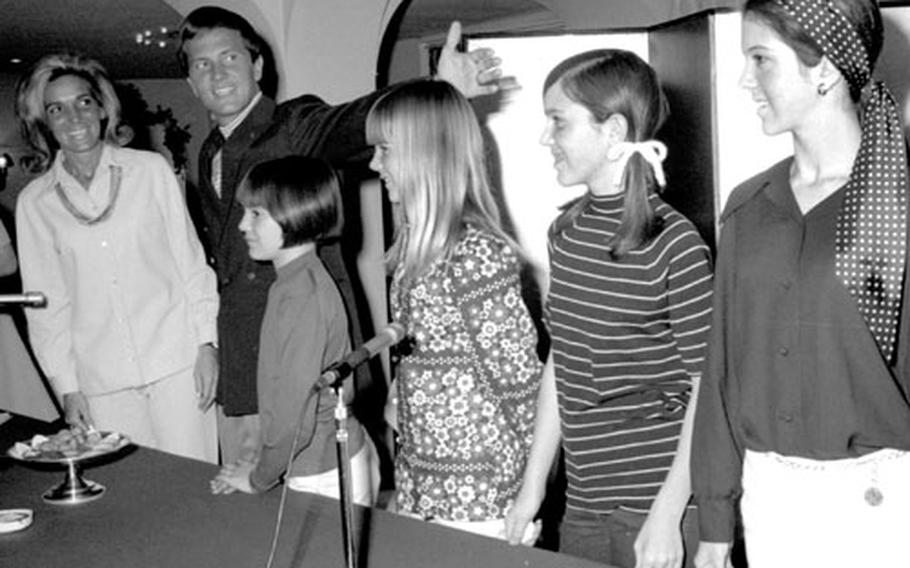 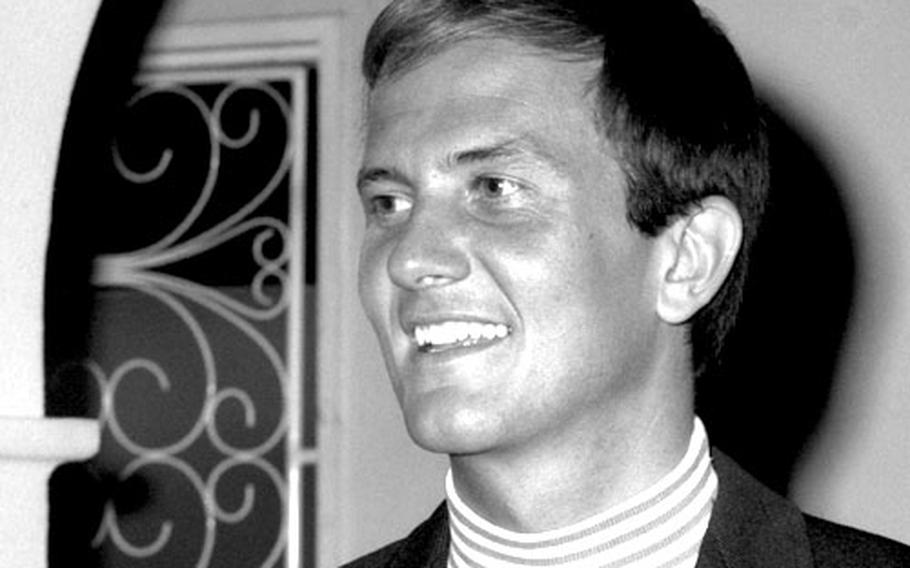 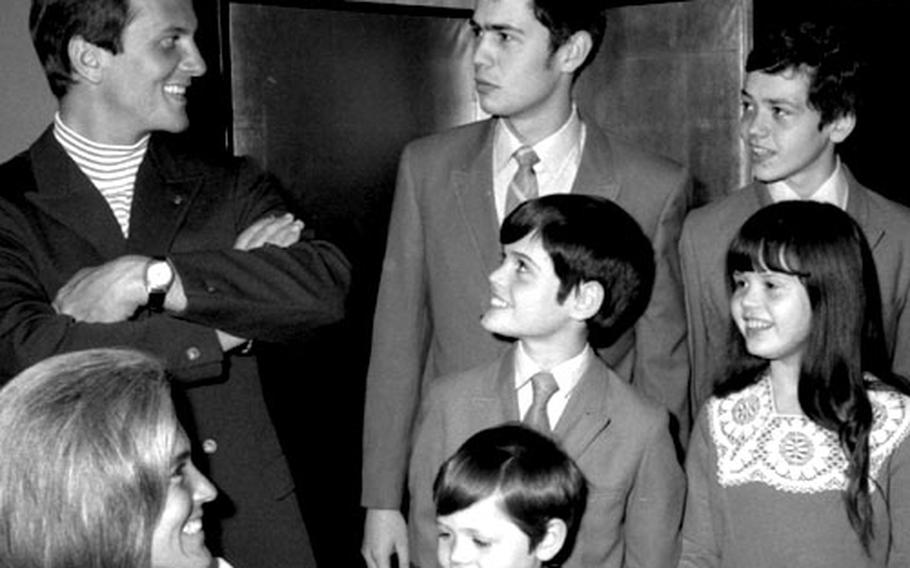 The day before they were to share the stage at Tokyo&#39;s Shibuya Hall in April, 1969, the Boone and Osmond families got together for a press conference. (Hugh Copeland / ©S&S)

Boone, looking younger titan his 35 years, flashed onto the stage in a yellow-gold coat and tie, white slacks and his traditional white buck shoes. The audience was his from the start.

The generally young audience didn't always seem to understand what Boone said, but they quickly recognized song names, especially those made famous by Boone himself.

Boone, projecting a relaxed, easygoing mood, smoothly flowed through several standards as well as such recent hits as "Hey Jude" and "For Once in My Life."

For the first time the personable singer was joined on stage by his wife, Shirley, and their four daughters.

The couple sang a sensitive version of "True Love" after which the Boone sisters took over with the likably smooth "What the World Needs Now," while the visibly proud parents looked on.

Boone was preceded on the program by the Osmond Brothers who gained popularity through the Andy Williams TV show. The five brothers ranging in age from 11-19 set a fast pace as they demonstrated versatility and professionalism

The talented group showed definite style in singing, dancing, playing saxophones and banjos and producing their own rock sound which would rate with the best around.

They were joined for one number by their 9-year-old sister, Marie. Five-year-old Jimmy Osmond sang lead in a rocking version of "I Dig Rock and Roll Music."

Every facet of entertainment by the family group is accomplished with a definite professional style.

The Osmond troupe joined the Boone family in a handclapping finale, "Wonderful Time" in which the audience readily joined.

The Boone family and the brothers will be at the New Latin Quarter Monday and Tuesday and then move over to the Copa Cobana for a late show Thursday night.

The only American clubs where they entertain during their 15-day tour are the Yokota Officers' and NCO clubs and the Tachikawa Civilian Club next Saturday.

The troupe will perform in Kyoto, Nagoya and Osaka before returning home around April 25.