From the S&S archives: Redd Foxx: Just eating the noodles 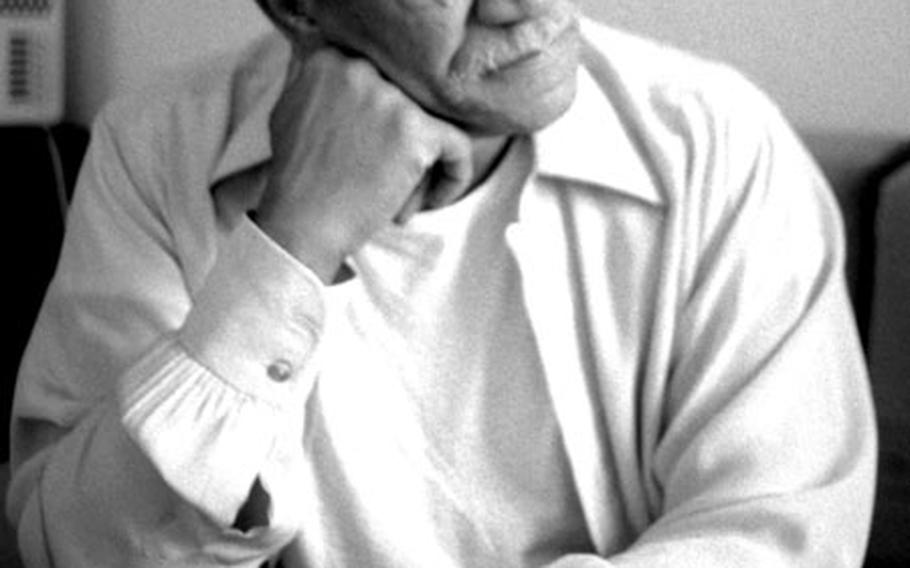 Redd Foxx, during a 1976 interview in Frankfurt, Germany. (Dan Warfield / ©Stars and Stripes)

A SLEEPY Redd Foxx answered the hotel phone and said to come on up. A little fuzzy around the edges in the morning sunshine, he wasn&#39;t quite used to the nine-hour time difference between Frankfurt and his home of 25 years, Hollywood.

He said to be sure to write there was no woman in his room at 10 a.m., and complained about the solitude of touring the bases in Germany.

Foxx admitted to some personal satisfaction in playing the bases.

"To my way of thinking they both more or less run parallel to each other. There&#39;s a certain amount of confinement. I think I can help them with my presence, you know, help a guy do another three, four months.

Foxx, the star of Sanford and Son, has worked as a comedian for decades, putting out night club entertainment and 52 party records that have earned him a reputation for talking dirty that he says is undeserved.

"There&#39;s always double entendre, innuendo or implied things to a situation. Twenty years ago was too soon to do that kind of stuff. Now you take guys like Richard Pryor, Buddy Hackett and the rest of them, you catch &#39;em in Las Vegas and they say the real true thing. They say words I&#39;ve never used in show business. And I just wonder where in the hell did I go wrong, because the party records kept me off TV a long time ago due to the raunchy reputation I received.

A sample of what he calls "Redd Foxx humor":

Malcolm X, one of the strongest black voices of the &#39;60s, mentioned Foxx in his Autobiography. They were friends before either was famous. Has Foxx changed a lot since those days?

Malcolm gave up a life of crime for the Black Muslims, and later, after a pilgrimage to Mecca, abandoned Elijah Muhammad&#39;s separatist doctrines for the more traditional Islam he found in the Middle East and Africa. Malcolm was murdered in 1965 in New York. Foxx never joined the Muslims but he still speaks almost reverently of Malcolm.

Did Foxx have to make painful compromises to break into TV six years ago with Sanford and Son?

"The show has deteriorated a little bit, I think, from where we first began. We had some awful beautiful stories, you know."

Sanford and Son is in the past for Foxx, who has signed up for a variety series with ABC. He said he didn&#39;t mind laying Sanford to rest.

"Now it&#39;s gone kinda hokey. I&#39;m sorta glad to get out of it. But it&#39;s still entertainment. To me it&#39;s not a putdown. I feel good every time I come on television and I can portray a role of a guy that has a place of business and is not livin&#39; on the government.

"That&#39;s where it metes out for me. I&#39;m not on the government, I&#39;m not seeking help or relief from anyone other than my son. You can look for help from relatives more so without feeling guilty than you can going down to sign up &#8212; like my own career.

"As bad as I&#39;ve done waiting for that moment to come for me to be successful, I worked hard at my trade. Sometimes it was bad, but I never went down and signed up for a dime of that money that you get from the government for doin&#39; nothin&#39;. Never in my life.

"So I feel proud that my own life was like that. Just like Sanford, I don&#39;t want nothing from nobody I can&#39;t hustle up for myself. And each week when I try to hustle up 10 or 15 bucks from someone, I lose, which gives the kids a story to go by, a parable. You know, if you&#39;re gonna cheat you&#39;re gonna lose.

"And I feel good about that."

The new show on ABC will be an hour per week of "something new.

"I think it&#39;s gonna be a little bit different than what you&#39;ve seen, because bein&#39; the first black in a position to designate what goes on, I want to give them what I saw in show business.

"I want to try to give the public something they haven&#39;t seen. Different faces, people that I know, different situations. And myself, I&#39;ll be different, &#39;cause I can sing a fair tune and used to hoof a Iittle bit before my knees got bad, and I know some hoofers &#8212; I know a guy who can eat a Coke bottle.

"You never saw that on television.

"I wanta get a guy right at dinner time and let him eat a Coke bottle, I mean the whole Coke. He drinks the Coke and then chews the bottle up. I&#39;m saving that.

"I never had another show of any kind before I had Sanford.

"So you figure that out for me and then I&#39;ll tell you something.

"What if I&#39;d been given the opportunity before then to be a actor? I&#39;d be in the category of George C. Scott and the rest of those guys.

"If you can pick a few between the lines, you&#39;ll know what I mean.

"Twenty-five years in a city that&#39;s what your trade is. all about, and you never were a part of it till six months ago?"

"I got paid the smallest amount of money, but the part I had got me Sanford and Son.

"I had to do something. Sanford and Son was it, first shot.

"Last week a guy was casting a show and he&#39;s asking me, didn&#39;t I think the kid for the show was a little light? I said, `How can you even think in those terms, man, when the black society &#8212; we&#39;re the chocolate rainbow, you got all colors of brown and beige and light and yellow and damn near white, so how can you even bring that up nowadays?&#39;

"I tell them, `Don&#39;t write dialect for me. I talk bad enough already. My folks were from Mississippi and I learned English from them, not from a schoolteacher, &#39;cause I didn&#39;t spend enough time in school. If my parents had been living in Massachusetts I&#39;d sound like Kennedy, you know.

Redd Foxx, a long way from St. Louis in 1922, where he came into the world in considerably less style than he plans on leaving it, a hustler, a highly successful survivor, a profoundly sincere man with a gravelly voice surrounded by several hats, a few big suitcases, stark motel furniture and a view of German trees stripped down for winter.

He looks a little older in the flesh in the morning than under makeup on the tube, but it hasn&#39;t affected his cynical smile.